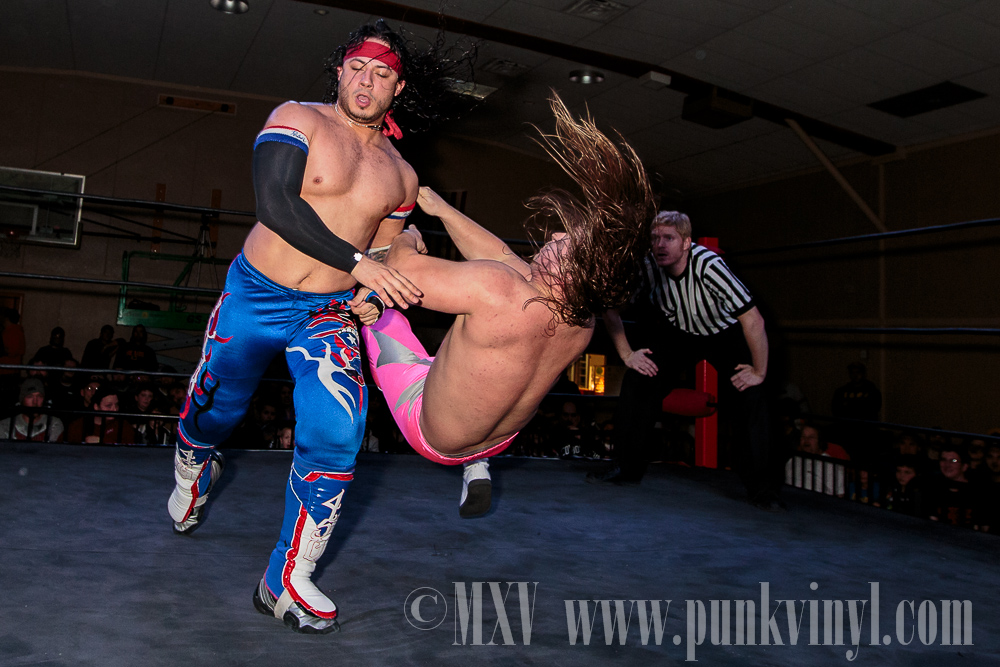 The last Saturday of the year also marked the final Pro Wrestling Blitz show of 2012. Dubbed The King of Joliet, the event featured a singles tournament to crown the “King”. Many of the Blitz regulars participated along with a wrestler who only joined the roster a few months ago. The show drew a large crowd which was made easier by the special low ticket price and many regular fans ventured out in the cold to enjoy a fun night of wrestling.

The show started off with a tribute to Fabulous Freebird, Buddy Roberts. Buddy was a legend in the wrestling business and as one-third of the Fabulous Freebirds, he was in one of the greatest heel teams of all time. The Freebirds were one of the first “cool heel” teams that people hated but loved. Buddy passed away last month and his son, Buddy Roberts Jr. has been wrestling for Blitz for a while now and making a name for himself.

After the tribute video ended the tournament began and the first match was Judas (aka: Justin Reno) vs. Buddy Roberts Jr. Judas came out with the Ringmaster and was dressed up like a demented court jester. The former Justin Reno was recently captured and brainwashed by the Ringmaster and the Three Rings and transformed into Judas. When Buddy Roberts Jr came out he received a warm response from the crowd. Roberts took the mic and tried to talk some sense into Reno/Judas and get through his brainwashed haze but only got attacked by Judas for his troubles.  Buddy put up a good fight and controlled a lot of the match until Judas got frustrated and grabbed a chair and attacked Roberts. The ref called for the bell as Judas proceeded to pummel Roberts with the chair focusing on his ribs and midsection. Roberts won by disqualification but was far worse for wear after the beating.

Zach Thompson faced Hardcore Craig in the second tournament match. Craig has been feuding with Thompson and the rest of The Elite for the past few months and was eager to get his hands on Thompson, who was accompanied by manager Rinaldo Piven. Craig came to the ring holding some beers and when Piven caused him to spill one, Craig snapped and shoved him out of the ring and got down to the business of beating on Thompson. Craig dominated a good portion of the match but was outnumbered when Matty Starr snuck in the ring while the referee was distracted by Piven and nailed Craig with a piledriver and ran back out which gave Thompson an easy pinfall.

Ashton Vuitton came to the ring wearing a sling and carrying a chair. He was there to call out Jay Bradley but Jay wasn’t there so he used his time to reflect all the adversity he overcame in 2012 which got him all fired up and he challenged Jay to a match next month whether Ashton is cleared to wrestle or not. A rematch between the two should be a hot feud as Ashton really wants to get even with Jay for the beating Jay gave him after their match last month where Jay tried to end Ashton’s career by wailing on Ashton’s surgically repaired shoulder with a steel chair.

The third tournament match featured Jimmy Rockwell (with Kujo in his corner) against Mike Horning. Horning started off the match making Rockwell look like a fool but eventually Rockwell turned up the heat. Horning was clearly the better man this evening but in typical fashion, Kujo interfered which gave Rockwell a cheap win. The referee was of course oblivious to any of this and ignored Horning’s pleas after the match about how Rockwell and Kujo cheated.

Matty Starr (with Rinaldo Piven in his corner) took on Mr. 450 in the last qualifier match of the tournament. 450 was his usual flashy self and Matty fought dirty as usual with Piven interfering whenever he could. It took awhile for the match to actually get started as the crowd was really giving Matty a lot of grief and they were absolutely in love with Mr. 450 who got one of the two biggest responses of the evening. The two had a lot of good back and forth action which led to Starr cheating to try to win his match but Hardcore Craig came to make the save and gave Starr and the Elite a taste of their own medicine by laying out Starr while the referee was knocked down and giving 450 the opening he needed to finish the match with his namesake finisher. The crowd ate it up like candy and popped big time for Craig’s involvement and 450’s finish.

Tony Scarpone came to the ring along with Billy Whack and Chazz Moretti and the new Blitz commissioner was announced. It was a fairly close race but unsurprisingly, Chazz Moretti was elected. Chazz thanked the crowd and as his first order of business asked that Billy Whack be escorted out of the arena. Chazz promised big things for Blitz as he left the ring to start his new job.

In a three-way tag match, The Three Rings (Grinn and Machine) took on If Looks Could Kill and Colin Cambridge & Deron Banks. The match was a little sloppy and one of the teams seemed a little green but once it got further along into the action things clicked better. Grinn and Machine mostly dominated the match and in one spot Machine gave a spinebuster to both Cambridge and Banks, piling them on top of each other and pinned them both. Machine also put the finishing touches on the other team too after a lot of fast-paced action. The Three Rings left the ring to continue their path of domination.

The tournament resumed as the winners started facing each other and the first two were Buddy Roberts Jr and Zach Thompson. Roberts came out with his ribs all taped up from the beating he took at the start of the show and he was all offense from the moment the bell rang. Roberts threw caution to the wind and was relentless in his attacking of Thompson even though it was clearly hurting himself to wrestle. In what ended up being a failed hail Mary pass, Roberts jumped off the top rope and nailed Thompson which should have made for an easy pin however the move so badly hurt Roberts as well that he was unable to follow-up and that gave Thompson an opening to roll him up in a small package and get the win. Roberts was just too injured from the beating he took earlier to go on but certainly got the sympathy and respect from the fans for trying.

Mr. 450 was back out to fight Jimmy Rockwell and once again the crowd was really behind 450. Rockwell spent a good deal of his offense working 450’s leg to try to keep him grounded and away from the ropes and the sky where he does all his high-flying moves. He was rather successful too as he really messed up 450’s leg but 450 managed to overcome Rockwell’s offense and cheating ways. As soon as 450 won the match, Zach Thompson immediately ran out of the ring to face him in the final match of the tournament.

Thompson kept up the attack on 450’s leg and really went to town on it trying to wear him down and get the win. 450 persevered and did his best to keep fighting and trying to adapt to a different method of offense as he couldn’t run or jump anymore. He was mostly relegated to countering wherever he could and find openings in Thompson’s attacks to try to turn the tables on him. After a hard-fought battle, 450 managed to put Thompson in some sort of key lock style hold and after a couple of mins of fighting to get out, Thompson had no choice but to submit. Mr. 450 won the match and the tournament and was declared the new King of Joliet and was given, nothing! No crown, no scepter, no plaque, nothing! He did get a huge ovation from the crowd though as he left the ring to go search for his new kingdom.

In the main event, Ryan Slade put the Blitz title on the line against Ruff Crossing. These guys had a very hot feud that led up to this match and the fans have been wanting it for months. After Ruff Crossing came to the ring, Slade soon followed and was accompanied by both Rinaldo Piven and Matty Starr. Chazz Moretti came out and declared that both Piven and Starr are banned from ringside and forced them to leave so it would be a fair fight. Once they left, Ruff and Slade started beating the crap out of each other outside the ring before the bell even sounded. They fought their way through the entire building giving the fans a really up close view of their fight as they battled from one end of the building to the other and back again before they finally went back to the ring and the bell sounded to officially start the match.

Both men were fired up and both threw everything they had at the other one in an attempt to win the match but neither man would stay down. They beat themselves silly and neither man could keep the other down for more than a two count. When Ruff finally hit a huge tombstone pile driver on Slade, Piven came running in from the crowd and tried to interfere, as did Starr. They were chased out quickly and Slade got the upper hand again after these distractions. Ruff took a good beating but kept giving it back to Slade and finally found an opening he needed to nail Slade with another tombstone and got the win. The crowd went nuts as the referee declared Ruff Crossing the new champion and handed him the belt. Ruff took the belt with him and went out into the crowd to celebrate with all the fans watching and stuck around to take photos with them as well. The fans went home happy at the crowning of a new champion and at Slade and The Elite finally getting their comeuppance which was a very satisfying way to end the year.

Check out additional photos from The King of Joliet here!