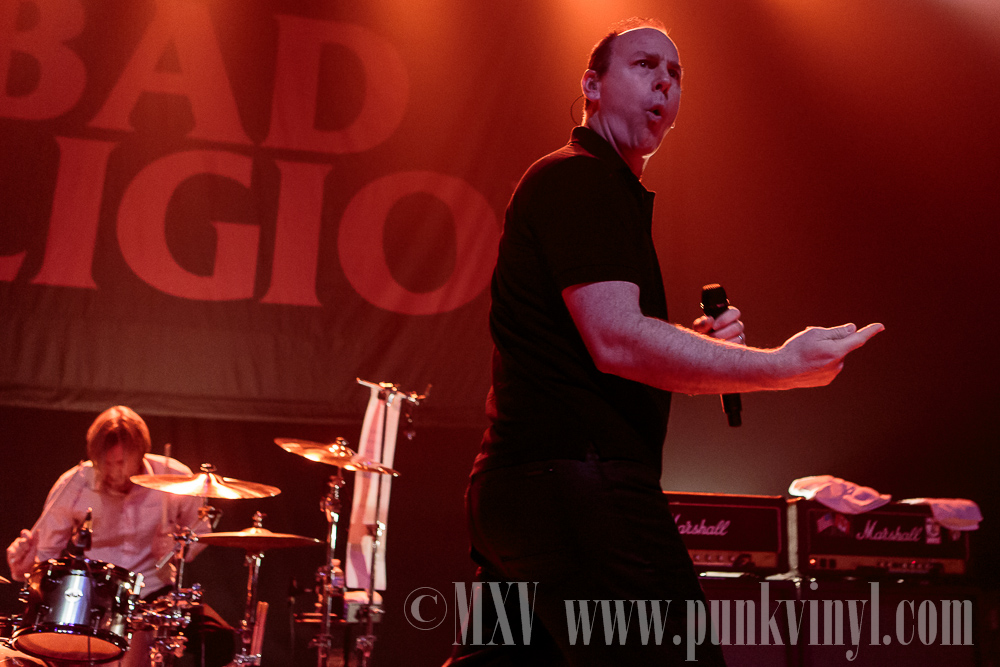 A few thousand punk rock fans spanning multiple generations packed the main floor of the Congress Theater on Friday night for a three-band show headlined by Bad Religion. The show was originally supposed to include Against Me as well but the band had to cancel off the tour before it got started, much to the disappointment of a lot of fans, especially the younger ones. That didn’t stop many people from attending however as the main floor was pretty much packed full from front to back.

Polar Bear Club went on first. They went over well with the younger folks in the crowd. They were pretty straight-forward melodic punk/rock by the numbers. They played with a lot of enthusiasm and energy but it just seemed lost on the older generation of punk fans who clearly were there solely for Bad Religion.  They played about a half hour and it seemed to move by fairly quickly.

Next up was The Bronx. They played faster and with more punch than the band that preceded them and they had a lot of fans in the audience. Their 45 minute set was pretty enjoyable for the most part and the younger folks especially went nuts for them. They were about a strong of a band leading into Bad Religion as you could have wanted.

It had been almost two years since Bad Religion last played Chicago and the crowd was more than ready for them. The band came out to a dimly lit stage and started their set with “Past is Dead” which is a track from their new album, True North. It sounded excellent and the band were off to a good start. What came as a most pleasant surprise was that they followed it up with “We’re Only Going to Die” from their first album. That’s easily the best song on that album and with such a large catalog of songs to choose from it was awesome that they picked it.

From there they played some more new songs and then mixed in a healthy selection from their vast back catalog. The sound seemed better than usual for the Congress. The main floor near the front was steadily moving with people moshing and crowd surfing and the band put on a spot-on performance. In between songs, singer Greg Graffin talked a fair amount between certain songs as well which was fairly amusing at times.

The band played a ton of songs, there were plenty of stretches of multiple songs where they just blasted into the next one after completing one and there was never a dull moment in their 70+ minute set. The band even came back for a four song encore and left the crowd sweaty and exhausted when they called it a night and left the stage for good. Overall it was an excellent way to spend a Friday night for punk fans of all ages.