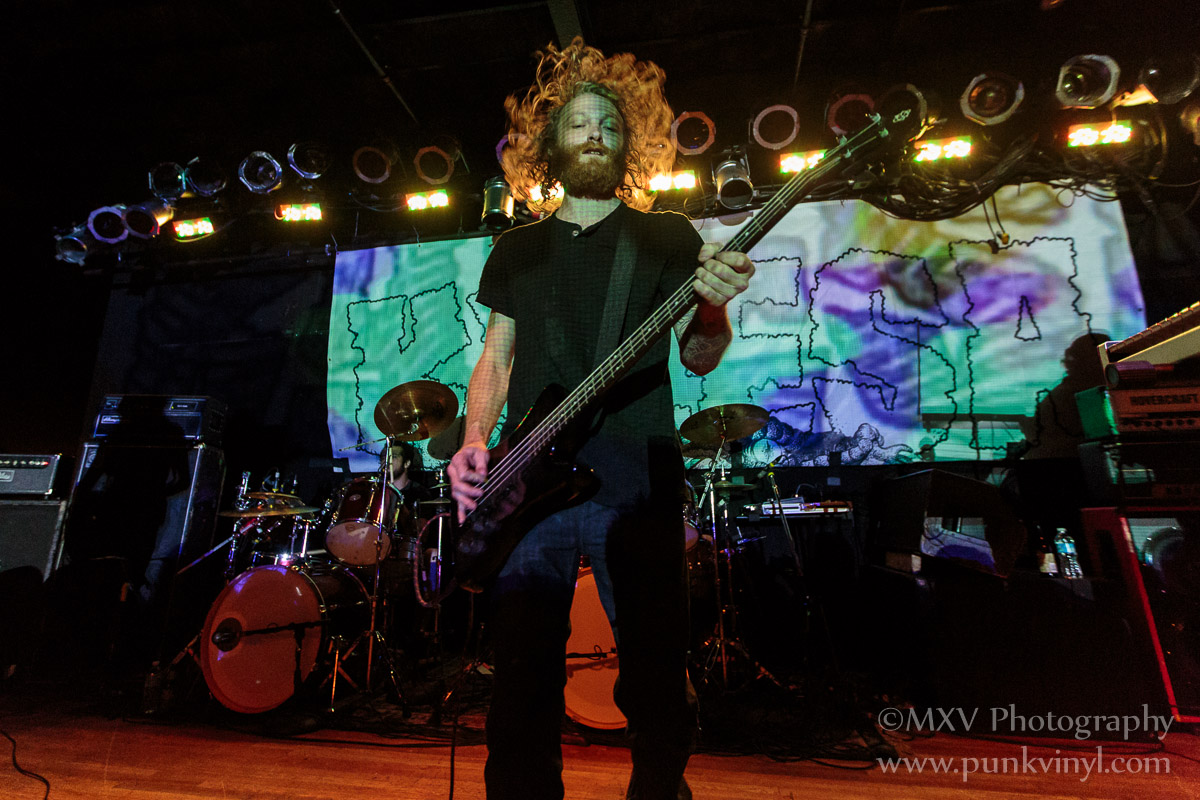 Wednesday night over in the West Loop, the Bottom Lounge hosted the return of Kylesa to Chicago. It had been awhile since they last played here which was out of character for the band as they tour quite often and seem to come though town regularly. They finally hit the road recently to support their amazing new album,Ultraviolet.

First up was Lazer Wulf. This instrumental trio played some really heavy and fast-tempo songs with a lot of changes and interesting riffs. They were a little reminiscent of early Don Caballero except these guys were heavier and packed more of a punch. They played tight and really had a great, powerful sound which comes across way better live than on their record. You really couldn’t have asked for a better way to start an evening of heavy music than these guys and those who showed up late to the show really missed out.

Next up was White Hills. These guys played really cool space rock/stoner rock with a great guitar sound. Their songs were a little on the long side and were both energetic and groovy. The male/female trading vocals was a cool dynamic and these guys put on an amazing set and won over the entire audience. Great stuff!

Blood Ceremony took the stage quickly. These guys mixed heavy Black Sabbath styled riffs with female vocals and keyboards. The  singer also played the flute. It was an interesting dynamic and they were entertaining however they suffered from many of their songs sounding very similar to each other.

After some sound checking the stage lights dimmed and Kylesa took the stage to what grew to be a pretty sizable crowd. They opened with, “Tired Climb” from their last album, Spiral Shadow and it was evident from this first song and how well it was played that the band was in top form. They had two drummers in the back laying down heavy beats and up front featured the alternating vocals (depending on the songs) of Laura and Phillip, both whom also provide the guitars. Phillip was also behind a big setup of effects pedals, a keyboard or two, some string instrument constructed on a skateboard and a theremin.

They quickly followed with “Said and Done” and then kept the pace going strong with selections from the past couple of albums. They paused for a drum solo that was done by both drummers simultaneously which segued into the high point of the set when they played, “Unspoken” off the new album. This could be the greatest Kylesa song ever written and it is a good example of how the band has evolved in their songwriting and sound with their latest album. The band has always been good but with this new album they found something really special and have entered the realm of greatness. The other songs they played from the new album sounded equally great and the hour or so set seemed to fly by in a matter of minutes.

The band came back out for an encore after leaving the stage because the crowd demanded it and they played a couple more songs before calling it a night. Of the many good shows Kylesa performed here, this was easily their best and hopefully they won’t be gone for so long this time before they come back and play again.