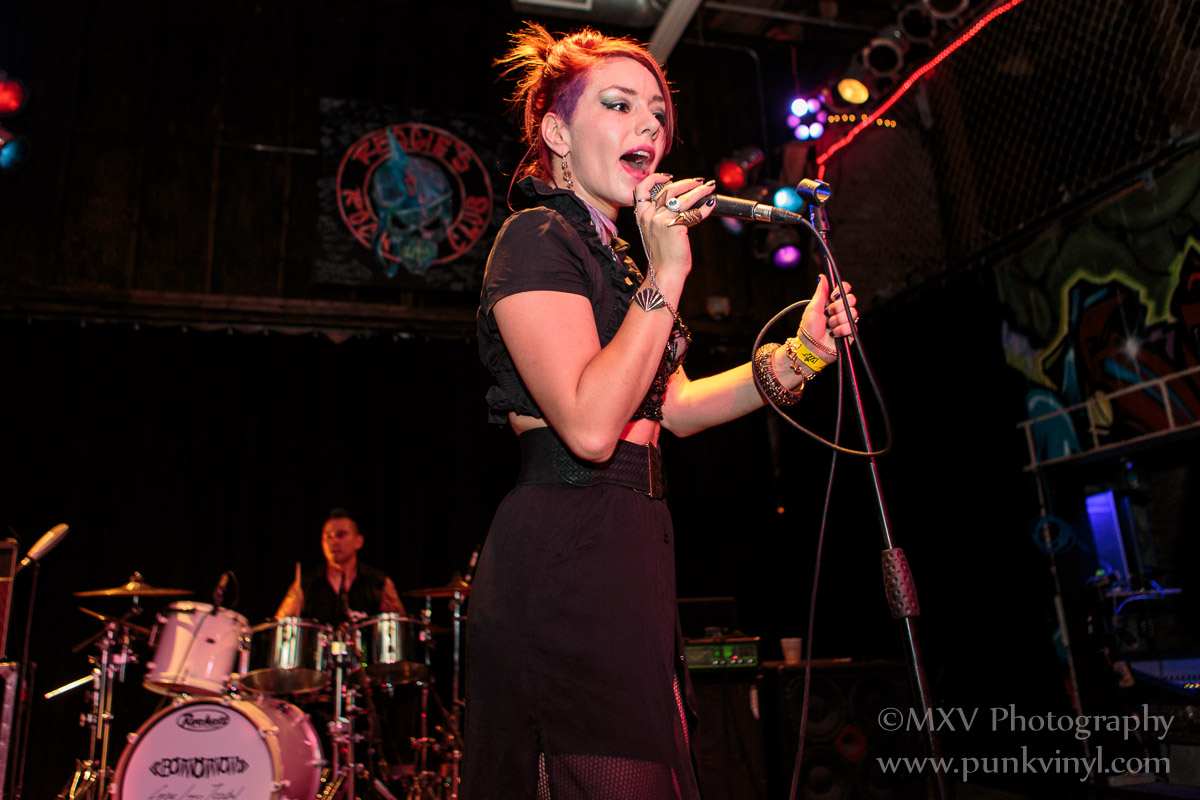 It was 80’s prom theme night over at Reggies on Thursday night when two 1980’s bands teamed up for a show. Bow Wow Wow and Gene Loves Jezebel  hit the road on a joint tour and the air was thick with nostalgia inside the confines of the South Loop’s best club.

First up was The Handcuffs. These gals and guy were no strangers to the Reggies stage and just like their last appearance, they totally won the crowd over with their catchy rock songs. Their drummer was especially entertaining to watch as he was very animated and did a variety of tricks with his sticks while never missing a beat. This band is well worth going to see and having them start off the night was a wise choice and they really warmed up the crowd.

Next up was Gene Loves Jezebel, or part of what’s left of them anyway. Apparently years ago the twin brothers who were the core of the original group split up and both of them tour and record as Gene Loves Jezebel in different countries. The version this evening was the USA based one with Michael Aston. He was the only original member and with him was the bass player and current drummer of Bow Wow Wow as the rhythm section and some new guitarist. Michael seemed a little worse for wear from the past couple of decades and seemed a little out of it. The band was pretty spot-on and depending on which song they were playing Michael either was disjointed or he was on the mark channeling his younger self. They seemed to avoid playing most of their popular material though they did play their two most popular songs, “Motion of Love” and “Desire”. It was an OK set for the most part but the crowd seemed to have trouble getting into it and most of them just looked puzzled.

Puzzling was a running theme that continued with Bow Wow Wow. First the three musicians came out, only one of which was an original member (bassist Leigh Gorman). They played an instrumental number to open the show and when they were done it was time for the singer to come out. People cheered until they noticed that the woman who walked out on stage and took the microphone wasn’t Annabella Lwin and was instead a younger woman. They played “C30 C60 C90” and while the band was playing spot-on, it just wasn’t Bow Wow Wow without Annabella. The new girl had a good voice, was attractive and did a great job but it just wasn’t what most of the audience expected. Apparently the bass player decided to take the Bow Wow Wow name and run with it, replacing all the other members of the past. Despite the fact that the band sounded awesome and it was a strong set and a good performance, billing this band as Bow Wow Wow without the lead singer who everyone identifies the band with was more than a little misleading and less than authentic. They’d have been better off billing it as something like “Leigh Gorman presents a tribute to Bow Wow Wow as the crowd just viewed them more a Bow Wow Wow cover band than accepting it in the current form. The band played about an hour and it was fun to hear those songs, but it just wasn’t the same without the most important ingredient.