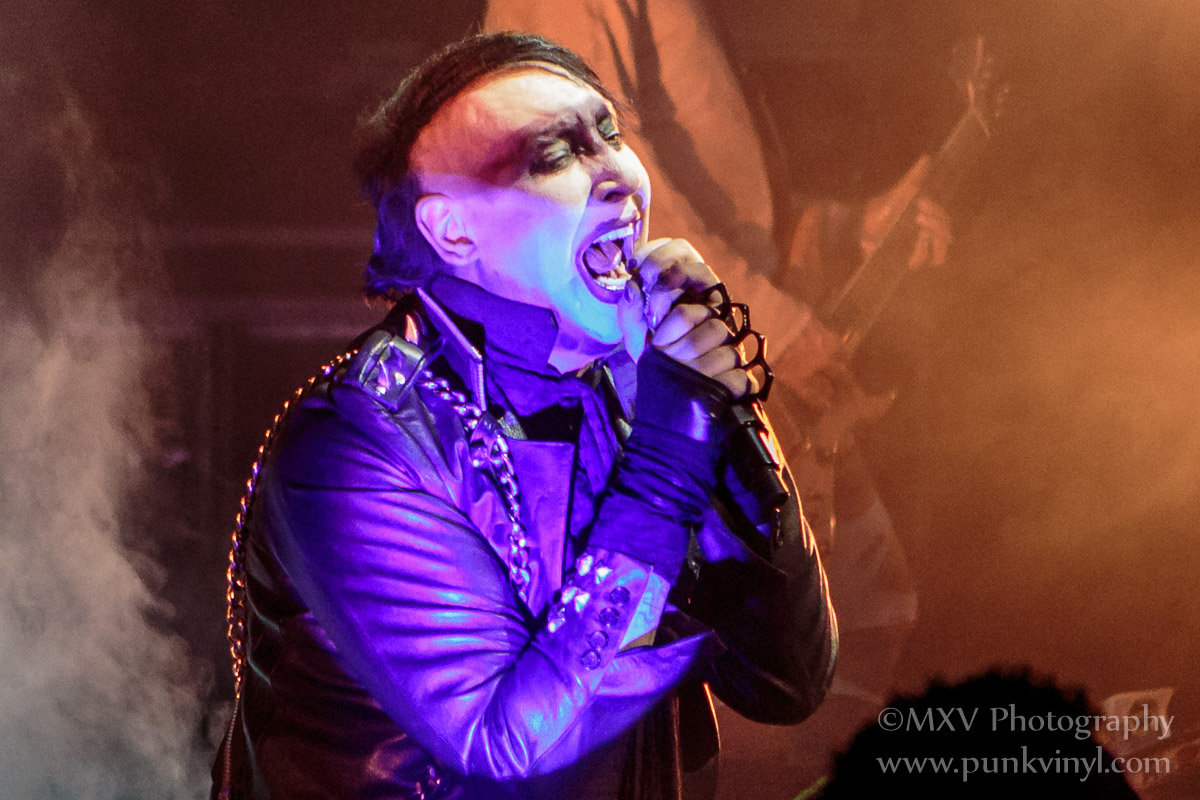 It has been a couple of years since he last toured but Marilyn Manson brought his musical freak show back to Chicago to play at the Riviera. This show was originally booked at the Congress Theater but ended up being moved to this venue a week before the show. The place was pretty full but not sold out and the summer heat was in full force as the venue seemed to have no air conditioning and it was actually hotter inside the club than it was outside. That didn’t stop fans from packing themselves in on the main floor like sardines. The heat did try the crowd’s patience though as they waited for the show to start.

The crowd was getting a little irate by the time the opening band, Picture Me Broken took the stage. They were an alternative rock band with a female singer. They had a little goth and metal influences as well. They played a short, half-hour set that was pretty entertaining and it seemed to calm the crowd down enough that they stopped shouting for Marilyn Manson to take the stage. Those demands of course resumed about five minutes after Picture Me Broken left the stage.

When Marilyn Manson finally did take the stage it was covered with a giant black curtain. As the opening riffs to “Angel with the Scabbed Wings” started the curtain dropped to reveal Marilyn and his band and the crowd on the main floor got to work smashing each other and crowd surfing. The song sounded good and the show seemed to get off to a strong start but sadly it didn’t continue down that path. “Disposable Teens” was next and the vocal performance seemed a little off and sort of half-assed. The band also seemed a bit sloppy on not just this song but most of the ones to follow. Maybe it was the excessive heat, maybe it was just a bad night for the band (they certainly had a bad one last time they blew through town on the Rockstar Mayhem Fest where their performance was lackluster to say the least so it seems more than coincidental that they were off again this time), but whatever the case it just wasn’t very good. This was especially evident in “Great Big White World” where not only were Marilyn’s vocals less than stellar but the guitar playing was weak as well and the song lacked the punch and magic of its studio recording.

In between songs there was long breaks where Manson would change outfits into something different that pertained to the particular song that they would play next. “Dopeshow” which should have been a highlight was one of the weakest numbers of the night. Manson barely said anything between songs, would often just throw down the microphone and walk off stage between songs and just gave off this vibe that he was completely uninterested in what he was doing. They plodded through a very safely constructed set list of popular songs from their three best albums (Antichrist Superstar, Mechanical Animals, and Holy Wood) and when they finished up their set with “Beautiful People” which featured confetti canons spraying the entire venue during the entire song, they just casually left the stage with little fanfare and not so much as a thank you. There was no encore, the lights just came on and that was the end.  What was on paper a potentially good show and set list was tainted by a very lackluster performance in the stifling heat leaving one to wonder if maybe Marilyn Manson has exceeded their sell-by date or maybe the band’s extracurricular activities are taking its toll on their ability to perform. Either way the show was a major letdown from a band that put out some really great records in the past.