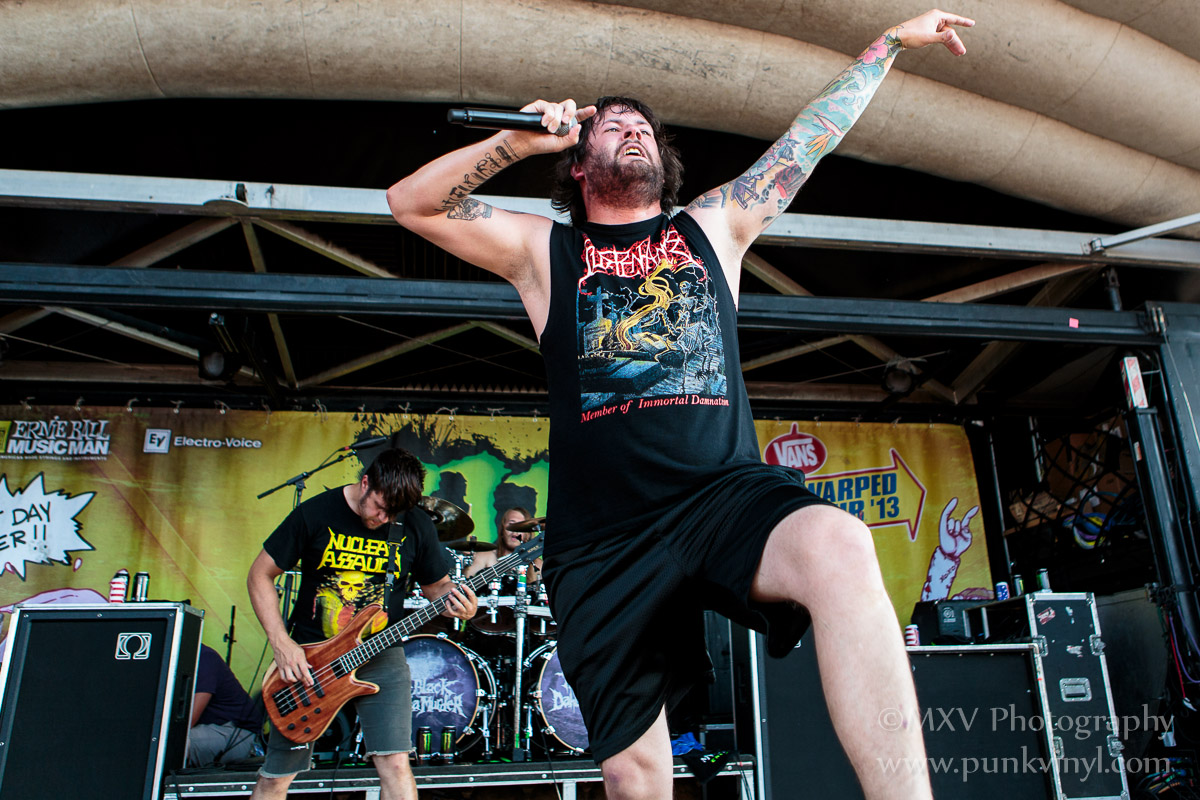 There’s two constants when it comes to summertime and that’s humidity and festivals. What has to easily be the longest running festival perhaps in history is making the rounds and that is the Vans Warped Tour. It made a stop in Tinley Park, IL in its usual place, The First Midwest Bank Amphitheater and if featured plenty of new faces and repeat offenders and as usual it also drew a gigantic crowd.

This year there was some differences from prior years most notably the absence of the skateboard ramp. Every year they would have local skaters compete on a metal halfpipe but sadly it wasn’t anywhere to be found this time. Watching the skaters was a nice way to break up the monotony of non-stop bands in every corner and it always drew some really talented skaters. This year they shifted the stages around and two of the stages which most of the popular bands played were next to each other in a setup similar to the two outdoor stages of the Rockstar Mayhem Fest. This made things easy for people who favored a lot of the bands playing those two stages as they didn’t have to travel very far to get from one stage to the next.

There was about a half-dozen stages spread out throughout the outdoor arena that had bands playing nearly non-stop and between them all was a ton of merchandise booths and food vendors. Many bands did signings are their merch tents at specified times and many of them drew huge crowds of people who lined up waiting to get an autograph of their favorite bands. There were plenty of companies doing giveaways of all kinds of things from clothes to compact discs to condoms and there were people everywhere as far as the eye could see in any direction. The tour in general draws a younger demographic, especially in recent years but among the teenagers and people in their early twenties you could also spot plenty of parents (who were let in for free this year which was a nice touch) and even a few older music fans (though they were pretty scarce).

The larger stages that featured a lot of return acts had big crowds packed in front of them all day long. For the alternating stages huge crowds of gathered by the empty stages and simply waited for the next band they wanted to see to play  so they could have a spot as close to the barricade as possible. These huge crowds were mainly full of excited younger fans who had no shortage of energy which they let out in the form of mosh pits and crowd surfing. The security staff, which was quite large at each stage, got in about a month’s worth of exercise pulling crowd surfers down gently as they were passed over the barricade. That alone is a hard enough job but couple that with the 90 degree heat and that’s quite a daunting and thankless task. Speaking of the heat, it did take its toll on some of the audience who weren’t smart enough to stay hydrated but each stage had a medical tent near it where they were giving care to people who either got really banged up and injured in the ridiculous practice of the human bumper cars they pass off as moshing or if they got heat stroke. They were very on top of giving care to anyone who looked worse for wear.

As for the bands this year there were a lot of acts returning who have become regulars the past few years such as The Wonder Years, Blessthefall, Chiodos, and Summer Set. One of the standouts and the only death metal band on the tour, The Black Dahlia Murder was a real standout and a nice change of pace. The bands mostly fell into that pop, screamo, metal/screamo type category on the bigger stages and they drew huge crowds. Walking past the smaller stages you could hear other styles of music like dubstep and hip-hop being played by up and coming bands hoping to get noticed by the waves of people walking back and forth all day long. While it isn’t an accurate description to say there was something for everyone at the Warped Tour, it is a safe bet that there is something for nearly everyone under the age of  25 as nearly every act on the festival was one belonging to the current generation and that generation wouldn’t have it any other way as a scan of any given section of the crowd revealed nothing but smiles as far as the eye could see and the festival once again was the highlight of thousands of younger music fan’s summer.