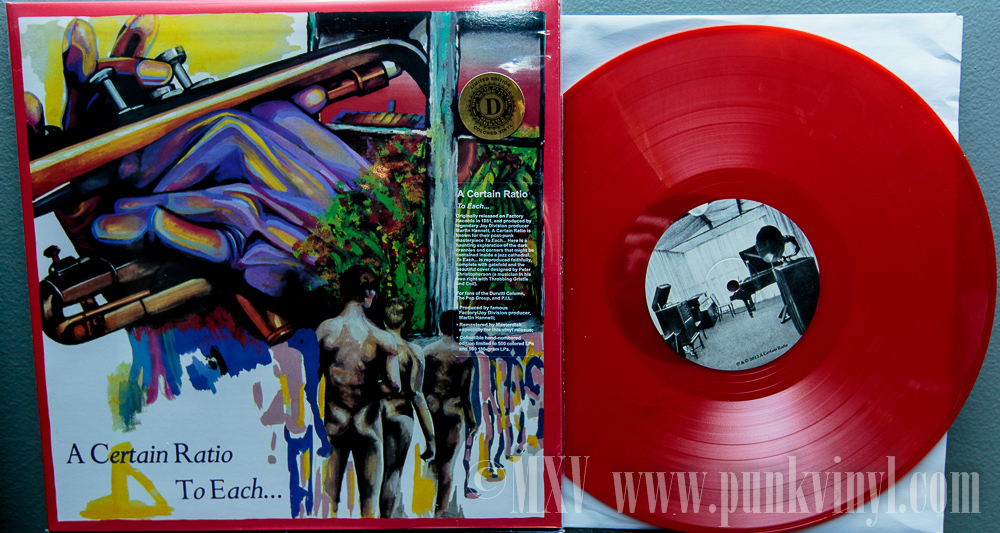 A Certain Ratio – To Each… vinyl reissue

A Certain Ratio first formed in Manchester, England in the late 1970s. They started as more of a punk band but quickly evolved into a post-punk band and then continued to experiment with their sound by incorporating other sounds. By the time they released this, their debut album, they were blending post-punk ala Joy Division with funk, dance, jazz and a little dark wave. The result was a very interesting and diverse album that fit in with the post-punk/dark wave scene while standing out for its wider range of musical ingredients. They just don’t make music like this anymore as there were no rules back then and bands were far more experimental than they are these days and music was far less disposable. This album was released way back in 1981 on Factory Records, a label that had an incredible track record for releasing great and influential records and a label that ceased operations a very long time ago rendering most of their back catalog out of print. Some other labels came in and licensed and reissued much of the label catalog but a lot of it was short-lived and rarely was any of it on vinyl. In fact this was reissued only once in 2004 and that came and went in a blink of an eye and it was nowhere near as nice as what we have here.

The kings of quality vinyl reissues, Drastic Plastic Records, took the job of bringing this album back to the world on its intended format and as always they cut no corners. The album preserves the original full color artwork in a glossy gatefold sleeve. It comes in a resealable bag with a hype sticker on the front and a gold sticker on it indicating which configuration it is: black 180gm or opaque red colored vinyl. I prefer the colored vinyl version because it was never originally issued on colored vinyl and the red color compliments the album art. Whichever one you pick comes in a poly lined paper sleeve to minimize scuffing when handling the record and each version is hand numbered out of a mere 500 copies each. The record was mastered at Masterdisk who are veterans in the vinyl mastering game and they did an amazing job. The record sounds so full and balance and there is absolutely zero surface noise. The thing sounds amazing and easily rivals any version that preceded it. It is reference quality to say the least.

This should be available at most good record stores but if you are lacking one in your area you can get yourself one directly from the label at http://www.drasticplasticrecords.com. It is well worth picking up and they deserve the support for making such great quality vinyl reissues.