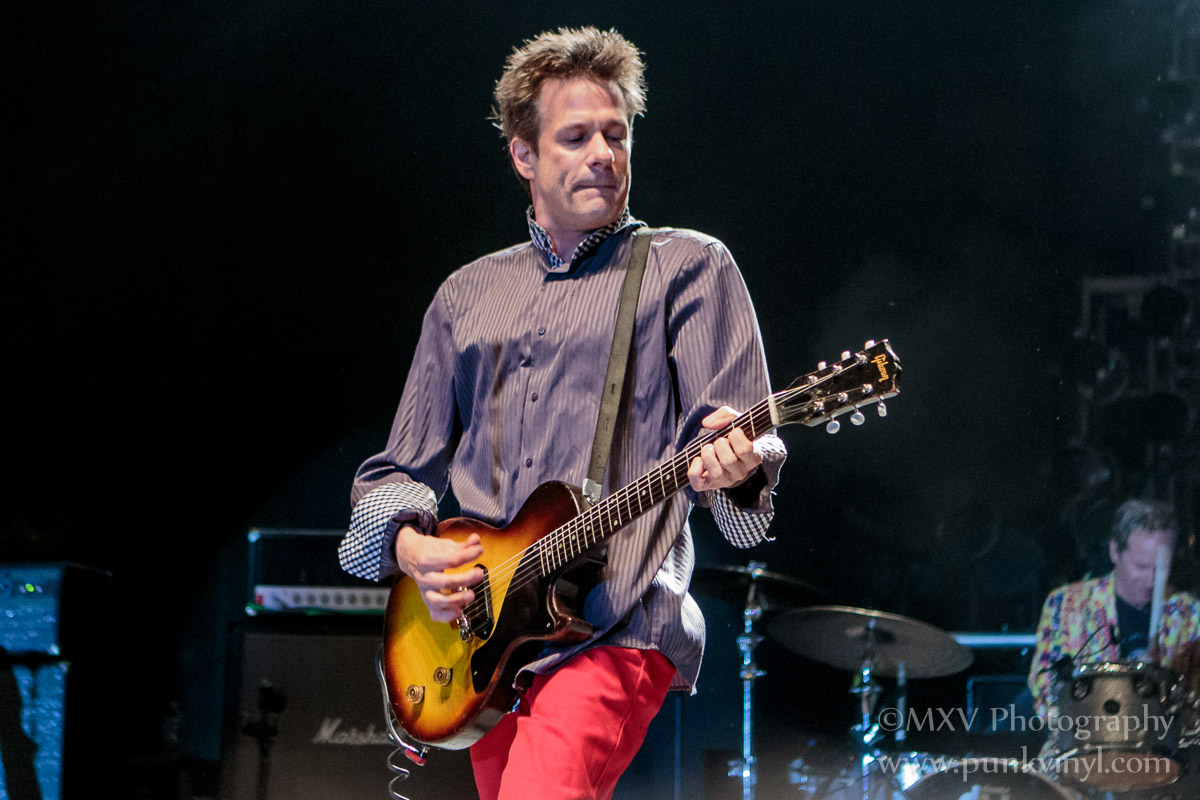 The third and final day of Riot Fest 2013 didn’t get off to the best start because Mother Nature decided to try her best to ruin the day by having it rain. It rained off and on for nearly the entire day but as the saying goes, “the show must go on” and go on it did, right on schedule. The park quickly became a wet and often muddy mess but the stages were covered so at least the bands could stay dry while they played. The crowd was obviously smaller than the previous days but the park was still very crowded full of people sporting rain ponchos and umbrellas. The smarter ones were even wearing rain boots. People seemed to take the bad weather in stride and scanning the crowd there was no evidence that people were letting it get them down or take away from the enjoyment of the fine selection of bands on the last day of this year’s fest.

Against Me! had the good luck of having the rain stop for their set. The people who stood in that muddy section of the park were treated to an energetic set of melodic punk songs. The band was tight and gave it their all while the crowd sang along to their more popular numbers and danced around the wet park. They played about 40 minutes and there wasn’t a dull moment in the entire set.

The rain picked back up big time when Bob Mould took the stage but no one noticed as they were too busy watching him steal the show. He and his band played some songs from his most recent album and some other stuff from his vast catalog but the real highlight came near the end of the set when he played a trio of Husker Du songs back to back! He played “Something I Learned Today,” “Chartered Trips,” and “Flip Your Wig”. All three sounded incredible and those three songs alone made standing out in the rain totally worth it. Bob’s set was flawless from start to finish and he and his band seemed really into their performance and it made the songs sound even better. Not only was his set the highlight of the day, but it was one of the best performances of the year in the city of Chicago.

The Dismemberment Plan also played in the pouring rain that looked like it would never stop. They played really quirky and unique indie rock that defies description. Sometimes they were subdued, sometimes they were danceable and used electronics and sometimes they were more rocking. They had a decent sized crowd watching them but just as many people seemed baffled by them as there were fans.

The reunited Rocket from the Crypt proved that 20 years later they are still the excellent showmen that they were back when they were a full-time band. They all wore matching outfits (they ditched the sparkly gear of yesteryear for something even more retro that looked like they could be either lounge singers or a bowling team) and they played a fine selection of their “hits” along with other material. No matter what they were playing, they sounded like they never stopped playing and they were just as much fun in 2013 as they were in 1993. They were another highlight of the day.

The rain finally started letting up by the time Suicidal Tendencies took the stage. The Suicidal Tendencies that took the stage was far different from the one that put out that legendary self-titled album 30 years ago as singer Mike Muir has been the only original member for 2/3 of the band’s lifespan. Mike was noticeably older and heavier and the rest of the band was a lot younger than he was. The drummer was also humongous but he played with amazing speed and precision. The band had a ton of energy when they played and none of them held still for more than a few seconds at a time. While they had a ton of energy the older songs were hard to make out in the mess of speed metal/funk that the band plays these days and sometimes you didn’t know that you were even hearing a song from the first album until you heard a familiar chorus. They played their mega-hit, “Institutionalized” and didn’t do it any justice but that didn’t stop the younger fans in the audience from going completely crazy during most of their set, and especially that song. They get points for the high energy factor and enthusiasm but the metal/funk thing they have going on grew stale quickly and while the whole gangster image has been their gimmick for 30 years it just seems kind of corny 30 years later.

AFI drew the youngest crowd of the day and the rain finally stopped at that point so the park suddenly grew more crowded as more and more people started showing up late, having waited out the rain. Even before the band took the stage the massive crowd started chanting for them and when they took the stage there were tons of screams and a giant pit going. They play a sort of gothic emo rock with only a few traces left of punk rock but the combination works well for them and they were really on their game for this performance. Singer Davey Havoc was in constant motion as he belted out lyrics and sang and screamed and the crowd sang along with every chorus.

The Pixies, who now feature a younger, hotter Kim on bass (Kim Deal recently left the band and was replaced by a new Kim) were the second to last act of the show and they had a lot of excitement surrounding them as they have legions of fans of all ages. They hid behind either near total darkness or blinding back lighting and smoke and played a mix of new material and old favorites. The audience was pretty captivated behind their performance which was very clinical but pretty spot-on. There wasn’t much in the way of talking or fun, it was just song after song of playing.

There was a huge buzz about the final band of Riot Fest 2013 and that was the reuniting of The Replacements. The band actually played their last show ever at an outdoor show in Chicago so it seemed fitting that they play one of their first shows in 20 years in the same city they broke up in. This version of the band featured two original members and two new members. The other two original members were unavailable due to one having passed away and one having health problems. Nearly ever person still in the park (and there were tens of thousands of them) gathered around the stage and the anticipation was so thick you could cut it with a knife. When the lights came on, the band came out with all guns blazing and were firing on all cylinders. They went from zero to sixty in the span of two notes and the crowd got caught up in it and went nuts (but in a much more adult fashion as a huge majority of the crowd was of the older generation that grew up with the band).

They opened with “Takin’ a Ride” which was amazingly tight but the band was just loose enough and slightly sloppy enough to make it feel authentic. It was a controlled bit of recklessness that hearkened back to their younger years but presented in a more professional and reliable manner. The song sounded amazing and it was clear these guys took this reunion seriously and cared about putting on a good show.  There was a lot of songs from their Twin/Tone years (ie: their best stuff) and they even threw in a cover of “Borstal Breakout” by Sham 69 for good measure. They were non-stop energy and non-stop fun and they delivered a performance that more than lived up to the months of anticipation and hype that surrounded it. They deserved to close the festival as the top act and that’s just what they did. They made this year’s Riot Fest end on an incredibly high and very special note and as the crowd left the festival grounds for the last time this year there was nothing but happy faces and soaked shoes and clothes as far as the eye could see which is a damn good way to end three days of great music and fun.

Riot Fest 2013 showed the world that it is now the premier summer festival. It is truly the only one that has something for everyone and it is presented for a much more affordable price than the other festivals that pass through town each year. The festival organizers really set the bar even higher this year than they did last year and it will be interesting to see how they plan to try to top it again next summer.