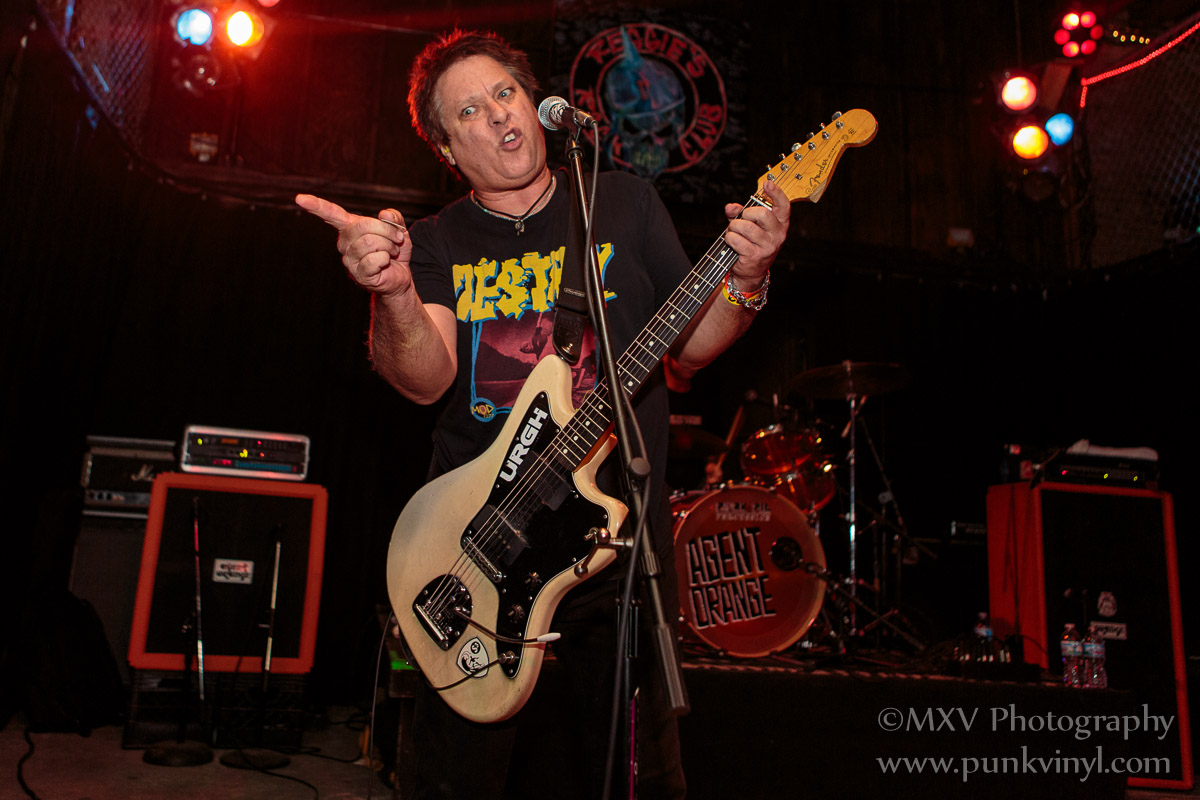 Agent Orange and The Bollweevils 10/11 at Reggie’s

Saturday night was a perfect night for a punk rock show and in the South Loop area of Chicago there was no better place to find such a show than Reggie’s. Punk legends Agent Orange played a show along with longtime Chicago punks, The Bollweevils. That alone was more than reason enough to come out but for those slightly younger punks, Guttermouth also shared the stage with those bands as well.

The Bollweevils played first which seemed like a crime, especially considering they were way better than the band that played after them but at least it meant that the show got started on the best foot possible. They once again put on an extremely energetic and entertaining performance that featured many old staples along with some great new material they’ve written recently. The band talked a bit between songs and everyone had a lot of fun during their set. During one song, Daryl came out into the crowd to sing along which inspired the entire middle section of the audience to start a giant mosh pit that ended up lasting for most of the rest of their set.

Pinata Protest were next. This was an odd band that sounded like a punk rock mariachi band. Imagine a band like the Dropkick Murphys being played back with a SAP (Second Audio Program) in a mash-up with a mariachi band who also happened to like Rancid and you can get an idea of what they sounded like. It didn’t work at first but the second half of their set was a little more entertaining and faster paced. One of their biggest faults was the use of pretty much the same accordion sound in every song which made it sound like they just kept playing the same song over and over again. They really should have gone on first as The Bollweevils was the far better band.

Agent Orange took the stage to a very crowded club at this point and they proceeded to tear the roof of the place with a top-notch performance. They played pretty much their entire first album plus stuff from the later records including current songs they just released less than two years ago. The crowd went nuts for all the classics and they went slightly less nuts during the newer songs (all of which were quite pleasing to the ears). Band leader and sole original member, Mike Palm, was in great spirits and his band played those classic songs pretty much flawlessly. They played a long set that easily lasted an hour and had more songs than you could count but it seemed to fly by in the blink of an eye because it was so good. Whoever said punk rock was a young man’s game is an idiot because over 30 years later Agent Orange still play with the amount of energy they did back when they were young. This band really should have been the headliner instead of Guttermouth and as far as this writer is concerned they were!