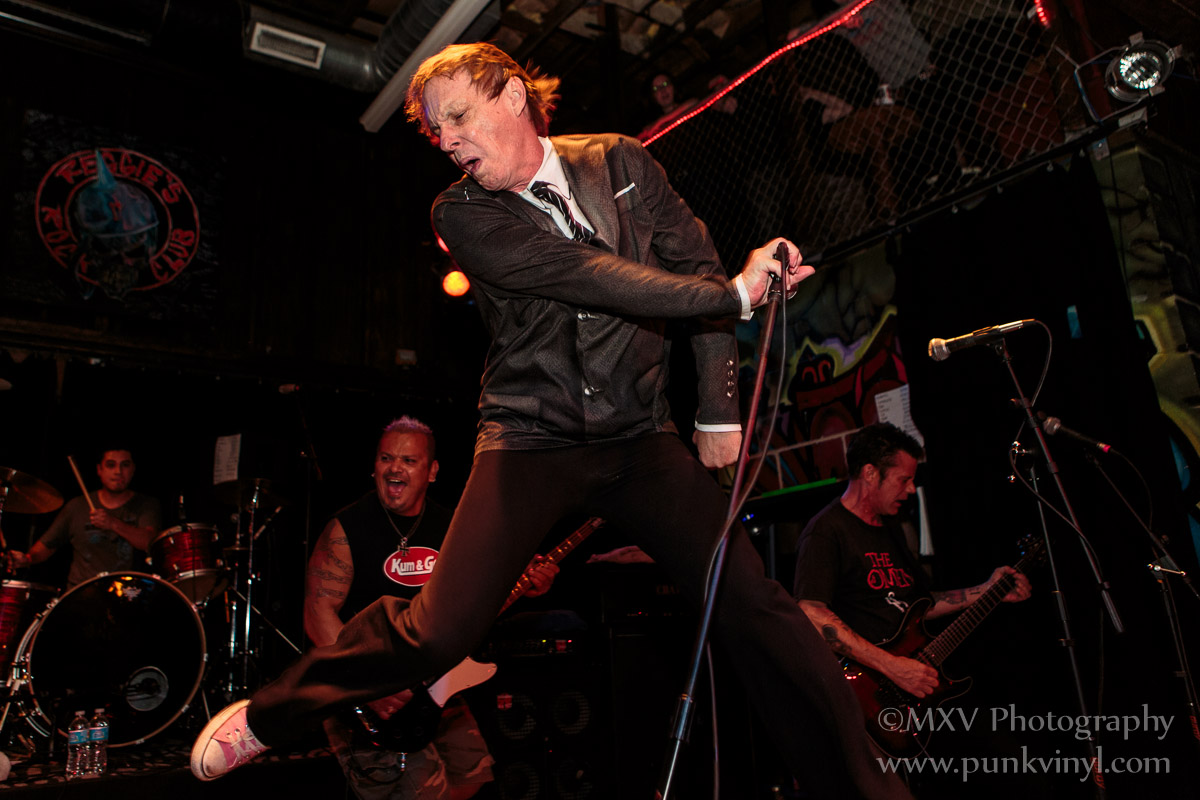 Saturday  night brought the return of punk forefathers, The Dickies. These pioneers of American punk rock have been around for over 33 years now and are still at it with founding members Stan Lee and Leonard Graves keeping the band going all this time. They headlined a five band bill that featured some really good bands.

First up was Moist Guitars. This quirky band is no stranger to the Reggie’s stage and have played there in the past. They feature a flamboyant, super-sized lead singer who comes off a bit like a chubby Gibby Haynes. They had some really catchy and diverse punk songs that at times were pretty out there ala the Butthole Surfers. No two songs sounded the  same but most of them sounded good and the crowd really enjoyed them. During the last song the lead singer stripped down to his underwear and danced around the stage which coupled with the makeup he had on was a bit of a scary sight.

Brain Vacation was next. They too had an overweight lead singer who felt compelled to take his shirt off mid-set. They were pretty standard hardcore by the numbers and didn’t make a memorable impression. The riffs were OK but nothing about the band stood out at all.

Hotlips Messiah played third. They had a couple of new songs along with many of the staples of their live show. Traci Trouble once again showed why she is such a great front woman as she sang and bounced around the stage while the band put on a really fun set that was high on the energy. How these guys aren’t one of the biggest bands around the city by now is one of life’s great mysteries but if you haven’t seen them play you are missing out big time. They should have gone on right before the Dickies as they were the best band of the four openers by a huge margin.

The Modern Day Rippers are a high energy punk rock and roll band with a meaty sound and a fast tempo. These guys are extremely entertaining and energetic and always put on a good set. This was the first show they’ve played with their new drummer and he was a solid fit in this tight outfit. This is another band that is well worth seeking out and one that should be playing more of these higher profile gigs.

The crowd was really excited for The Dickies to take the stage and the club filled up nicely by the time they walked out to start their set. They opened with “Killer Clowns” which generated a lot of smiles from the audience.  When they started playing songs from their earlier records the crowd went nuts. The band put on a “greatest hits” set that had pretty much every song any Dickies fan would want to hear from those classic early records.  Such Dickies classics like “Fan Mail,” “Manny, Moe, and Jack,” “Nights in White Satin,” Paranoid,” and more sounded as great that night as they did when they originally wrote and recorded them. Leonard has his usual props for songs like “If Stuart Could Talk” and “Doggie Do” and every song sounded great. They were so spot-on and so much fun that the entire crowd seemed to get wrapped up in the dancing and bouncing around and singing along. The band even did two encores that included “Gigantor” and “Banana Splits”! Every popular Dickies tune was well represented and the hour they played seemed to fly by in what felt like only a few minutes. When the band finished and left the stage they left a lot of sweaty, drunk, and very happy people in their wake and showed the city of Chicago that they are still one of the best bands in all of punk rock.