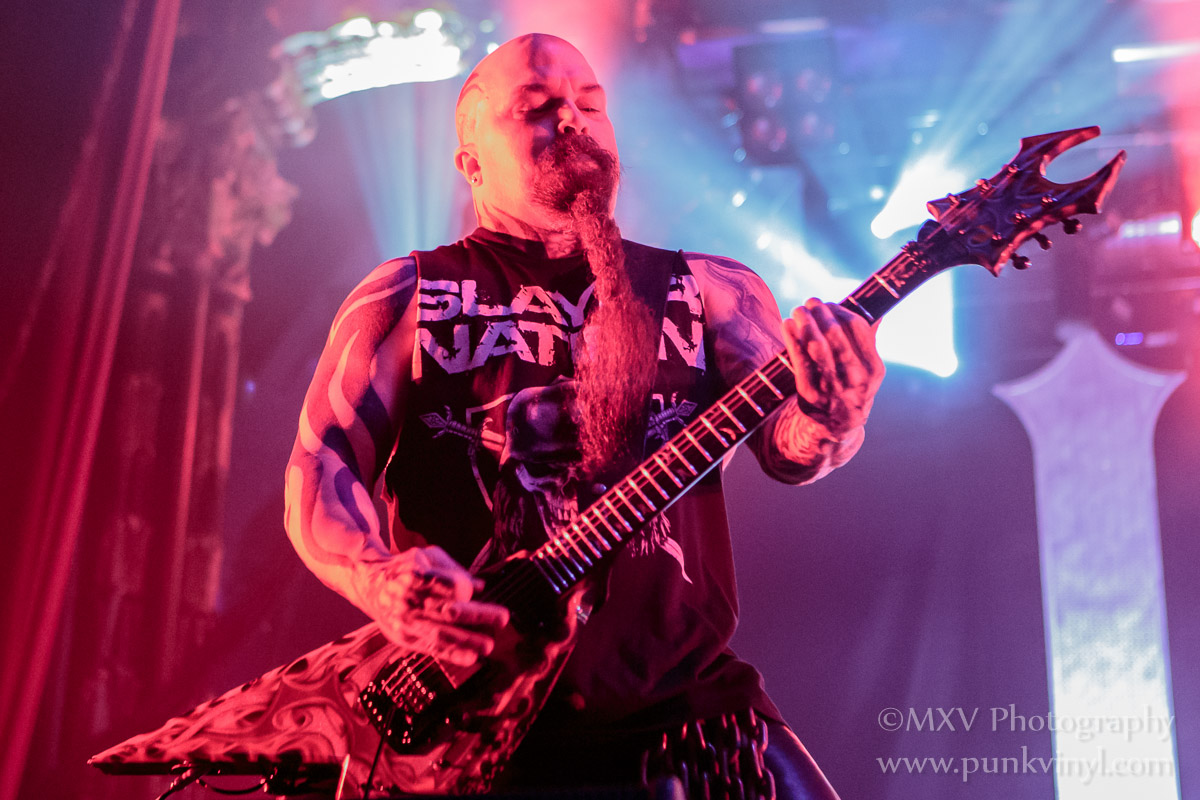 The Aragon Ballroom has a fairly long history of hosting big metal shows and they kept the tradition up Friday night when they were the host for the return of Slayer! These metal legends hit the road after a very tough year and they brought a couple of bands with them to round out a full night of heavy music.

Hailing from Australia, 4Arm started the evening off as legions of heavy metal fans were still making their way into the venue. They played a brief but competent thrash metal set. They had all the necessary ingredients for a good thrash band even if they weren’t overly original. Their half hour set flew by and the crowd seemed to enjoy what they were playing.

The next band on the bill was French imports, Gojira. The crowd had grown considerably by the time they started and they had a lot of fans in the audience. They played a sort of technical metal/death metal hybrid that was similar in presentation to Meshuggah. They had really thick, churning riffs with some mechanized sounding repetition and growled and yelled vocals. They were heavy as can be and the drumming was insanely speedy. Their more modern sound was a big contrast to the other two bands on the bill but that kind of variety made for a better overall evening.

It has been a rough year for Slayer; first they parted ways once again with their original drummer, Dave Lombardo and more recently they lost a brother when founding member/guitarist, Jeff Hanneman, passed away. Jeff’s recent health problems had kept him from touring with the band recently but his passing was still unexpected and a great loss. The band decided to soldier on, at least for the time being, and pay tribute to Jeff by doing what they all did best, play their legendary music for their fans and they did it in a very cool way.

For this tour, the band is doing an “old school” set. Their set contains songs from their debut up through the Seasons of the Abyss album which translates into every Slayer fan’s favorite material. This set was literally “Slayer’s greatest hits”. There was no filler, no new material (though the band has never put out a bad record, let’s face it, the fans prefer the classic material) and nothing but greatness from start to finish. They picked most of their best stuff and they assembled it into a well-placed set that could go down as one of the greatest Slayer set lists in their 30 year history.

The spine tingling and familiar intro to “Hell Awaits” started playing and the crowd roared with applause as the curtain dropped and those classic riffs began. This was as strong of an opener as any Slayer fan could have hoped for and it only got better from there! They busted out such old gems such as “Necrophiliac,” “Captor of Sin,” and “Black Magic” among the many old staples of their usual set list. A real highlight came in the form of them grouping a bunch of greats from Reign in Blood all together in the middle of the set “Post Mortem”, “Altar of Sacrifice” and “Jesus Saves” all played together had heads banging so hard that many likely suffered whiplash and bodies were moving everywhere in the packed Aragon “Brawl Room”.

When the band completed their main set, they came back for a two song encore that was a double shot of perfection that left the crowd on a huge high and that was “South of Heaven” followed by ‘Angel of Death” which ended the evening on an incredible rush after 90 minutes of some of the greatest heavy metal music the 20th century ever produced. Slayer gave the fans an amazing tribute to their fallen brother and the fans gave back in the form of their undying appreciation, sweat, and probably a little blood. It was a great night of heavy metal and a great night to be a Slayer fan in the windy city.