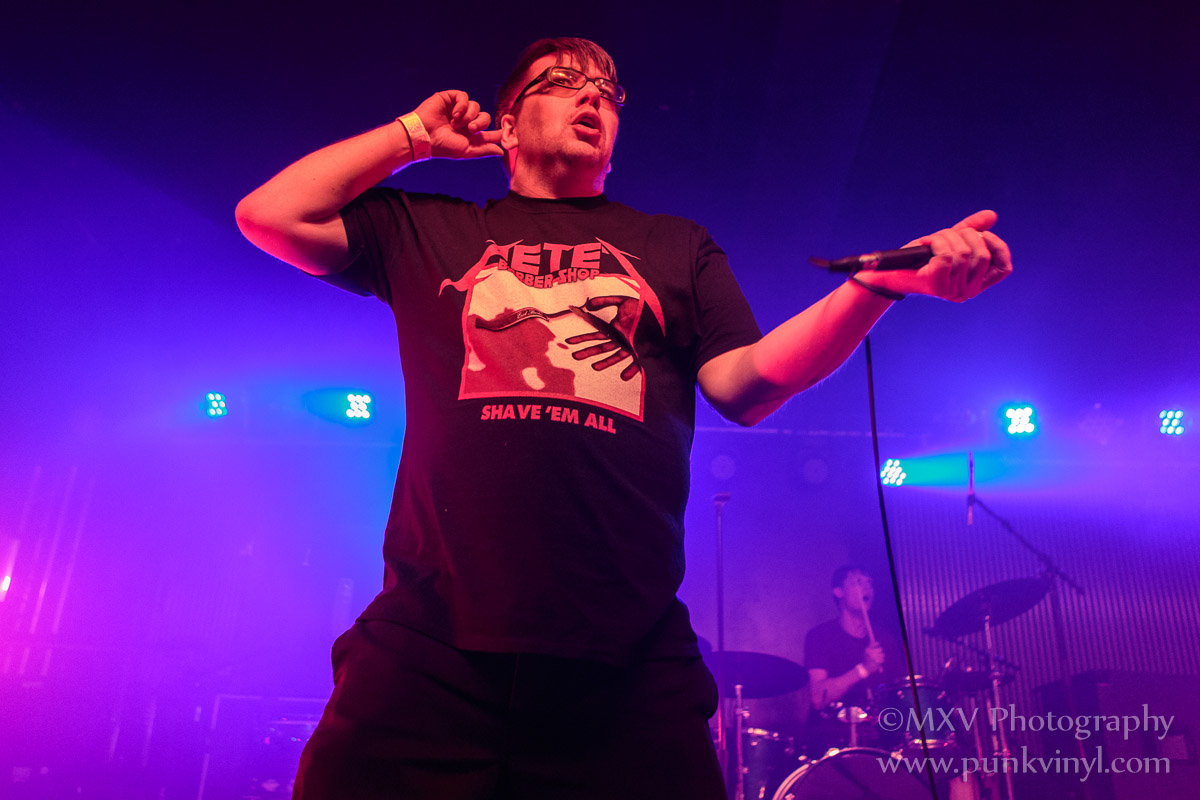 Christmas came a few days early for punk rock fans in Chicago as three local greats teamed up for the evening at the new Concord Music Hall. The three bands were 88 Finger Louie reuniting with all the original members to celebrate their 20th anniversary, The Bollweevils , and The Bomb. You couldn’t ask for a better lineup with absolutely no filler! The club filled up fast and for those of you who haven’t been to the Concord Music Hall yet it is a very  nice, very clean venue that is likely to become one of the top concert halls in the city.

The Bomb got the night started on the right foot. The band features Jeff Pezzati of Naked Raygun on vocals and Jeff Dean of about a hundred local bands on guitar. It’s hard not to compare the band to Naked Raygun considering they too play melodic punk rock with really loud guitars. The Bomb have a lot less “whoa ohh ohh’s” in their songs but it is safe to say if you are a Naked Raygun fan you’ll likely find a lot to like in The Bomb. These guys were spot-on and delivered a memorable performance.

Few bands can break up for any length of time and then reunite and become better than ever. The Bollweevils have done exactly that. Ever since they got back together they’ve been on fire and acquiring a new bass player seemed to give the band a renewed sense of vigor. This show was the largest one they’ve played in the past couple of years and the larger crowd and larger stage seemed to give them another shot in the arm because they delivered the goods ten-fold. They played a set very similar to recent shows which meant a ton of their crowd favorites along with their two new songs. The new songs need to come out on a 7″ single immediately because the songs are as good as anything they did in the past. The crowd loved every minute of their set and their set was 100 percent fun. They are still one of the best bands in the city and every time they play a show it is a real treat for fans of all ages.

88 Fingers Louie hasn’t been an active band in quite some time. They did a couple of reunion shows at Riot Fest a few years back but it wasn’t the original band so many long time fans were left hoping that someday they’d reunite once again with the full original lineup. Those people got their wish last night because the original lineup reunited for one show only and boy did they give the fans one hell of a Christmas present in an amazing performance. They not only played a ton of songs spanning their career but they tagged in and out drummers from the past. They had three different drummers, all who played with the band at some point, take turns handling their former duties while the band drove the crowd crazy with one great song after another. The crowd went nuts dancing, climbing all over each other and singing along and the band just kept going until they had nothing left to give. When the smoke cleared they had played about 90 minutes which included an encore and the fans still wanted more. There was an electric feeling going through the room during their set where even if you weren’t a hardcore 88 Fingers Louie fan you could tell that something special was happening on that stage and it was impossible not to get sucked into enjoying the ride.

Last night’s show was an amazing way to ring in the holidays and help bring a close to 2013. It was a show so good and an event so special that it really was a holiday gift for the Chicago punk scene and will be a show people will talk about for years to come.