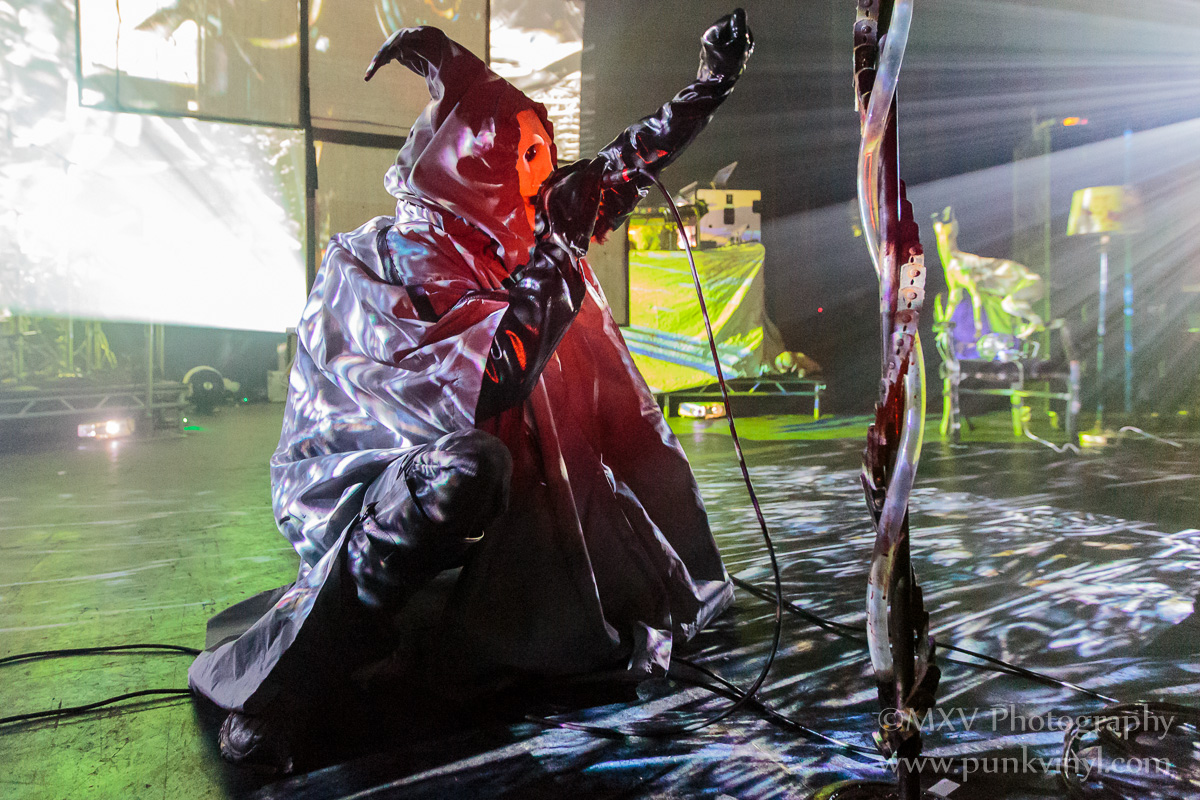 Time sure flies and it’s scary to think that Skinny Puppy recently passed their 30th birthday. Granted for close to ten of those 30 years the band had been broken up but it is still one hell of an impressive length of time to be a band, especially when you look back at their amazing discography. They are a rare breed that not only was able to take time away and then reform, but they were able to maintain the high standard they set for themselves and haven’t tainted their legacy whatsoever. They still keep changing it up and making albums that sound unique from each other. One thing they do a lot less in their older age is tour, so when they finally hit the road after a few years away from touring, it was something special that they were playing here in Chicago Friday night and as a result they sold out The Vic theater. The place was filled with excited fans spanning multiple generations.

There was one opening band this evening and it was Army of the Universe. About the only interesting thing about them was the green laser lights emitting from a keytar that one of the band members used part of the time. Aside from that they were a rather generic and formulaic electronic rock band that didn’t have anything to make them stand out whatsoever. The vocal delivery sometimes sounded like a glam rock band and were rather uninspired and the music was pretty cookie cutter. They played about 45 minutes which was probably 15 more than they should have.

After some time setting up some additional parts of the stage set, Skinny Puppy took the stage to a huge roar from the audience. (SPOILER ALERT: If you don’t want to know what the set list was then stop reading now and just look at the photos) Cevin Key took his usual spot at the right side of the stage on his tower of keyboards and various music altering devices and Justin sat at the drums on the left. The stage set featured a huge video screen that took up the width of the stage, two microphone stands at different sections of the stage and a large box in the middle of the screen. A person in a hazmat suit came out and took some readings from the different parts of the stage as the song, “illisiT” started. Ogre came out covered in anti-radiation clothing like huge rubber gloves and a plastic poncho and had a mask on. He also was twirling around a huge umbrella with a radiation symbol on it. He looked like he was waiting for a nuclear storm to hit and that he’d be the only one to survive it with that protective gear he had on.

As the band immediately went into the next song, “Village” the box in the center of the screen was opened up to reveal an oddly shaped second video screen. This screen was showing different visuals than the huge one behind it and the way the two played off each other and at times seemed to blend together into separate but complimenting video images looked really cool, especially from a distance where it was easier to soak up the entire visual of the stage. The band sounded as good as they’ve ever sounded and in fact this was easily Ogre’s most rock-solid vocal delivery of any show/tour they’ve done since reforming the band. It was so spot-on that if you were just listening to the audio and not even looking at the stage, you’d have been blown away by just how great the music sounded. Ogre really went the extra mile with his vocal performance. Between certain songs, he would change costumes or bring out various props to interact with.

The show had a much different feel than shows in the recent past both in its presentation and with the set list. Presentation wise there was a distinct lack of blood. The one thing that was always synonymous with a Skinny Puppy show was almost completely absent. There was only one spot where any blood was used and that was during “Worlock” where Ogre had a large knife prop he used to cut his arm and draw blood. This time the stage visuals were largely tied to the video screens and some odd colored liquid in clear beakers and a light up box. From what one could make out, the costumes looked very cool and elaborate but it was hard to make out any details about them even up close due to the lack of stage lighting.

There was very little light on the stage, most of the light on stage came from the video screens and they had a couple of laser light gimmicks that flashed on the stage but overall it was very hard to see any details of Ogre’s various costumes and facial expressions because they pretty much kept all the stage lighting completely off. This was the only flaw of the performance, that all this time and effort was spent on these various costumes for Ogre to wear and that you couldn’t fully appreciate it because you couldn’t see most of it. While stage lighting would have detracted from the video screens, which played a major role in their visual presentation, a happier middle ground would have made an even bigger visual impact.

The set list for this tour was also very different from most tours and especially any tours they’ve done since reuniting. As expected the set was very heavy on songs from the new album, Weapon. These songs sounded even better live than they did on the album and really did the album justice as it likely led many to appreciate the new material even more after hearing those songs live. They did sprinkle some older material in there  and they had some good choices that one would likely not expect. There was nothing from Too Dark Park, Last Rights, Vivisect VI, The Process, and The Greater Wrong of the Right. They did end up playing four out of the six songs from their very first release, Remission, which makes a lot of sense given the similarity that Weapon has to it in its sound and the method in which those two records were written, not to mention one song from Remission was redone on Weapon.

Songs from the past they did include this time in their main set were “The Choke”, “Solvent” (which was the one they redid on Weapon), “Hexonxonx”, “Worlock”, “First Aid”, and “Deep Down Trauma Hounds”. Everything else was from Weapon and Handover. In a real treat they played “Pasturn” from the Mythmaker album which is easily the best song on that album and one they had never played before! The band did two encores, the first was Remission heavy with “Far Too Frail”, “Glass Houses” and “Smothered Hope” (which sounded better than it has in years!) along with “Overdose” from Weapon. The band then came out for a second encore and played “Assimilate” which ended the evening with a real bang. The band played a little over 90 minutes when all was said and done and it was truly an amazing performance, one of their best in years.

30 years is a long time to be a band and a long time to keep people’s interest. Skinny Puppy showed a packed house on Friday night that they are still totally relevant and by changing things up the way they did they showed they are also still full of surprises and aren’t content to just stick to the staples of their past that worked so well for them. It is only February and the best show of the year just happened. Good luck trying to top this one, every other band on the planet.