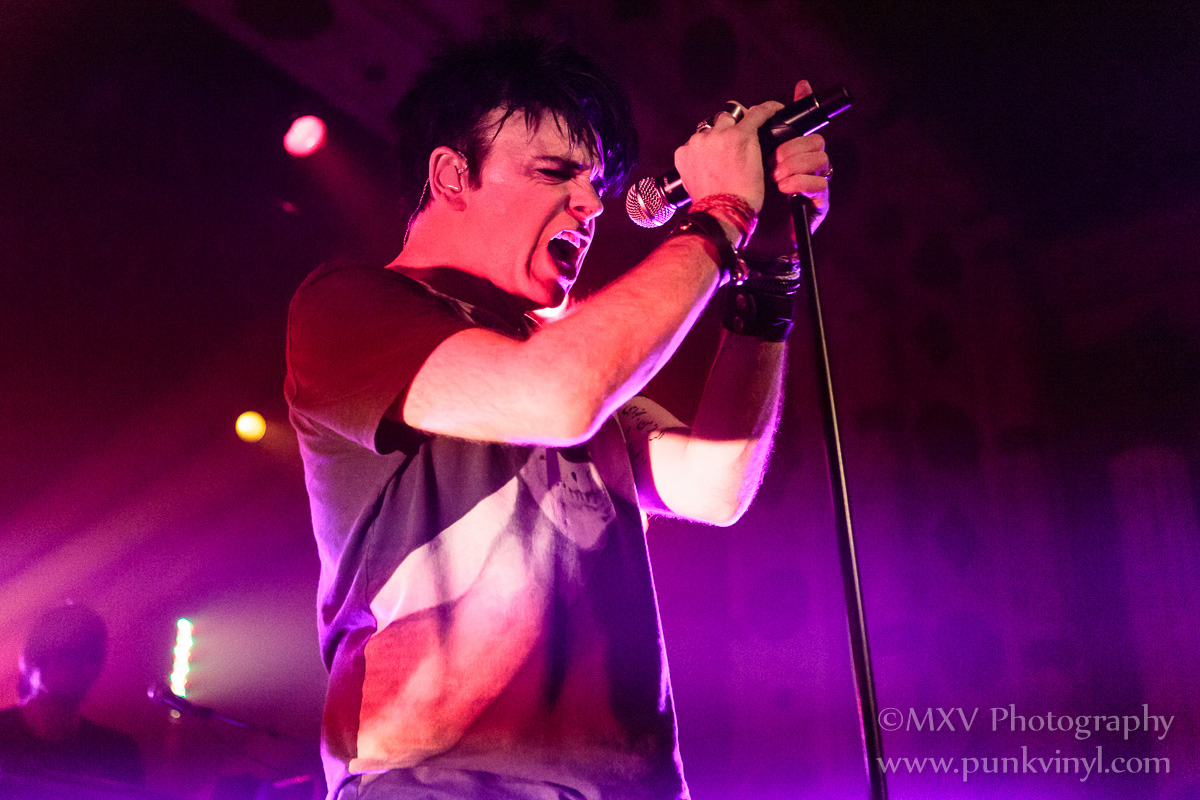 The Metro was nearly at capacity Saturday night as electronic music fans turned out in droves for a somewhat rare chance to see Gary Numan perform. Numan doesn’t tour that often so when he does it is a real treat to see him perform and the man has a musical career spanning well over 30 years. He is touring in support of his latest album,Splinter, which also happens to be some of the best work of his career.

Roman Remains started off the evening. This three-piece band featured a drummer, guitar player and a female vocalist. They sounded like a more electronic driven Miranda Sex Garden. The lady had a pretty strong vocal delivery and if their set suffered anything it was that there was a lot of similarity in the songs they performed so it came across a little dull after a while despite the shortness of their set.

Next up was Big Black Delta. This band was a two-piece consisting of a singer/keyboardist/laptop along with a drummer. They had cool flashing lights and video images behind them and they played electronic driven dance music. The singer had a really good voice and their songs were melodic and catchy and there was a fair amount of variety in their set which made a very interesting and infectious listen from start to finish and the won over quite a good portion of the audience with their solid performance. When he wasn’t tending to some electronic gadgetry, the singer dance around the stage quite a bit.

The lights dimmed and the crowd got excited as Gary Numan came out with a guitar strapped to him and was joined by a full backing band, including a bass player that was about ten feet tall. The instrumental, “Resurrection” opened the set and it was accompanied by loud guitars and a heavy low-end that really packed a punch but also sounded very crisp. From the opening song the sound for Gary’s entire set was really well mixed, loud, and sounded perfect.  He followed it up quickly (after  freeing himself of his guitar) with “I Am Dust” which is the opening song from his newest album,Splinter. It sounded spot-on and his voice sounded as great as ever. The lights flashed and strobed and Gary paced around the stage a bit as he delivered the goods during this song. He has a way of crafting songs with hard guitars, punchy electronics and a melodic vocal delivery that is unparalleled and at age 56, the man not only doesn’t look his age but he also puts on a performance that rivals younger musicians.

Gary dipped back to the album that made him famous ,1979’s The Pleasure Principle to bust out one of the best songs from it, “Metal”. It was one of the many highlights of his 90 minute set which heavily showcased the Splinter album (which is an album that is damn near perfect from start to finish) along with some of his more recent material. He also proved that he isn’t a nostalgia act by including his most popular song, “Cars” in the middle of his set instead of saving it for the encore like most acts would. That song, while a highlight for many, was simply one of the many excellent songs he performed that evening.

Typically when you see a band in a live setting, you will reflect back on the set list and make a mental note of the songs you’d happily trade in for another if the decision was up to you. This wasn’t the case for Gary Numan’s show his evening. He played much of the best material from his recent output, along with the three best songs from his début album, and much of the new album which as mentioned is easily some of his best work ever. Gary didn’t spend any time talking between songs or even stopping for more than a few swigs of water, he instead spent 75 minutes just putting on a perfect performance of his best work, showing the 1000 people or so in attendance that when it comes to electronic rock music, he really is the man. He also came back out for a nice three song encore consisting of “I Die You Die, ” “Are Friends Electric” and then closing with the somber “My Last Day” which is the closing song on Splinter and a really good finisher. When Gary and his band exited the stage he thanked the audience and waved and left the entire crowd at the Metro completely satisfied and in awe of such an amazing performance. This was a show that people who attended it will be talking about for a long time to come and those that missed out should really be ashamed of themselves. Those of you in other cities on this tour dare not miss this show as it will be one of the more memorable shows of one’s life.