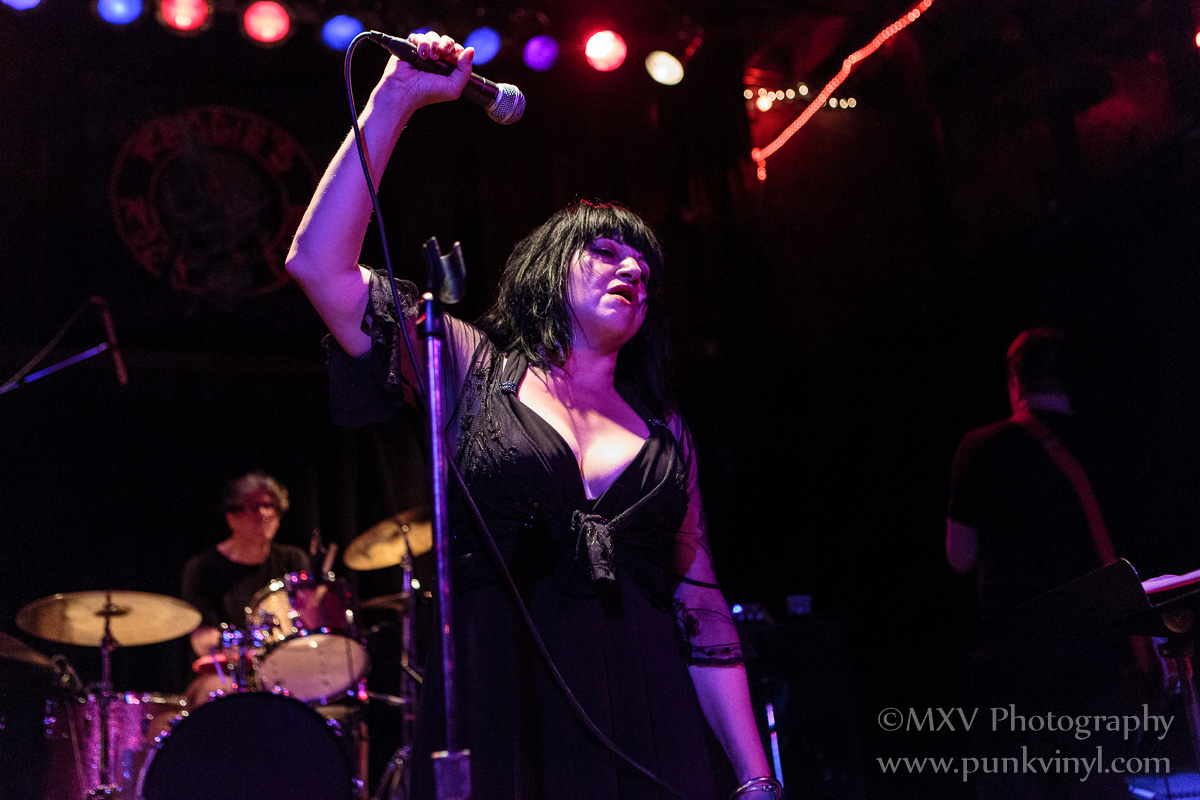 Thursday night the legendary, Lydia Lunch, graced Chicago with her presence when she put on a musical performance billed as Lydia Lunch Retro Virus. This special event took place at Reggies, which is one of the finest clubs of its size in the city and has been a home to a lot of older punk legends when they tour. She was joined by three opening acts.

First up was Nones, who are a band from Chicago. They consisted of a drummer, bass player (both females), and a guitarist/vocalist. They made a big loud sound with noisy guitars and heavy percussion. They sounded like a throwback to the early Amphetamine Reptile Records bands which is a really good thing if you like your rock to be fast and noisy and off-kilter. Their half hour set was rock solid.

Running was second and they too are from Chicago. These guys had fuzzed out, processed guitars that never stopped making a racket even between songs. Think of the shoegaze guitar sound like Medicine for a frame of reference. Their music was still on the fast side and they were really interesting. The guitarist and bass player took turns doing vocals depending on the song and their vocals were echoed and a bit distorted. If you mixed punk with shoegaze then Running is the result you’d get and it was a damn good one. Definitely worth checking out if you are into this sort of thing.

Toupee was third. They played late 70’s/early 80’s inspired post-punk with some odd tempo changes and occasionally would break into a faster, almost thrash like speed with growled vocals. The female lead singer had a lot of stage presence and talked a lot between songs. When she wasn’t also playing bass she’d writhe around the stage and chew up and spit out an apple. Some of the band members would switch instruments too based on the songs they were playing which was pretty neat. The singer had a good vocal range with a nice sound to her voice when she’d sing that sort of droning goth style vocal and then she could go up against any guy in the growling and yelling department too when they’d turn up the speed.

The crowd swelled in size and the club was pretty full by the time Lydia Lunch took the stage. Her Retro Virus band consisted of Weasel Walter, Bob Bert, and Tim Dahl. They opened with the Teenage Jesus and the Jerks song, “Red Alert” which is an instrumental and the only Teenage Jesus song she played. The idea of this tour was that she’d be playing selections from her musical career from the 1970s until the present and that’s exactly what she did.  Lydia may be well into her 50’s but she still has the spunk, fire, and wit that she’s been famous for and it was in prime form this evening. In between songs she spoke a lot and she wasn’t afraid to call out people in the crowd she found annoying, especially if they were yelling out song requests. The songs she did choose to play were great and the band with her sounded amazing. She did stuff from Queen of Siam, 13:13, Shotgun Wedding, and others and it really was a nice sampling of some of her strongest work from her decades of musical output.  It was very similar to the track list on her recently released Retro Virus live album. Her voice may be a little more raspy these days but her vocal delivery was strong and the combination of the musicians with her, plus her strong stage presence was great for any fan of her work.

They played well over an hour and every song sounded great. The crowd was pretty varied in age, gender, and sexuality and every single person in the audience that was disappointed with the show. Lydia Lunch has such a long and varied output that she could easily do this tour yearly and just change the set list every year and based on how good this show was, people will likely keep coming back for more. It was good to see this punk rock veteran up on a stage and still kicking some ass in her own special way.