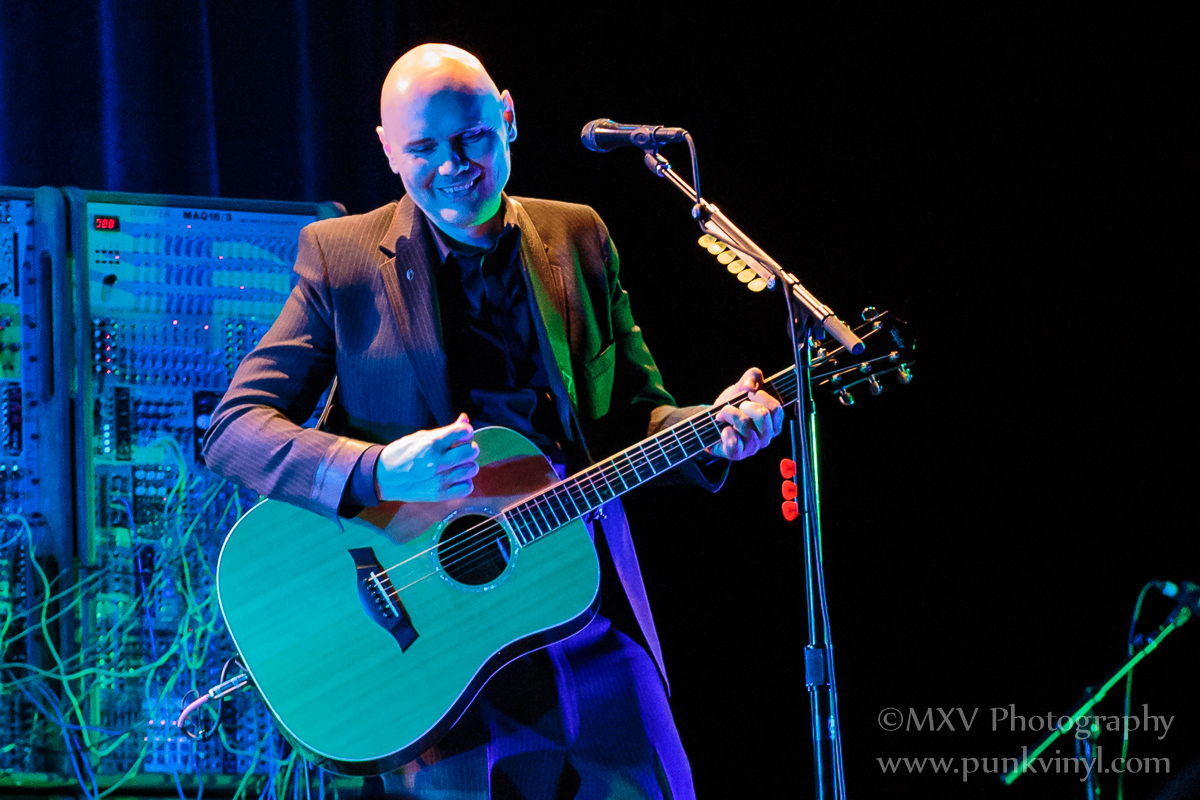 Billy Corgan has played a lot of the major venues both big and small over his lengthy and successful career. Whether it was in the Smashing Pumpkins, Zwan, or just playing solo, the man has done nearly all of it, except play the large and famous upscale venue called Ravinia which just so happens to be in the town he currently resides in.  It’s hard to fathom how he has never played there before given his enormous success in the music industry but he finally rectified that on Saturday night when he performed there as a solo act (with a little help from his friends) . It was a beautiful, warm evening and he packed the place full of music fans and people who just were looking for a romantic night out with a picnic and a bottle of wine while having a nice soundtrack for the evening. The fact that he was doing a mostly acoustic set seemed a perfect fit for the upscale location.

Fans who opted for the VIP ticket option were given a real treat in the form of an intimate, private performance in one of the venue’s dining rooms. Billy and Jeff Schroeder did a half-hour set and then followed it up with about another half hour of “Q & A” with the audience which was really interesting and the people who attended it were really excited to be given the opportunity to ask Billy pretty much anything they wanted, which included one fan asking Billy what the best Xmas present he ever received was.

Billy’s set was mainly acoustic and the set list covered a wide range of his musical output over the years with Smashing Pumpkins, Zwan, and his solo works. The lengthy and diverse set list really showcased just what a talented songwriter he is and so many of these songs sounded great in these acoustic renditions, which stripped away the wall of guitar and loud rock to reveal just how emotional some of his lyrics are which gave the songs a whole new dimension. One particular standout was an unreleased song, “Methuselah” which was about Billy’s father and written during the Mellon Collie and the Infinite Sadness sessions but was held back due to how personal the song was to Billy.

Billy played guitar and piano during parts of his set and he was joined by current Smashing Pumpkins guitarist, Jeff Schroeder, who played guitar, bass, and Mellotron during the set. The audience was mostly quiet during the songs but in between songs they regularly gave Billy a massive round of applause including at least one standing ovation which he seemed very touched by and very appreciative. Billy told some interesting stories between certain songs and had a good sense of humor too that kept the audience smiling and struck a nice balance between some of the emotionally touching songs.

Near the end of the set, he delved into a few louder numbers and brought out a live drummer and some back up singers where they turned up the rock a bit for a song or two. After over two and a half hours, it was time to close the show with one final song, “Of a Broken Heart” and for this one Billy introduced the staff and talent from his Resistance Pro Wrestling company and 30-plus people from the organization came out on stage (the wrestlers were even in full costume) and they all sang the chorus. It was a real feel-good moment and an amazing way to close out the show. The crowd gave another huge round of applause as Billy left the stage.

Billy Corgan gave Ravinia fans more than their money’s worth with his long and amazing performance, proving he is every bit as relevant and talented now as he was when his Smashing Pumpkins were leading the album sales charts. The man consistently writes great music and puts on great shows and this night at Ravinia was something really special that the audience will remember fondly for years to come.

Check out some additional photos from this event here!