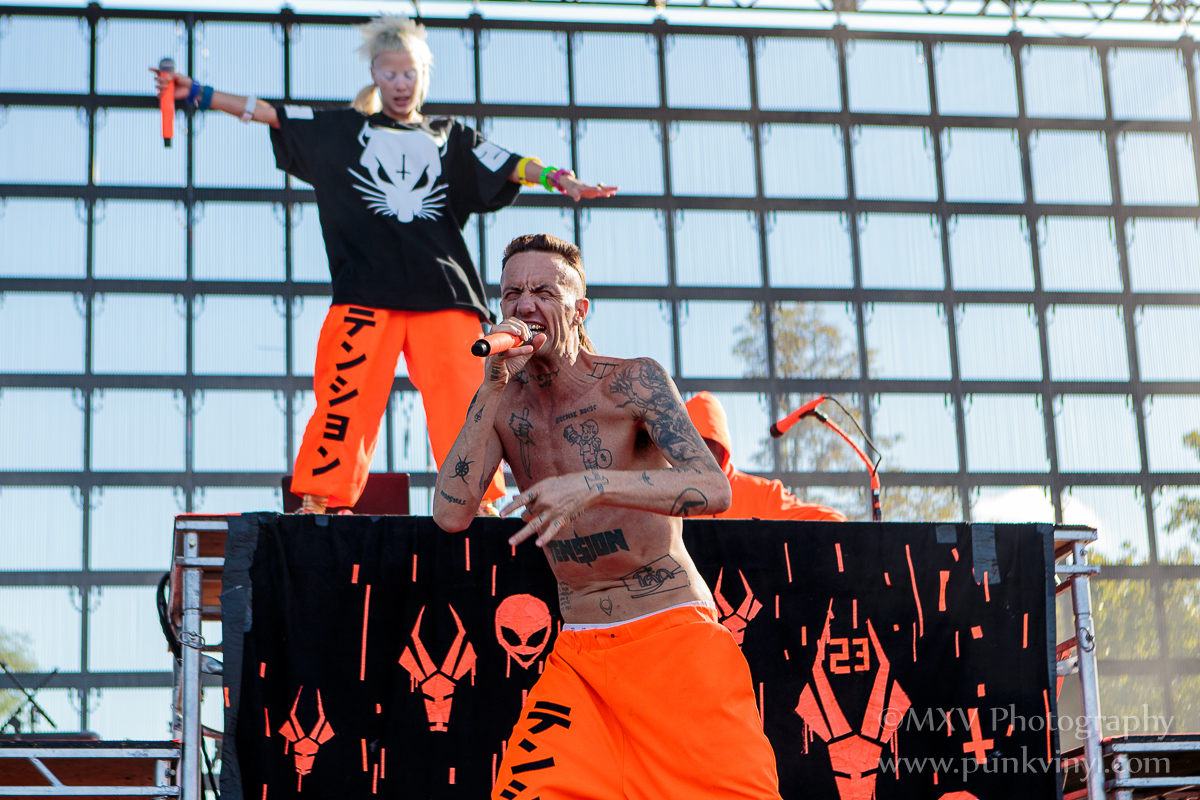 The second day of Riot Fest saw a major improvement in weather as it was both warmer and drier than the day before. It was a beautiful day for an outdoor festival and the only negative about the entire day was how the entire park was just one giant mud pit. Mud was stuck to everyone’s shoes and if one wasn’t careful they could sink into it in some of the really bad sections (the worst areas were barricaded off for people’s safety). No one seemed to care and most people dressed smart and wore the appropriate footwear and with the sun shining there was little for anyone to complain about as another amazing lineup of bands started the day off right around lunch time. The rides and the haunted house got a lot more attention on this day as well and seeing families with their children in tow near these attractions was a common sight.

7 Seconds could hold the title for the band that has played the most Riot Fests. They were even at the second one back in 2006! They have also enjoyed a career that has spanned over three decades and they show no sign of slowing down. The band also still makes new records and are incapable of putting on a bad performance. Even during their questionable “U2 years” the band never failed to deliver the goods live so it is always a good thing when they are on the Riot Fest bill. They played pretty early in the day and plenty of people made a point to come watch them play. They did a bunch of the staples of their usual set (ie: the old favorites) and sprinkled in a few of the new songs which unsurprisingly have a very similar sound. The crowd loved it all and it’s doubtful anyone would complain if they came back for a few more Riot Fests in the future.

UK punk forefathers, the Buzzcocks quickly followed giving a nice one-two punch of old punk rock after 7 Seconds. Despite that their physical appearance has aged considerably (well Pete Shelly anyway, Steve Diggle still looks the same), their ability to play a great set has not diminished whatsoever with their advancing age. They delivered a really tight set of their hits as well as a couple of more current numbers. The only fault anyone could come up with in their set was that they were only allotted a half hour. It flew by in no time and the fans wanted more! Bring them back next year, Riot Fest, and give them at least 45 minutes please!

Though they were technically proficient and sound more like a rock band, Television is often credited with being a proto-punk band that helped form the early New York scene (along with Patti Smith who played the following day). They don’t perform very often these days and getting them on the Riot Fest bill was a wonderful treat for music fans of all ages (whether the kids knew it or not). This band is legendary and while they barely moved around on stage while they performed, what they played was simply amazing. These guys played perfectly and many people who appreciated their legacy and music history were blown away by getting to see them play. It was hard to find fault in their set list either which was culled from mostly their first two albums. Excellence!

A puzzling band who seem to have a massive buzz about them played next and they also drew one of the largest crowds of the day. Die Antwoord played louder than just about anyone the entire weekend and their music is often really grating and downright irritating. The band members are also an oddball looking bunch that look like they were on various episodes of Cops being arrested for various drug related charges. The girl has this grating, squeaky, voice and the guy looks like he runs a meth lab and recently got out of prison but damn if they weren’t fascinating to watch. If you weren’t on hallucinogenics then watching their set was akin to watching an accident or a drug bust,  you can’t look away out of curiosity. Despite the fact that the music was more irritating than it was entertaining, they were visually interesting  and had a ton of energy and were quite the showmen (and women).

The recently reunited Afghan Whigs were another example of how for some bands that time stands still regardless of the amount of time they spend away or dismantled. Not only was the sound mix for them fantastic, but they played like they’ve been doing this non-stop for 30 years. These guys looked like they were enjoyed themselves quite a bit up there too as there were more than a few smiles among the band members. They started with two songs of their brand new album, Do to the Beast, and that album is as strong of a comeback album as you could hope for. Surprisingly they only did two songs from Gentlemen and neither one was the title track. It didn’t matter, what they did play sounded great and Greg Duli’s trademark raspy voice sounded as sharp as the band’s playing. This was another big treat to see.

Some bands get bigger years after they break up or start to become relatively inactive. The Wu-Tang Clan is a perfect example of a band whose cult following continued to grow despite how infrequent they now tour and put out records. The size and diversity of the crowd that gathered to watch them play is a testament to this. There was no place to move and if you were a late comer to the stage they were playing on then you were stuck about a block away from the stage. The band had more members on stage than you could count or keep track of and they all took turns doing vocals during different parts of the song. The massive crowd seemed to know the words to many of the songs and they shouted along to key parts of them. There was so much low-end emitting from that stage that on top of ruining the ears of any audience member foolish enough to not be wearing hearing protection but they probably hit the brown note for at least a few people and caused them to add a new kind of mud to their pants and the ground once they started involuntarily crapping themselves due to the force of the sound. It was great to see a rap act get some stage time again this year much like Public Enemy did last year.

Who knew Cock Sparrer had so many fans that they’d be near the top of the festival? They are far more popular than you may think and the huge crowd they drew who mostly seemed to be familiar with their music was proof. These punk old-timers sounded amazing and still had that youthful energy they had in the early days and had the crowd singing along to their various punk working class anthems. This was probably the band’s performance that had the least amount of skinheads in the audience in their long history and it was an hour of good times and solid punk tunes that really got the crowd fired up for the punk highlight of the festival that would follow these guys.

One of the finest bands from the early California punk years, The Descendents, played to what had to be the biggest crowd they’ve ever been in front of. This was their third Riot Fest and instead of just coming to town and doing their normal, great set, they participated in playing an album. The band did Milo Goes to College in its entirety and that also meant they played, “Jean is Dead” which may have been a first for them and if not, a first in about 30 years. If this wasn’t enough, they didn’t just play this with their current lineup (which as been the same lineup since the Enjoy album) but they had Tony Lombardo play bass for this album. Tony played on the actual record so this was an amazing thing to witness for long time Descendents fans! Seeing the band, who is always on top of their game no matter how long between performances it has been, is always something special but to see them play their best album from start to finish was a dream come true. It was no wonder the crowd went as far back as the eye could see, they all wanted to see one of the all time greatest punk albums be performed in this once in a lifetime event! When they were done, Karl Alvarez came out on stage and took Tony’s place on the bass and the band did another half hour of one great song after another. It was one of the best performances of the weekend and was easily the best Descendents performance since they’ve been back together and probably eclipses some of their performances of the ’80s as well! What an amazing way to end an evening and there was still one more day to look forward to!