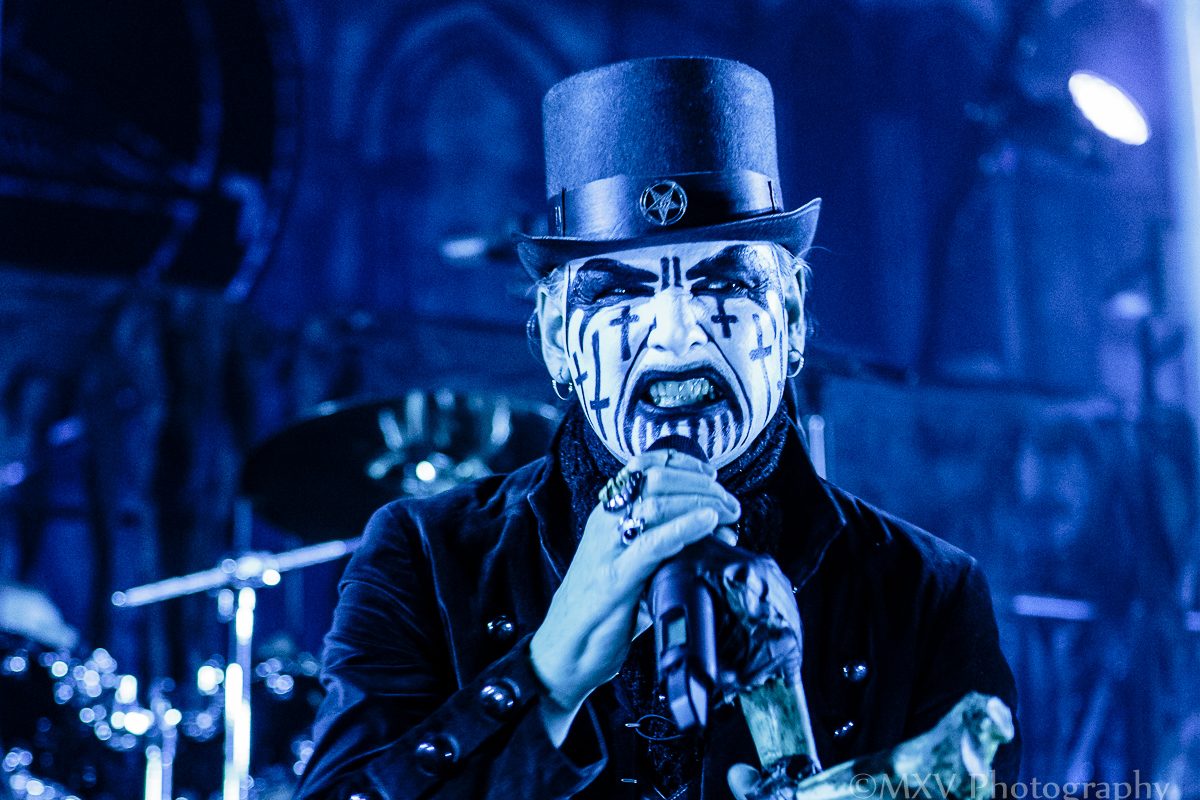 It has been a long time since King Diamond toured the United States. It has been something like six years since he last graced us with his presence which coincidentally is the last time he released a new album. Things didn’t look good for him a few years ago after first undergoing back surgery which required him to cancel a tour, then in 2010 he was rushed to a hospital where he underwent triple bypass heart surgery. We almost lost our King but thankfully he pulled through and made a full recovery (including changing some health habits like quitting smoking) and seems back and as good as ever. King Diamond and his talented band made their long-awaited return to Chicago to a sold out crowd at the Vic Theater and boy was it worth the long wait.

King Diamond always had theatrical stage shows and last night was no different. They had twin staircases set up flanking the drum riser that were connected by a balcony. Various props adorned the stage and the entire thing was fenced in with some steel fencing (which proved difficult to shoot through). The fencing looked cool but partially blocked people’s view but the overall effect looked good. The backdrop changed between a pentagram and upside down crosses that lit up and a couple of different images taken from King Diamond’s various albums.

When the curtain parted, King Diamond was up on the balcony with an illuminated pentagram behind him and he was holding his trademark cross bone microphone. He was wearing a top hat that never left his head the entire night and his face painted up in the usual King Diamond way. He looked pretty much the same as he always does which is amazing when you consider all that he’s been through with his health recently.

The band opened with, “The Candle” which is the first song from their first album, Fatal Portrait and not one minute in King Diamond  showed that not only did he look good, he sounded as good as ever. He was nailing his trademark falsetto vocals with perfection and his voice sounded as strong and his range as good as ever which quitting smoking probably  made easier. The crowd was banging their heads and roaring with applause as King Diamond made his way down the stairs to the main part of the stage. They quickly followed with “Sleepless Nights”.

Grandma made an appearance for the next song, “Welcome Home” from Them. She rolled out on a wheelchair and looked to be about 150 years old. She was very creepy. She was able to get up and hobble around the stage with the aid of her cane and it made for a great visual tie-in with the song as that was a concept album that revolved around her.  As the show progressed the theatrics changed a bit which included a couple of druids, a living female puppet on a string, a doctor, and a priest. The band played songs from quite a few King Diamond albums and they even did two Mercyful Fate songs.

After bulk of the main set the band came out and played “Cremation” while King Diamond lured Grandma over to a casket and then loaded her into it and then cremated her in it! It was a really cool effect and when the casket was opened again it revealed a charred and still smoking skeleton. The band left the stage again briefly and returned for another encore which finally gave the Abigail album (their best one) some love when they ended the show with “Funeral” and “Black Horsemen” which was one hell of a high note to go out on. Welcome back King!