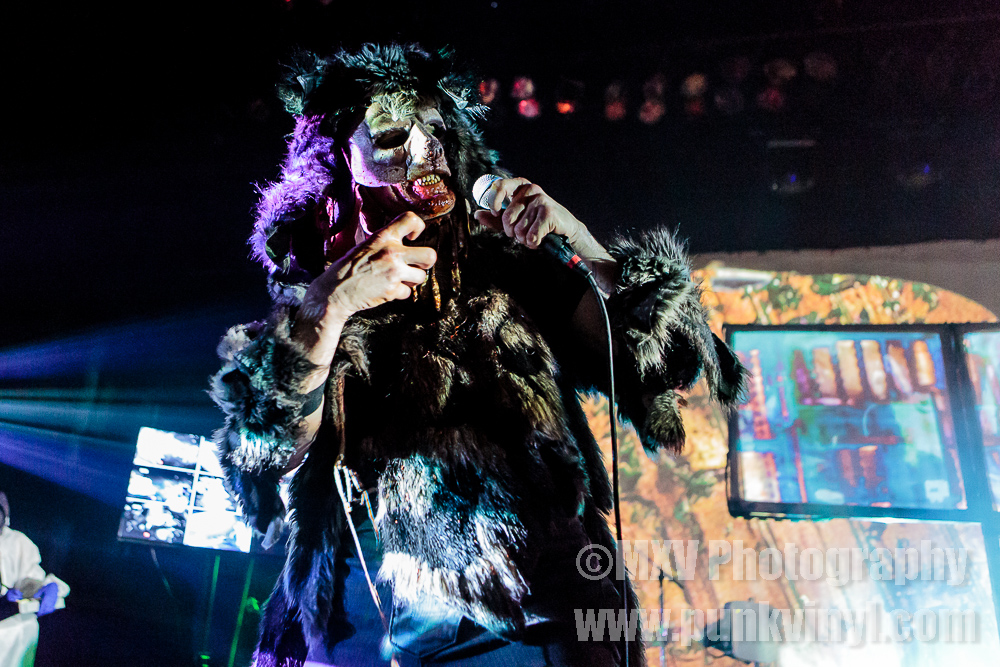 2014 was a good year to be a Skinny Puppy fan because not only did they tour this year, but they toured twice! They started the year off with one tour (the Live Shapes For Arms Tour) and are now ending it with another one. Depending on where you live you had at least one opportunity to see them play and for a major city like Chicago, where the band has always had a large following, you had two!  That’s a great way to celebrate a band that recently turned 30 and through a good twist of fate they brought along another classic industrial band with them on this tour that made this tour an even bigger treat for the older fans. Dubbed the Eye vs. Spy tour, this tour features four bands: Skinny Puppy, Front Line Assembly, Haujobb, and Youth Code.

Those who showed up early got to see an abbreviated set by Youth Code. Anyone who got there more than a half hour late though (most of the audience) missed out though. The word on the street is they put on a good performance and worth seeing if you can get there in time which was difficult for many of us with longer commutes and day jobs.

Haujobb played second and while they may not have the long history of the bands that followed them, they’ve been around for quite some time. They are industrial band who fall a little more into the dance side rather than the rock side of the spectrum. They played a tight set that was very enjoyable and the fans seemed to really appreciate it. Band leader/vocalist Daniel Myer talked a lot between songs and lightheartedly took umbrage with someone’s claim that Chicago was home to industrial music and asked the crowd if they ever heard of Einsturzende Neubauten and reminded them that they were first and they were from Germany. The crowd laughed and many agreed with him. Haujobb played about a half hour and were quite enjoyable  and since they are from Europe and don’t tour much it was a rare chance to see them live here in the states.

Front Line Assembly was added to this tour before it got underway when a different band dropped out. What this meant for the older industrial fans was a double dose of veteran bands that we grew up with. Front Line Assembly is the brainchild of Bill Leeb, who did time briefly in Skinny Puppy in their very early days and then started Front Line Assembly after parting ways with Puppy. The band has been going pretty much non-stop ever since and for a while were one of the staples of the Wax Trax era of industrial music. Time has been very kind to Bill and  his band as they came out with all guns blazing and put on an energetic 50 minute set that was very light on the old material but got the crowd moving and excited throughout the entire performance. The live band was filled out with a drummer and two guys on electronics and the occasional guitar. Bill never held still and marched and stomped around the stage while singing and he even added additional percussion while not singing.

After quite a bit of setup and last-minute equipment checking, the sold-out crowd roared when the lights went out and Skinny Puppy took the stage. Those who saw them on the tour at the beginning of the year would be familiar with most of the stage set as this tour uses the same elements with some nice changes. What Skinny Puppy did this time was take all the great elements of that tour and make some changes and additions in both costumes and the progression of the visual show as well as changed up the set list a bit (and for the better, it lightens the amount of brand new material to add back some older favorites and cranked up the visuals even further) which results in a sort of “directors cut” edition of the Live Shapes For Arms tour and the results were spectacular.

Their performance here on the last tour was one of the best performances they’ve done since the band reunited in 2004 and this performance blew that one away both visually and musically. The set list for this tour (WARNING: spoilers!) found a perfect blend between the newer material and the classics (eleven classics vs. seven newer songs) and the fact that they included “God’s Gift” back into the set made this show alone a must-see (that song is so good live that they should be contractually obligated to play it at every show forever).

Visually there was so much going on and Ogre had numerous costume changes throughout the show which saw his character morph into different animal and mutant like creatures while he experimented with liquids, assassinated someone, was abused, and later beaten and stuffed into a box and carted away at the story’s conclusion. There was a little more use of blood this time out but it pales in comparison to previous tours and truth be told it wasn’t even necessary. The different characters Ogre became were not only visually interesting but he gave a unique personality to each one and it was so captivating that it was easy to get sucked into what he was doing and completely forget ones preconceived expectations of what a Skinny Puppy show should contain. Ogre’s vocal performance was better than ever and the sound quality was so amazing this time out that it ended up being not only a perfect performance but one that can go down as one of their best performances of any era of the band. They seemed to have a renewed enthusiasm on this tour and it really showed in every detail of their show.

When the main set finished and Ogre was carted away in the box, the band returned a few minutes later for an encore which was the first time the audience got to see Ogre without masks and costumes on. He thanked Chicago for being one of the consistently best cities they perform in and then gave a little speech which led to them playing their best live song, “God’s Gift”. If that wasn’t enough, they followed it with “Smothered Hope” and concluded with “Assimilate” leaving the audience to go home on a massive high from that trifecta of their all-time greats.  As the crowd filed out of the venue, a quick scan and some eavesdropping revealed that the feeling was pretty unanimous that this was one of the best Skinny Puppy performances ever and it was a wonderful early Xmas gift from these industrial music legends who show no sign of quitting and proved that the best may yet be to come.