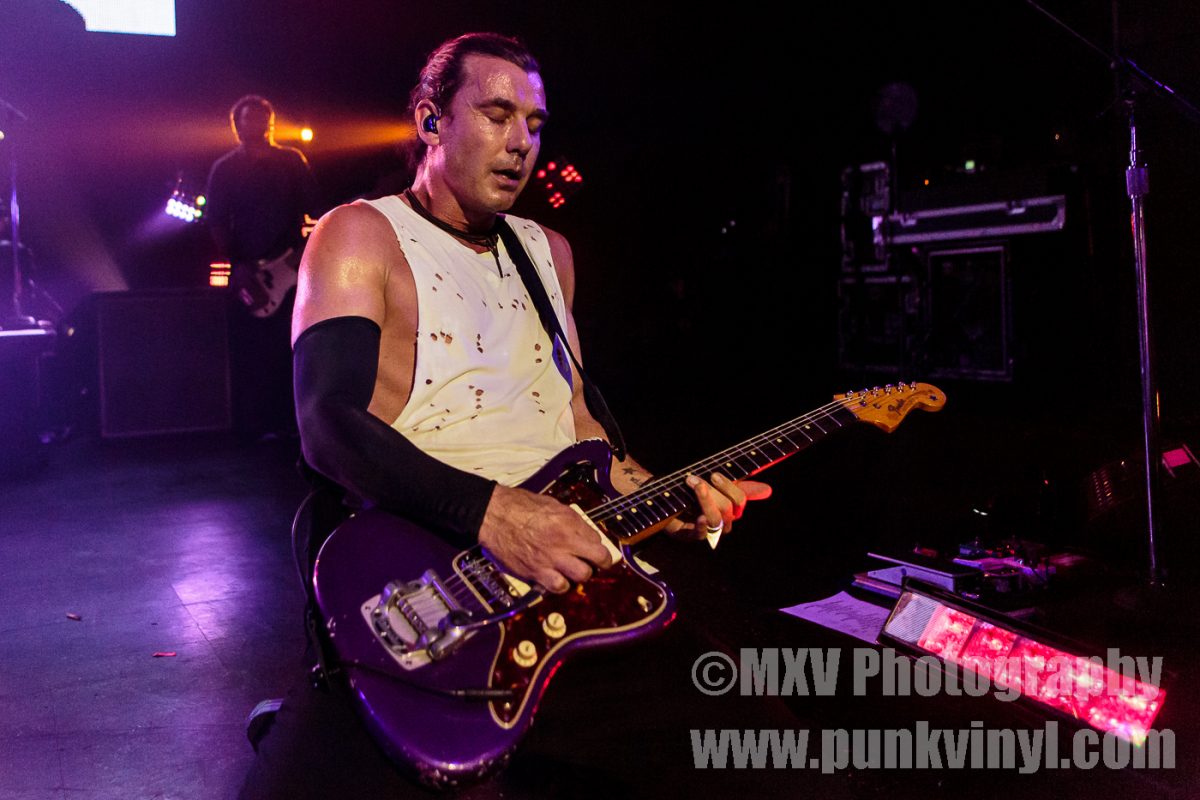 Friday the 13th wasn’t bad luck if you were a Bush fan as the band made their return to the Riviera in Chicago, IL. The band is touring in support of their latest album, Man on the Run and while it may have been sub-zero temperatures outside, it was about 80 degrees in the Riviera once it was packed to the rafters with fans.

Theory of a Deadman delivered a 45 minute set of alternative rock songs. They mixed a hint of country and acoustic rock in their mostly melodic sound and they were quite enjoyable. Had they been around during the big alternative rock boom of the early 1990’s they probably would have been a household name. They were a five piece with the lead singer often playing additional guitar depending on what song they were playing. The crowd seemed to really enjoy them as they got a pretty big round of applause when they were finished.

People were packed in the venue like sardines by the time the lights went down and Bush took the stage. Gavin Rossdale looks like he’s hardly aged a day in the past twenty years and he’d soon prove that time hasn’t slowed down his energy levels either. The band opened with “Sound of Winter” off of their 2011 comeback album, The Sea of Memories,  which is one of the better songs off of that album and a strong opener. The women screamed as Gavin took the stage and everyone in the crowd seemed excited. They wasted little time between songs before following up with “Bodies in Motion” from the same album. Gavin was moving all over the stage and jumping around and was all smiles as he as his band delivered rock solid renditions of both new songs and old favorites. When the band played, “Everything Zen” nearly the entire audience sang along to most of the song. The crowd joined in plenty throughout the set as the sprinkled in the hits and old favorites like “Swallowed”.

The five songs they played from Man on the Run showed that the band can still write great, catchy rock songs with great hooks and loud guitars and the band played with such enthusiasm it was like they were given a second lease on life and once again want to leave a lasting mark on music fans. After close to 90 minutes of nearly non-stop action, the band ended their main set with “Little Things” which the crowd went nuts singing along to while Gavin took to the crowd and sang the entire song from different parts of the audience both on the main floor and way up high in the balcony. Groups of fans huddled around him and all hugged as they sang along to the chorus and people scrambled to try to capture the fun on their cell phones and cameras.

After a few minute break the band returned for a four song encore that featured, “Machinehead” (which got a huge pop from the crowd), Glycerine (which Gavin performed solo), and a really fun cover of the Talking Heads’, “Once in a Lifetime” which sounded great. The show ended with, “Comedown” which was a pretty appropriate song to end the show with as the crowd didn’t seem like they wanted to come back down from the high they were getting from such a great performance.  Bush really delivered the goods on Friday night and it is great to have them back and they more than prove that they aren’t just a 90’s nostalgia act based on the strength of the new material and hopefully this means there’ll be more to come in the future.