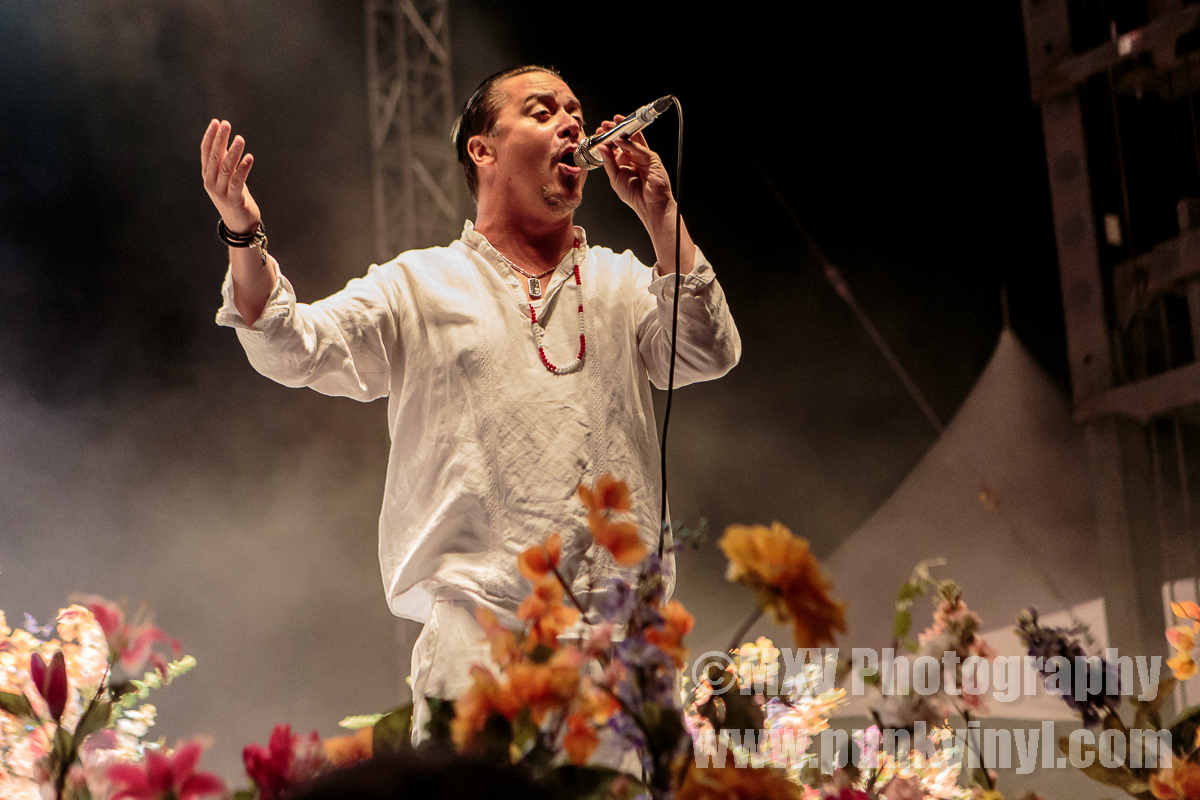 Riot Fest had a bit of a rough go of it this year, first with having to find a new home when some halfwit alderman decided he didn’t like the fest being in “his park” anymore despite the good that the fest did for the community the past few years and then with a little over a week to go before the fest started in its new home of Douglas Park, the hospital next door threatened legal action to put a stop to the fest. Those Riot Fest folks always seem to persevere though and the fest started on time on Friday with the only hitch being the fact that it was raining. The rain has become an annual event with the fest as this is the third (out of four) Riot Fest in a row where it rained at least one day. This year the mud problem that followed wasn’t nearly as severe and they did the best they could to keep it under control. It certainly didn’t slow down a massive crowd from turning up each day, though Friday seemed to have the smallest attendance of the three-day festival, though it was still packed full of people who didn’t let a little rain early in the day prevent them from seeing such a great, diverse lineup of musical acts.

Detroit proto-punk band, Death, got the day started early for those who skipped out of work to come to the fest after lunch time. These guys were punk rock before there was such a thing and they didn’t even know it at the time. The rest of the world didn’t know it either except for the most hardcore of record collectors with deep pockets who were able to find a copy of their extremely rare 7″ single and it wasn’t until the documentary film about the band came out that the rest of the world caught on. They are a fantastic band that was made up of three brothers, one of whom passed away a number of years ago. The two surviving members along with a new guitarist have been playing as Death ever since the release of the film and they even have released new material. Given that they only had about a half hour to play, they opted to stick to playing pretty much the entire For the Whole World to See album, which has all their great old songs on it. They were all smiles and they played to a very large crowd, something they definitely deserved to be doing. They sounded great and it was a great way to kick off the fest.

Fishbone made a return to the fest after a couple of years and this time they were sporting brand new jumpsuits which Angelo made sure to inform the photographers of. The band started with a long spoken word piece by Angelo before the band kicked it into high gear and they delivered a super energetic set of their ska/punk/rock fusion. They have so many members in the band on stage there is never a dull moment and the crowd was dancing and singing along to many of their songs. These guys have been at it for decades and it was nice to see them playing to a large crowd again and time has been kind to them.

Another blast from the past, Living Colour, took the adjoining stage after Fishbone was complete. These guys were a big deal for a short period of time in the late 1980’s and their début album was excellent. Their follow-up was pretty good as well but they seemed to fizzle out not long after that. The band has been touring somewhat regularly however and really are a great live act. Singer, Corey Glover, started the show by coming down inside the barricade and singing with the crowd before heading back to the stage and singing over some great rock music. Guitarist, Vernon Reid, is a true wizard of the instrument and showcased his talents on the huge Riot Fest stage. They drew a sizable crowd too and put on a fun show.

Local punk favorites, and no strangers to a Riot Fest, 88 Fingers Louie, played next. For those complaining where the punk acts were, this was one of them. They played a speedy set though the mix during it was pretty lousy which made them sound really muddy. Sound issues aside the band played pretty tight and you could tell it was a good performance marred by PA issues. That guitar player sure has a lot of hair too which he whipped around as he played lightning fast chords. Aside from being a skilled guitarist he probably has the longest hair in punk history.

Eagles of Death Metal played to a huge crowd, though their name was awfully misleading as they don’t play anything remotely resembling death metal. They also didn’t have Josh Homme playing with them either but that didn’t stop them from playing some really catchy rock tunes. They had a guitar player who looked like someone from ZZ Top but actually wasn’t a member, just someone who stole their gimmick. That guy sure could play though, as could the rest of them and it was obvious why so many people packed in tightly to see them. They were flashy players too and while some may complain that the Queens of the Stone Age guy wasn’t there, it was he who lost out as these guys were fun.

Lee Scratch Perry may be a legend in Reggae music but the fact he made fans wait about 20 mins after his set time sitting through his band wasting time before he finally took the stage kind of makes him an asshole. Those that weren’t getting stoned out of their minds were bored and frustrated waiting for him to finally take the stage. I guess that getting paid for a whole set but only performing 60 percent of your allotted time is good work if you can get it. One of his backup singers actually at one point actually said “he’ll be out soon, he’s on Jamaican time”. Unreal!

Coheed and Cambria made a return to Riot Fest this year, much to the delight of the thousands of people who showed up to their stage to watch them perform. Their progressive rock style, which was often melodic, was played with technical precision which is an impressive feat considering their guitarist/singer’s face is almost constantly covered by his giant mane of hair which means there’s no way he can see what he’s playing most of the time!

Anthrax made their Riot Fest début this year and they took the opportunity to kick the ass of a giant audience. These guys played with the passion and intensity of their younger selves and proved they are still one of the best metal acts around. They played a ton of their most popular songs, many from their classic Among the Living album. They could do no wrong and it is impressive how all these years later they still never hold still on that stage. Many of us older folks would love to find out where the fountain of youth is they’ve been drinking from to keep up that kind of fast pace through their entire set. Hopefully these guys will become Riot Fest regulars, they sure earned that right!

Some bands reunite and you can tell it is just for the money, and then some bands reunite and it is like time stood still and they are just as good as ever and their new material is up to par with the classic record of their past. Faith No More falls into the second category. Despite at one point complaining they were having trouble playing due to sound bleeding over from other stages of the fest, that didn’t stop them from a pretty stellar performance that mixed some of their new songs with many fan favorites. The stage was complete covered in flowers so the band appeared to be playing in some sort of garden It made it kind of hard to see them at times but man did they play a good set. Hopefully they are back for more than just this new album and tour and they keep at it, they certainly still have a lot to offer over 25 years after they became a household name during their run in the late 1980’s/early 1990’s.

Ice Cube closed the night out on one of the big stages by starting his show off with some solo material before bringing out Yella and Ren and performing the entire N.W.A. – Straight Outta Compton album. That part was great, the solo stuff was very good as well, what was lame was he actually showed a commercial for the Straight Outta Compton movie in the middle of his set! That is probably the first time that a commercial has ever been shown during a live musical performance and it hopefully will be the last ever as well. Once the bad feelings passed after being subjected to a commercial, the rest of his set was spot-on and the sound for him was excellent. It was a mostly great way to close the first evening of Riot Fest after a full day of such great music.