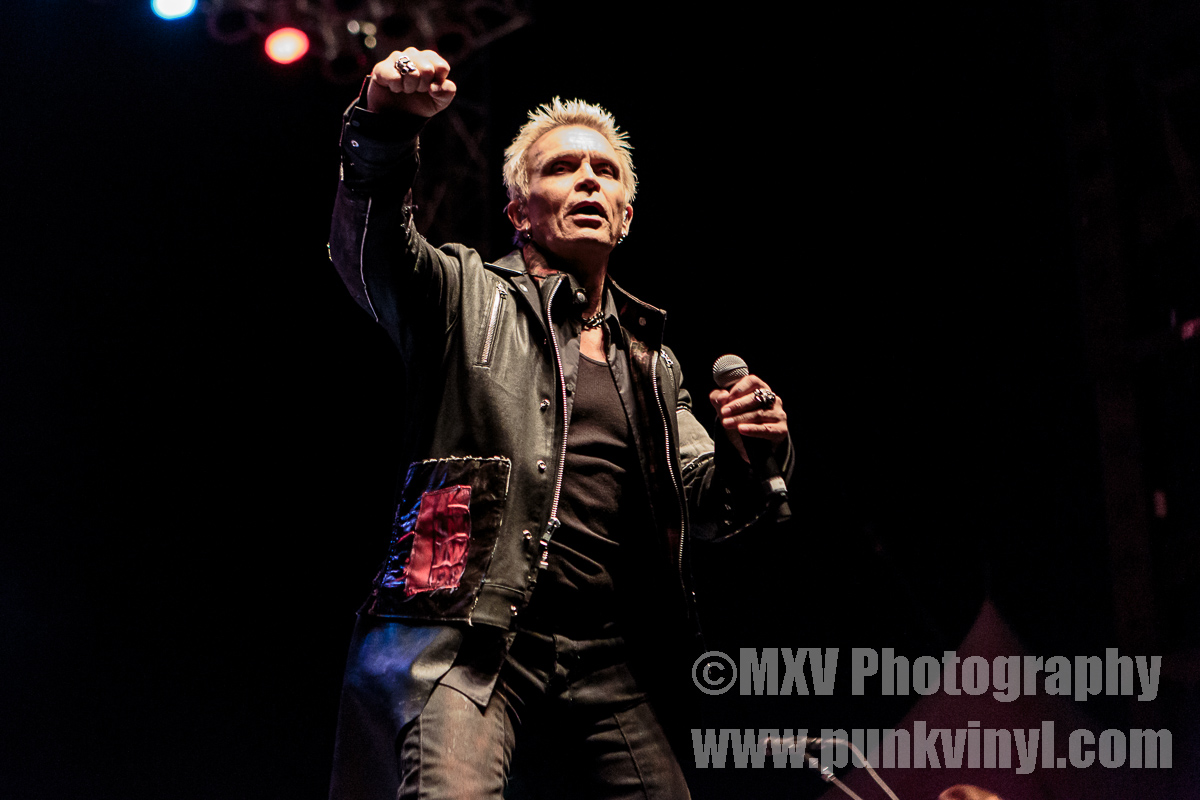 Day two of Riot Fest started much like the first day in that Mother Nature dumped a bunch of rain on Douglas Park all morning before finally leaving for good for the rest of the weekend. That meant the second day was even muddier than the first, and the mud seemed to multiply and get worse in certain parts of the park while others were in good shape and easy to walk on. None of it prevented anyone from coming to the fest though as the amount of people there easily had to double the previous day and kept growing as the day progressed. No one was going to let some mud prevent them from enjoying another day of good music, good food, and carnival rides and boy did they have a lot of good music on this day!

There hasn’t been much in the way of shoegaze music in Riot Fest’s past but it was nicely represented this year by Swervedriver. They played a rock solid set that had some of the best sound quality of the day to top it all off. Their swirling guitar parts and melodic vocals hit everyone right in the sweet spot and they lived up to the name of the genre by often looking down at their shoes (actually it was their guitars) a considerable amount of the time they were playing. It was like living in the early 1990’s all over again and it sure sounded good.

Punk rock was once again represented in one of its oldest and purest forms when The Damned took the stage and proceeded to steal the entire festival. Their 45 minute set featured many of “the hits” and they somehow keep managing to play even better as they get older. Dave Vanian finally shaved off his pimp moustache and even painted up his face like he used to in the early days of the band and  his voice was smooth like soft butter. The Captian was up to his usual entertaining antics while wailing away at his guitar and the entire band seemed to be having a great time on that stage. The audience did too as they were all smiles too. The Damned opened with “Love Song” which is a great way to start their show and from there went on to play one classic after another including “Ignite,” “New Rose,” “Neat Neat Neat,” “Second Time Around,” “I Just Can’t Be Happy Today,” “Disco Man,” and even “Eloise” and “Alone Again Or” which was a nice surprise before closing their perfect set with “Smash It Up”. It was without a doubt the best performance of the entire weekend.

The recently reunited Babes In Toyland took the adjoining stage next and they were sporting a new, younger, bass player for this performance. While Kat and Lori looked noticeably older in the close to 20 years it had been since they disbanded, when they started playing it was like nothing had ever changed. Kat’s voice sounded exactly the same and Lori not only still pounded the shit out of her drums, she had her trademark smile on her face while doing so nearly the entire set. They played material from most of their catalog including some great early tracks like “Dust Cake Boy” as well as the strongest cuts from their pinnacle, Fontanelle. Hopefully there will be more activity from them in the future because it was a real big treat to have them back again, something no one thought was likely to ever happen. This was another big highlight of the fest.

Pennywise made another return to Riot Fest this year and the crowd that gathered for them was massive. It was as if tens of thousands of people suddenly just appeared at that stage who hadn’t been in the park until then. They went crazy too from the opening notes of the bands very energetic melodic punk and the energy never dissipated until their performance was complete.

One of the big draws of Riot Fest has always been the older acts that we grew up with so it was especially nice that Echo and the Bunnymen played this year. They opened with “Lips Like Sugar” and they sounded in fine form despite the numerous PA issues that plagued their set. While the band sounded good overall and played pretty much anything you’d want to hear, including their most popular song, “Killing Moon”, their stage presence left a lot to be desired as they seemed almost bored and going through the motions. At least the music sounded good, even if they may have been phoning it in a bit.

Bootsy Collins Rubber band brought the funk and the fun as the sun was starting to descend. They too, however, were disrespectful to the audience and the fest itself by going on late, and Bootsy came out even later as his band played for a good ten minutes before he finally emerged but once he did, it was a lot of fun and he was hamming it up the entire time. Bootsy also brought the bass to the funk as there was so much low-end it was bone rattling. It’s hard not to smile and have a good time during a Bootsy Collins performance.

Drive Like Jehu kicked the audiences ass as they put on a noisy indie rock clinic that lasted about an hour. They were loud, punchy, and sounded amazing. There’s a very good reason indie rock fans go so crazy about this band and the band educated tons of people to that reason this afternoon. If it is at all possible for a band to break up for decades and then come back sounding even better than before, Drive Like Jehu did it.

Billy Idol was a massive hit machine in the 1980’s. Aside from Michael Jackson it is hard to think of many other acts that had so many hit songs back in the MTV era. The guy has legitimate punk roots too having been the front man of Generation X so having him at Riot Fest seemed a perfect match. Billy and his band, including long-time musical companion Steve Stevens, belted out hit after hit and even threw a couple of new songs in the mix that sounded quite good. Highlights of the set included a rendition of Generation X’s, “Ready Steady Go” and almost every song Billy ever made a video for like “Dancing With Myself,” “White Wedding,” “Eyes Without A Face” and of course, “Rebel Yell”. The hits just kept coming and the blonde spiky haired singer was in top form. He played for an hour and it was great from start to finish.

As the last bands were wrapping up and the thousands of fans made their way out of the park it was the end of a second successful day of Riot Festing and after two days it was pretty apparent that whatever reservations fans may have had in changing locations were long gone as everyone was having nothing but a great time.

Check out additional photos from the second day of Riot Fest 2015 here!