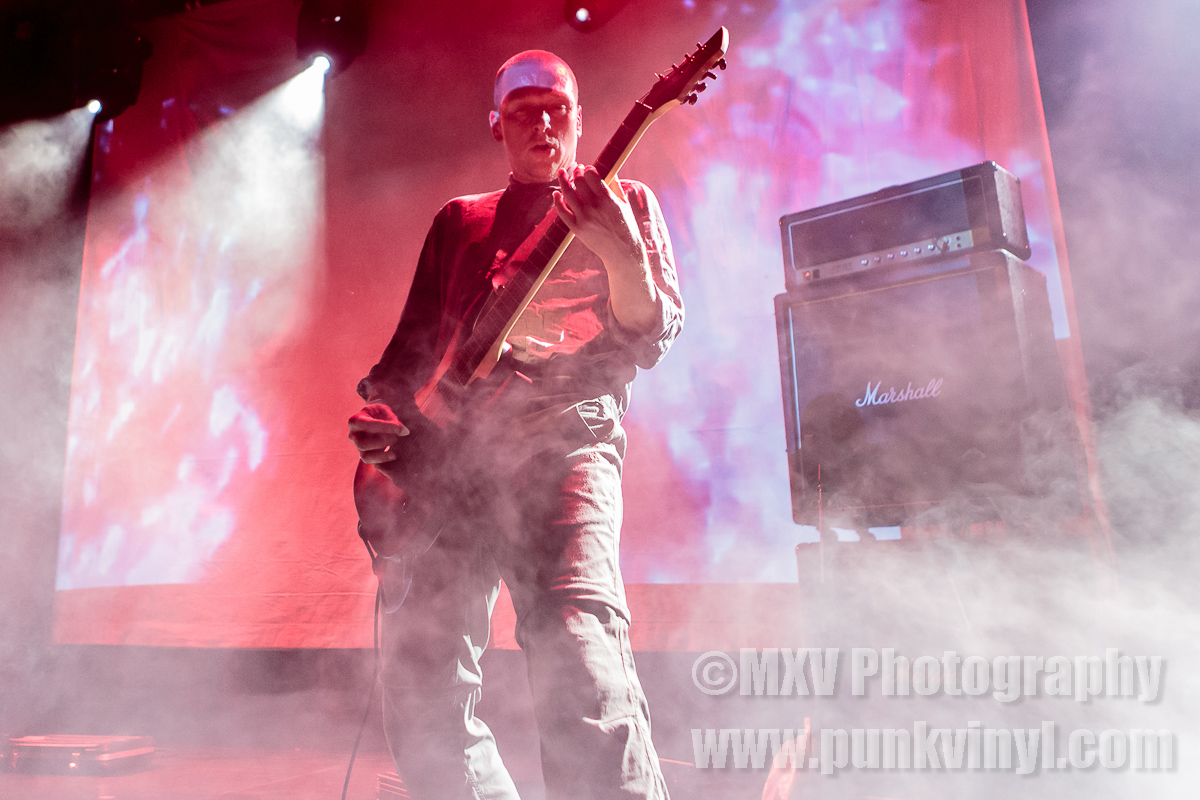 The fall always marks the end of outdoor festival season but that doesn’t mean you can’t have a smaller scale festival indoors and that is exactly what happened at Metro this weekend. The Cold Waves festival originally started as a one day event that was a tribute to the late, Jamie Duffy, who was a figure in the industrial music scene here in Chicago and someone who was loved by many. Cold Waves returned the following year in its new home (the Metro) and grew into a two-day event that features mostly industrial bands and raises money for suicide awareness/prevention. It’s a good cause and a good scene and the industrial fans came out in droves for the two-day event, the first which was on Friday night. Seven bands took the stage that night but those of us with day jobs and a commute only got to see the last few.

Author and Punisher was a one man act. This guy was surrounded by various forms of machinery along with electronics. It was like the next evolution of Einsturzende Neubauten in that he had big metal objects, including this really interesting contraption that he controlled with his arm that created drum sounds and he moved it front to back like he was throwing a punch, and a huge metal cylinder. He growled and yelled into an odd curved microphone array that obscured half his face and he also had another sort of device hooked to his neck. The music was really heavy and noisy with a lot of mechanical churning and was pretty aggressive. It was really interesting and fun to watch as well. As he played there was films being projected behind him. This is definitely an act worth checking out if you get a chance as there’s nothing else like it.

Back in the heyday of industrial music in the late 1980’s – early 1990’s, Paul Barker and Al Jourgensen (then the nucleus of Ministry) were pumping out side projects faster than we could keep up with them. One of the best side projects was one of Paul’s named Lead Into Gold. As Lead Into Gold he put out a pair of 12″s as well as one full album before shelving the project. Lead Into Gold never played live until Friday night when Paul Barker dusted it off and not only released a new 12″ EP but decided to play a show as well. This was a real treat for long time fans. Paul played a good chunk of material from the Lead Into Gold discography but for some reason failed to play, “Hatred”, which is hands down the best song. Sure most will say that the set closing, “Faster Than Light” is the best but that’s really just a close second. That puzzling omission aside, what Paul may have lacked in stage presence (he mainly stood still and sang) he more than made up for in a wonderful sounding performance.

Lustmord was up next and this was another one-man act. Unlike Author and Punisher, Lustmord was just a man standing at a table with a laptop while images were displayed on the screen behind him. The man just stood there staring at the computer and fiddling with things but for all anyone knew he could have simply hit play on his iTunes and then spent the time on stage checking his email and reading Facebook. The music was mostly ambient noise and pretty much all of it sounded the same. It came across rather dull and lifeless but then he got a huge applause when he was done.

The recently reunited Godflesh took the stage as the final act of the night and boy did they deliver. They were super heavy and super loud and they stuck mainly to their heavier material which meant that the band spent over an hour pummeling the audience as they pummeled their instruments. They sounded great and the crowd loved every minute of it. The material sounded even better live than it does on their great records and it was really great to have them back again as they were sorely missed in all those years since they disbanded.

The first day of Cold Waves was a rousing success, the packed house seemed to enjoy every minute of it and the best was still yet to come on the second day!

Check out additional photos from the first day of Cold Waves IV here!