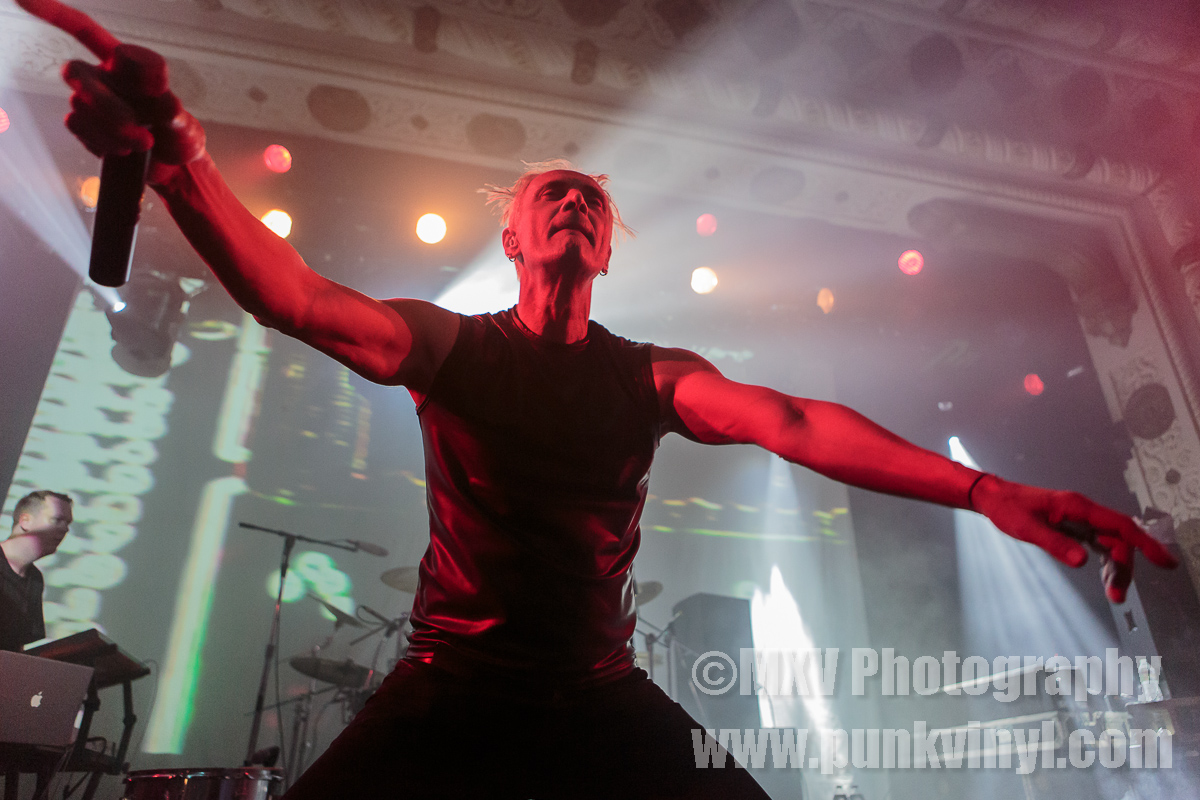 Saturday was the second and final day of Cold Waves IV at the Metro and boy did they make it every bit as good, if not better than the previous night. On paper this looked like a home run with Front Line Assembly headlining, preceded by Pop Will Eat Itself (or more realistically a PWEI cover band), Severed Heads, Cocksure, and a few other bands. Again those able to get there early got to see all seven bands and judging by how many people were packed into the Metro after the first three played, it appeared as many got their early.

Cocksure features Cold Waves organizer, Jason Novak on guitar/instruments as well as industrial music legend, Chris Connelly on vocals. These guys have started playing out recently after releasing a couple of impressive records and seeing them live put those records to shame. These guys came out and were all business. Hard-edged, mostly aggressive industrial rock with some techno seasonings thrown in for good measure. They played in really low light and had video images playing on the screen behind them as well as a fog machine regularly going off during their set. It was really intense and Chris Connelly is still one of the greatest front men of the genre and was in fine form, even entertaining the audience in between songs bitching about someone blowing bubbles like he was an old man. In fact he kept referring to himself as Chris Connelly’s dad which always got laughter from the audience. Fantastic performance and honestly they stole the show.

Severed Heads have been around since the early days so it was another real treat to have them as part of the festival. This duo stood at a table set off near the right side of the stage and tinkered with their computers and electronics (and sometimes even sang) while movies made for each song played on a screen that filled most of the stage. Each movie had the song title and album title at the beginning of it so you always knew what they were playing and where to find it should you be so inclined, which was a nice touch. The videos were very interesting to watch, all of them computer generated. They sounded amazing and played a wide variety of material spanning their lengthy career and the crowd loved every second of it. They received a massive round of applause at the conclusion of their near hour-long set and really these guys should have been playing right before Front Line Assembly.

A cover band calling themselves Pop Will Eat Itself took the stage next. This band featured one original member of the original PWEI, and it wasn’t even the main singer, it was the backup guy. He was joined by Mary Byker of Gaye Bykers on Acid/Pigface fame and a band of hired hands. While you can give them credit for playing with an amazing amount of energy which entertained much of the audience, the fact that they are calling this band Pop Will Eat Itself is disingenuous as they really are nothing more than a cover band. On top of that, at one point during the set they said the words that one never wants to hear when some inauthentic version of a band “reunites” and that is “here’s a new song”. Try as they might, it just wasn’t PWEI and didn’t come close to measuring up to this reporter who witnessed the real PWEI in their prime on that very same stage. To top it all off, when the two singers kept running towards each other and doing a jumping belly bump to each other it was just hokey. They ended their set with a cover of The Prodigy’s, “Their Law” which solidified their cover band status.

Front Line Assembly are one of the more beloved bands formerly on the Wax Trax roster and they have been at it for roughly three decades now and Bill Leeb and his revolving cast of cohorts show no sign of ever quitting and that is just fine with everyone. On the subject of cohorts, his best musical partner returned to the fold and that is Rhys Fulber. Bill and Rhys are responsible for what is considered to be the best years of Front Line Assembly and tonight they, along with the rest of the band members, showed that the magic is still there. Flashing lights, smoke, big percussion (sometimes by as many as three people at once), and Bill’s trademark vocals as he stomps relentlessly around the stage all played a part in one of their strongest performances in years. Bill Leeb has to be one of the oldest guys in the industrial scene and the amount of energy this guy has rivals that of any teenager, it’s awe-inspiring. The fans danced up a storm during their lengthy set and when it was over they still wanted more. It was a great way to close out the Cold Waves festival and a wonderful two days celebrating a great scene, honoring a fallen brother, and educating people that there is always a choice and people who care. Great job overall Cold Waves, we all can’t wait to do it again next year!

Check out additional photos from the second night of Cold Waves IV here!