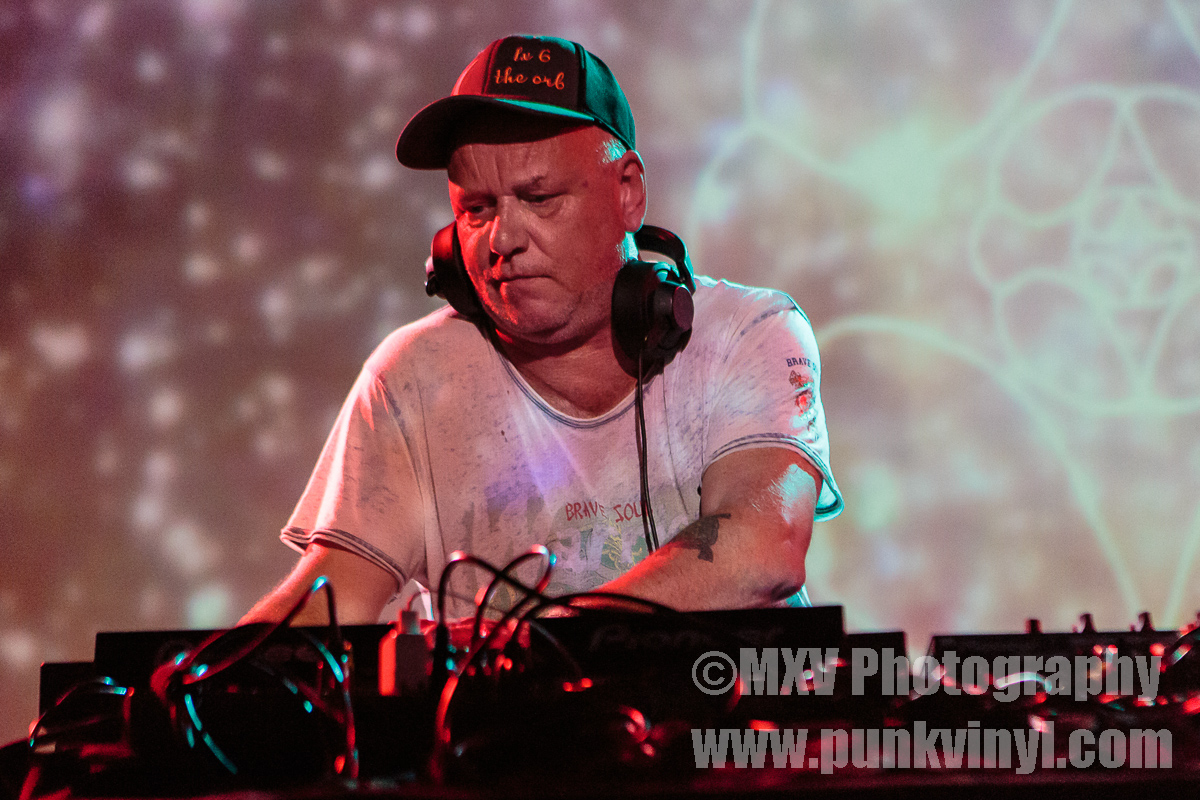 The Orb have been around in one form or another for a very long time now and are considered pioneers in electronic music. The nucleus of The Orb in recent times consists of founding member, Alex Paterson, along with Thomas Fehlmann and they took their excellent live show on the road to tour the United States recently which came to a close on Sunday night at Chicago’s Metro, a venue the band has played at multiple times in the past. This show was a perfect follow-up to a weekend of industrial music at the same venue the past two evenings with the Cold Waves IV festival.

First up was local act, Quadratic. This duo played electronic music similar in style to The Orb. The two men were armed with laptops and various electronics as well as a drum which one of the member’s played during various points in their one hour set. Their music was interesting and leaned heavily on the ambient side. They had images being displayed behind them as they played as well which complimented the experience nicely. The crowd was pretty sparse during most of their set but those in attendance seemed to enjoy them as you could see people dancing in various parts of the audience.

By the time The Orb took the stage, the main floor of the Metro was pretty full and they were very excited when the twosome took the stage. They took their positions at their large table which had nearly every square inch covered in gear such as CD mixers, multi channel mixers, laptops and other gadgets. The two men stood side by side and went to town manipulating the gear as the huge screen behind them displayed a colorful array of images. One could see how the experience would be appealing to the club scene while under the influence of hallucinogens. The band didn’t play proper versions of their songs this time, it was more like a live DJ set where they were taking elements of their songs and creating new versions of the songs based on familiar parts. The soundscapes they crafted were dense and the pacing was great and went through ebbs and flows of intensity and volume. While creating their magic on stage, Paterson and Fhelmann could often be spotted smiling when they’d lock into a certain groove and the two even took a few seconds here and there to dance in place.

And on the subject of dancing, the crowd did a ton of it. Just as the music itself progressed and built-in complexity, so did the number of people dancing until by the 90 minute mark nearly the entire main floor audience was dancing in unison. It was almost as interesting to watch as the captivating images on the screen behind The Orb while watching these two guys fiddling with their equipment and crafting such an ear pleasing soundtrack for the dance floor.

When the dust settled and the band left the stage they had clocked in well over a two-hour performance. The crowd was sweaty and tired but in agreement that The Orb’s performance Sunday night was well worth staying up late and being a wreck for work the next morning. More than a quarter century later The Orb are still masters of their craft.