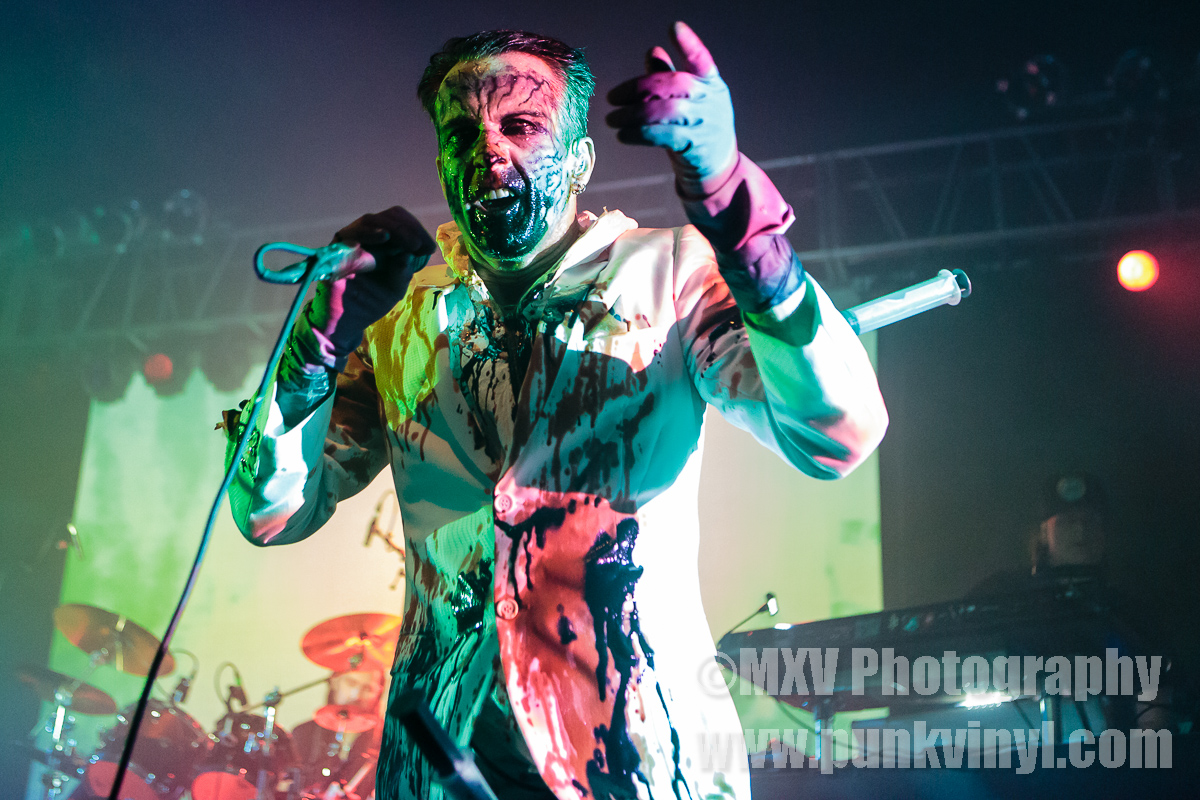 After an eleven-year hiatus from playing in Milwaukee, Skinny Puppy finally returned to our neighbor to the north on Monday night where they headlined a show at The Rave on their Down the SocioPath tour. This time out it was Chicago that they skipped so any Chicago area fans had to make the journey up to Milwaukee for a change instead of their fans having to travel here. Thankfully it’s not a very long journey and quite a few Chicago area fans were in attendance that evening. The band brought Youth Code along for the ride again just like last year.

Unlike last year, Youth Code was the only opening band this time and they got to play a lot longer. The band is a two-piece that features a guy on keyboards/electronics/backing vocals and a female lead singer. There’s been a buzz around this band since their last jaunt with Skinny Puppy and they certainly deserve it. They mix industrial with a bit of punk rock (in attitude as well as vocal delivery) and the result is some very energetic and aggressive music. While in a 45 minute set they did suffer a bit from quite a few songs starting to sound the same, there was some real gems in their set and the crowd really loved it. What they didn’t seem to love however was the lead singer’s penchant for spitting into the air which often times landed on those in the front row. Contrary to what the singer’s shirt said, spitting is not romantic, it was pretty stupid. Saliva aside, they were entertaining and a band worth checking out.

Warning: those not wanting set list spoilers will want to stop reading now and just look at the photos.

The room filled up with even more people by the time the lights dimmed and Skinny Puppy’s intro started. For this tour the band added a live guitarist who was about seven feet tall and was dressed like a character out of a Mad Max film. When the familiar opening notes of “Jahya” started (a song that the band has never played live before but much like it being the opening track of The Process it seemed a no-brainer to be a show opener), Ogre came slithering out wearing a white robe with a red sash and had a mask over his face that made him look like some sort of alien creature. Oddly enough instead of singing the vocals parts he kept writhing around the stage and the song ended up being an instrumental. With the added live guitar and drums the track was even more powerful than its studio version.  They immediately followed it up with “Dogshit” and it sounded incredible.

As the show progressed, a horned creature with red eyes would come up to Ogre while he was singing and would attached giant-sized syringes to various parts of his body. These were filled with various types of fluids like blood, a black substance that looked like oil, a neon green nuclear waste looking fluid and a metallic silver liquid. At various points either the creature or Ogre himself would inject himself with these fluids which would spill out onto his white suit that became more and more covered with the stuff throughout the show. Ogre often times squirted additional loose syringes of fluid onto his face and body. His actions and visual appearance changed during the progression as if he was going through different transformations throughout the main set.

Having already broken up by the time The Process came out, the band never toured (and sadly one of the band members passed away as well during that time) but this show could almost be viewed as the long-lost Process show. The set list was quite heavy on songs from that album, two which they have never played live before. The rest of the set list consisted of all classic era material with the only exception being “Village”. With the band having released four albums in their post-reunion era this was quite a surprise but as good as their modern stuff is you’d be hard pressed to find any long-time fan that would complain about this decision, in fact it made the show even more special. Songs like “Killing Game”, “TFWO” and “Tin Omen” were dusted off for this round of shows and “Fascist Jock Itch” was played live for the first time as well.  Live staples like “Worlock,” and “The Choke” made their returns once again. Every song sounded great and the live guitar added another layer to those complex songs and was a very nice touch. Ogre’s vocal delivery was as good as ever and he was very animated on stage bringing his characters to life as the rest of the band created the thick and powerful sound stage for him to play off of.

The main set lasted just over an hour and the seemed to go by in just a matter of minutes. The show was so engrossing that the time flew by and the next thing you know the band left the stage after “Assimilate”. A few minutes later they came back and did a short little improv (that they call “braps”) and then played “Smothered Hope”  and “Candle” (another first!) before leaving the stage once more. Some thought the show may have been over but they came back one last time and ended the evening with “Testure”. When all was said and done they clocked in about 80 minutes of performance time and somehow managed to show that as they get older, Skinny Puppy keep putting on better and better shows with each successive tour since reuniting in 2004 and still remain the absolute best band ever in their genre!