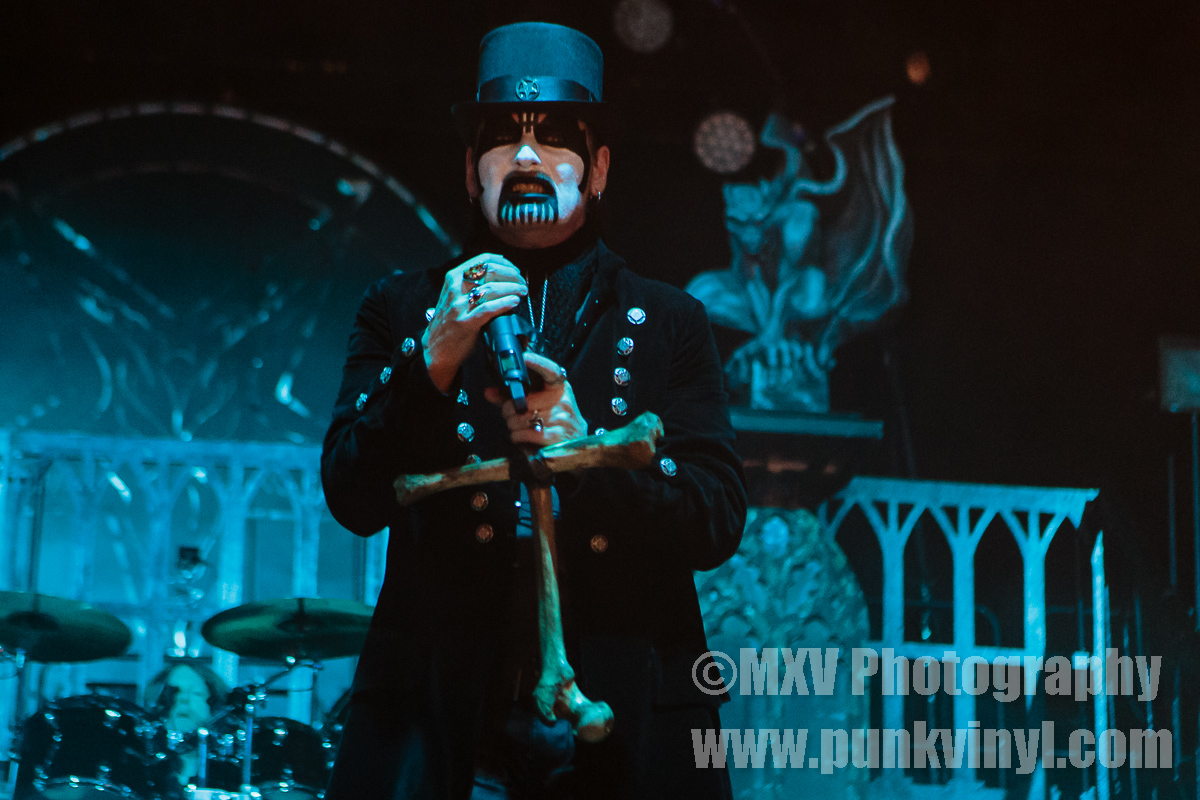 A lot of great metal shows have taken place at the Aragon Ballroom in Chicago dating back to the late 1980’s and that tradition continued on Black Friday when King Diamond returned to the venue. Metal fans filled the venue to witness this legend take the stage once again for a very special show.

Thrash metal veterans, Exodus, got the show started off to a great start as they warmed up the crowd with their patented brand of fast and aggressive metal. They played a bunch of songs from their latest offering, Blood In Blood Out, and then a bunch of their old classics to finish off their set. They played for 45 minutes and the crowd loved them. Having them on the bill made the night even more of a classic metal night as the two bands were big in the same era of late 1980’s metal and have kept at it ever since.

For this tour King Diamond was doing something really special and that was performing the Abigail album in its entirety. You’d be hard pressed to find someone who doesn’t think that was the best King Diamond record and now almost 28 years to the day since he took the stage at the Aragon to tour for that album he was back on that stage playing the entire thing! When his performance began the stage was graced with a stairwell on each side that were connected by a balcony and behind that was a backdrop that would sometimes change. Tons of fog and flashing lights filled out the rest of the stage and occasionally additional props surfaced to help tell the Abigail story.

Before the Abigail portion of the show commenced the King and his band played 30 minutes of various songs from his other albums, opening the show with “Welcome Home”. Grandma was wheeled out in her wheelchair before coming to life and hobbling around the stage with her cane as the King bellowed out a pitch perfect rendition of that track from Them.  He also opened his show last year with the song at it is a great show opener. When they got to the Abigail portion of the set they wheeled out a small coffin which produced a doll and the story began. The Abigail material sounded amazing and the King’s voice was as good as ever with that amazing vocal range of highs and lows he’s become famous for. There was very little time wasted between songs and the album played out like the story it told right there on the stage.

When the Abigail material came to a close the band put down their instruments and spent a great deal of time taking bows and thanking the audience. King Diamond seemed to be genuinely moved by the great response he received from the audience that evening. The band didn’t do any encore but they played for over 80 minutes straight so the fans definitely got their money’s worth in the performance, especially considering how special it was having the band perform their best album in its entirety. King Diamond also proved he still has a lot in the tank and can deliver a stellar performance while making it look easy. It was a great night of old school metal!