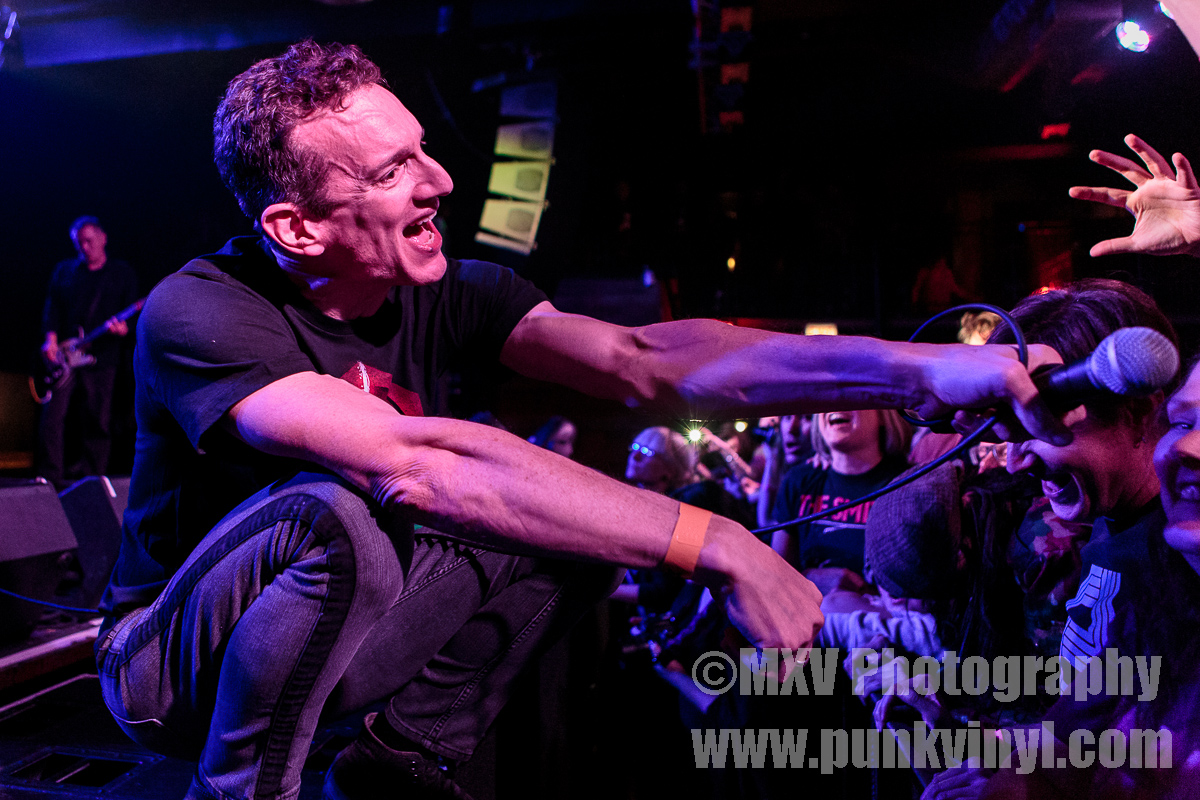 Just in time for the holidays, Naked Raygun decided to do a weekend of Midwest shows where they’d be debuting some material from their forthcoming new album as well as playing many of their old favorites. The first show was in Milwaukee and on Saturday night these Chicago punk superheroes played in their home town at the Concord Music Hall, which is a very nice club.

Death and Memphis and Direct Hit! opened the show. Death and Memphis had the unfortunate early slot so latecomers, such as those stuck in traffic, missed out on them. From all accounts they put on a solid performance though many seem puzzled that they have a stand-up bass player since they aren’t a rockabilly or psychobilly band, nor does he play as flashy as most stand up bassists go. They are a pretty good band though and those of us who arrived late missed out.

Direct Hit! played pretty standard fare fast tempo punk rock with melodic hooks. They were energetic and talked a lot between songs, often about football which someone should inform them is not punk rock. They got a mixed response from the crowd as some were enjoying them while the older folks were more apathetic towards them. They played a 45 minute set.

Naked Raygun took the stage as a five piece band this time with Pierre Kezdy and a newer member sharing bass duties. The band opened with “Mein Iron Maiden” from one of their recent singles and sounded in top form from the get go, they quickly followed up with, “When the Walls Come Down” from Jettison. It sounded just as good, if not better. In fact as the band progressed through many of the staples of their set as well as busting out a couple of tracks they never play like “Fever Island” they just kept sounding better. Naked Raygun really is a punk rock hit machine, they have so many songs that are loved by so many people that you’d be hard pressed to find another band with so many songs people love that they all can’t fit in a single live set.

A scan of the crowd during the band’s stellar performance revealed many old timers, many of them with their children in tow, exposing them to likely their first Naked Raygun show. At one point a ten-year old kid was crowd surfing while his mother and father watched, the dad beaming with a sense of pride as it was something he did back when he was younger. It is a rare thing that music from “our generation” can transcend a multi-generational gap and that a concert of the “parent’s band” is something their offspring enjoys just as much but that’s a testament to Naked Raygun’s superhero status in this city. The crowd was all smiles and that’s something you see at every Naked Raygun show and have since the beginning (except for the skinheads back in the old days because they never smiled lest they risk their tough guy status).

About two-thirds through their set, front man, Jeff Pezzati picked up a guitar for their usual pairing of “Peacemaker” and “Treason” before the band took a short break to hand out the “free shit”. This show’s free shit was a small black cowbell that had the familiar NR logo on it and said “ding-a-ling”. People went nuts climbing over each other to get them as the band was tossing them into the crowd and they were ringing them the rest of the show.

Aside from sprinkling in a couple of new songs from their forthcoming album they also did two unusual (for them) covers, Bowie’s “Ziggy Stardust” and The Smiths’ “Girlfriend In a Coma”. Both were a lot of fun and the crowd really got a kick out of them. They closed the show after played a solid 90 minutes with the show-ending staple, “New Dreams”. The band put on a flawless performance and it was a very special evening for old punks, newer punks, and even their families.