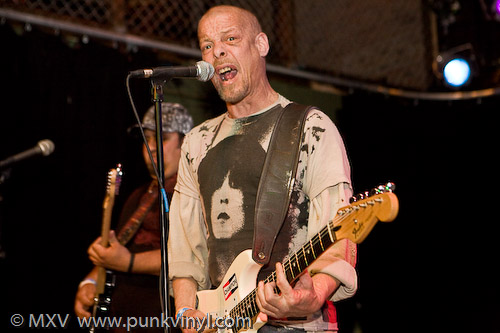 Punk rock in Chicago lost another comrade on Monday as Eric Brockman, guitarist/leader of Life Sentence, passed away. Eric  was a staple of the Chicago punk scene throughout the 1980’s, first in the Anti-Bodies and then forming Life Sentence.

Life Sentence only released a pair of LP’s, a demo tape, and a 7″ in their tumultuous time together. The band in the late 1980’s became more known for their infighting and lawsuits over control of the band name than for their great music. After the dust settled, Eric continued Life Sentence with a different lineup. Their first album was one of the best hardcore punk albums to come out of the city of Chicago, and we had some great bands so that was no easy feat! They were a great live act as well.

Eric’s decades-long battle with drug addiction was well-known throughout the scene and it spelled the end of his involvement in the punk rock scene and playing music for years. In 2009 he seemed to get it together enough to reactivate Life Sentence with yet another new lineup and played a couple of shows, but it was short-lived and he seemed to vanish again. Their show in 2009 was the last time I saw any version of the band, and the last time I ever saw Eric (which is where this photo was taken, sadly I wasn’t a photographer back in the 1980’s when I first saw the band).

Rest in peace Eric, your music left a lasting impression on me, as did the live performances of Life Sentence that I witnessed in the 1980’s.