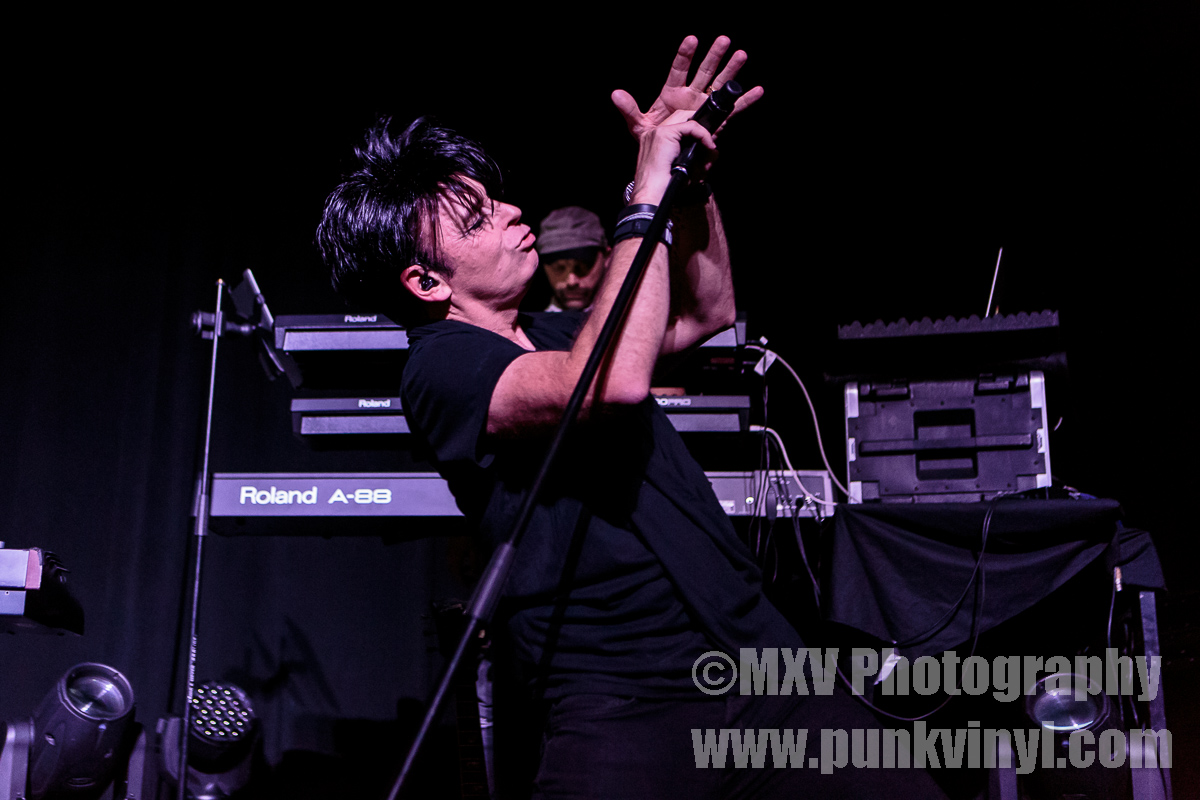 Gary Numan is on the road for a limited amount of special dates where he does a three night residency at clubs performing a different album each night from the early part of his career. The albums he is performing are the final Tubeway Army album, Replicas, plus the first two Gary Numan albums, The Pleasure Principle, and Telekon. The three albums comprise the “machine era” of Gary’s long and ever-evolving career.

Sunday night was the first of the three nights and the show began with a one-woman electronic act named I Speak Machine. This lady played electronic soundscapes while a film played . She sometimes sang and she had a full rack of various electronic gadgets to manipulate sound with. It was very much like a movie soundtrack played live. The film only played for the first portion of her set and the rest she just played her music with no visual accompaniment. It was interesting and she had a good voice.

Gary  Numan and his band performed Replicas for this first show of the residency. Gary was joined with a full band that included a drummer, keyboard player, guitar and bass players and Gary sometimes manned a second guitar for certain songs. The show started with the opening track of the album and the crowd was blinding by intense strobe lights. It was immediately apparent that a full band in a live setting added a harder edge to this 36 year old material and gave it a new layer of “oomph”. The material sounded as fresh now as it did over three decades ago. Numan was quite a musical pioneer back then and his music was easily a precursor to the industrial and electronic music that became in the later half of the 1980’s.

As the band played, Gary writhed around the stage, posed, stomped around and really gave an intense performance. To see that kind of energy in a 58-year-old musician is awe-inspiring and he had more stage presence and energy than musicians half his age. His voice sounded amazing and in the vocal department it was like time stood still. The band he has assembled really breathes new life into songs he’s been performing for decades, so much so that it actually makes the studio albums seem a little watered down in comparison. As great as Replicas is, hearing it played from start to finish by Numan and his band was an amazing treat.

When the band finished the Replicas material they immediately performed another half-dozen or so songs from the other two albums of this era before leaving the stage. Over 80 minutes had passed at this point and the band played the material to perfection and the crowd loved every minute of it, giving big rounds of applause between songs. After a few minutes off stage, the band returned and closed the show with an acoustic number, “Jo the Waiter” before ending the evening with “Here In The Black” which is from Numan’s latest album, Splintered, which just so happens to be one the best albums of his career. After the show the band took a bow and Gary thanked the audience before leaving the 1000+ people in attendance completely satisfied, many of them talking about how they can’t wait for the next night’s performance.