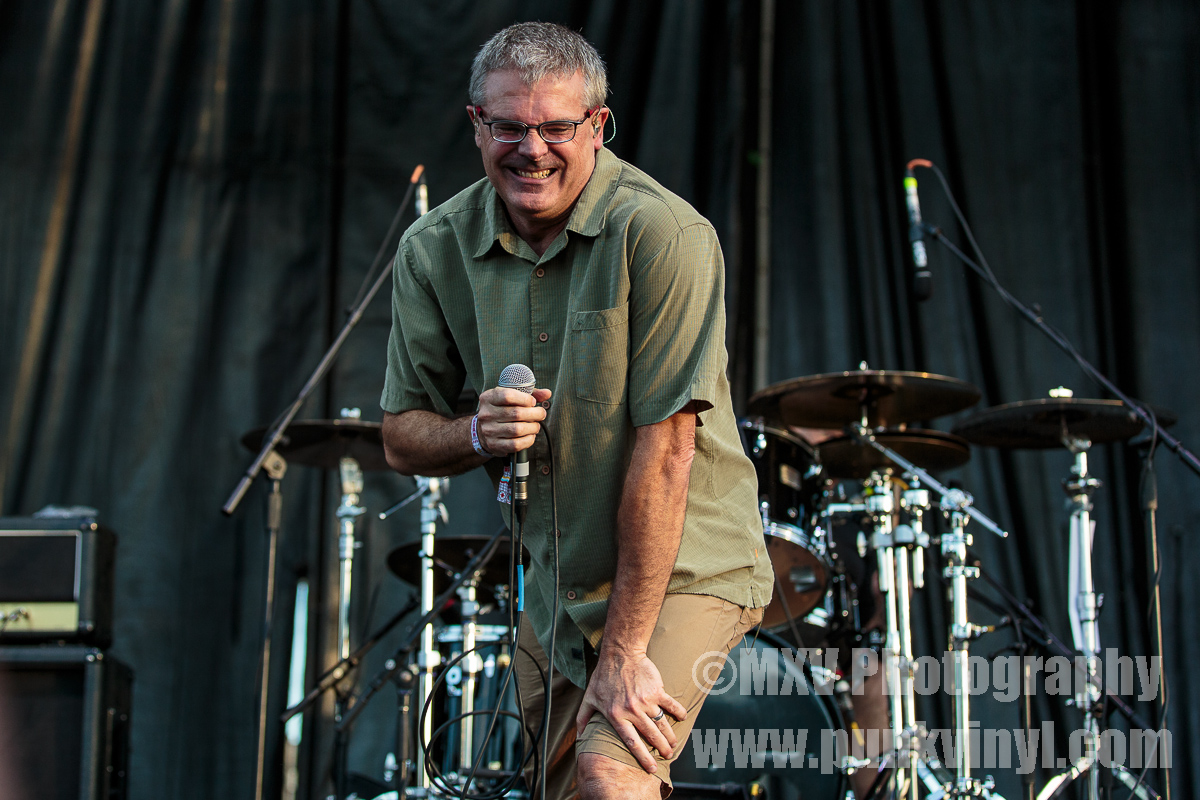 It was an even nicer day out on Saturday and not a rain cloud in site which meant this was the first Riot Fest in three years that it didn’t rain and turn the park into a big mud field. There was an even better selection of bands and there was easily twice as many people in attendance as the previous day. The fun got started around lunch time for those who were able to get up early enough to get down to the park early.

Fucked Up got things started pretty early and they must have gotten a good night’s sleep because they had an amazing amount of energy. The singer was all over the place and sang most of the set in the audience, which was no easy feat considering how tall the stages were and that he had to climb over the barricade to get to the audience. The crowd went completely nuts when this happened and mosh pits formed around him wherever he went while those closest to him sang along to the songs and got in on the action. These guys (and gal) were great and if you haven’t seen them before they are well worth checking out. What a great set!

The Vandals (the band that evolved out of the original Vandals that put out the classic, Peace Through Vandalism record in the early days of punk) made their first return to Chicago in many years and delivered a fun set. It was interesting to see how crazy the younger members of the audience went for their material that happened after the original band splintered apart leaving Joe Escalante as the sole original member. It is like there is two different generations of Vandals fans much like there was two different generations of The Vandals themselves. The kids went crazy, the band played great and had smiles on their faces for much of the performance.

Hometown heroes, The Smoking Popes were next. They played a nice selection of material from their career of solid pop/punk songs (leaning way more towards the pop side). These guys always put on a solid show and this was no exception and it is comforting still having them around playing shows around here.

Bob Mould has been on fire as of late, releasing a hat trick of great albums recently and his live shows have always been amazing. It seems that the older that Bob gets, the better he is as a live act and his performance on Saturday was further evidence of that. He opened his set blazing through three Husker Du tracks that consisted of “Flip Your Wig”, “Hate Paper Doll”, and “I Apologize” before going into a sampling of much of his solo works (and something from Sugar). he circled back to Husker Du one more time later in the set with a blistering rendition of “Something I Learned Today” which was a real highlight but the entire set was incredible and flew by in the blink of an eye. True to form, he played his set pretty much non-stop and would immediately start the next song as soon as the previous one was completed which was something they did in Husker Du constantly. Mould’s set was easily in the top five best of the entire fest this year and he should be allowed to play it every year for the rest of our lives. Now if Riot Fest could only find a way to get Husker Du back together to headline a fest like they did with The Misfits and Naked Raygun! That would really be something! Riot Mike if you read this, please make that happen!

Fitz and the Tantrums was a unique band that mixed pop, dance, and soul. They had both male and female vocalists, both with good voices. They had a few catchy tunes and they got the crowd moving their feet (in a non-moshing way for a change). A full set of their music was a little much for someone with generally harder tastes but they did have a couple of gems in the set that they played and were entertaining in a short dose.

The Descendents have become Riot Fest regulars and I can think of few things in life better than that. The band just put out their first album in 14 years and it is great and I was really looking forward to hearing some of those new songs live. Not only did the many new songs they played sound amazing, but so did the rest of their set of classics and “hits” from their many great albums. How this band keeps getting better every time they tour is one of life’s great mysteries but they played with the same amount of youthful energy they had back when we all were youths! It’s like time is frozen when they get up on that stage and they are timeless and ageless. Milo’s voice sounded as great as ever, Bill’s drumming even more precise and Stephan and Karl’s guitar/bass hits you right in the insides and makes you feel all warm and happy. Some may argue that other band’s were the best band of the weekend but they are wrong. The Descendents were the single best performance of the entire weekend. It was a little surreal to think that 30 years ago I was seeing the band play to maybe 1000 people and here they were now playing to probably 20,000 people. It is about time that the rest of the world finally realizes how great they were/are!

Another band from the old punk rock days that has become timeless and is still at it took the stage at dusk and that was Social Distortion. They are also Riot Fest veterans (this is their third one) now and for this year they played their entire White Light, White Heat, White Trash album from start to finish! Social Distortion always put on a great rock show and it was really special to witness them play this album in full, something they’ve never done before. The band played flawlessly and they even threw in “Under My Thumb” and “Ring of Fire” as a bonus at the end of their set.

Morrisey (who was not at all photographer friendly, hence the absence of photos) closed the night and decided to start his set 45 minutes late. All of the food vendors weren’t allowed to sell, serve, or prepare any meat during the two hours window surrounding his performance. When he finally did take the stage he delivered what sounded like a pretty solid set. His voice sounded good and there was a pretty massive crowd watching him. Since he rarely tours these days and is notorious for cancelling shows, having him show up and play was probably no small feat in itself so his fans in attendance had to be pleased that they even got to see him and the fact that he sounded good was just an added bonus. The crowd may have been going home meatless after his set but at least they were going home happy which brought an end to the second night of Riot Fest and the restless night’s sleep that probably plagued all the Misfits fans who couldn’t wait for the next night.