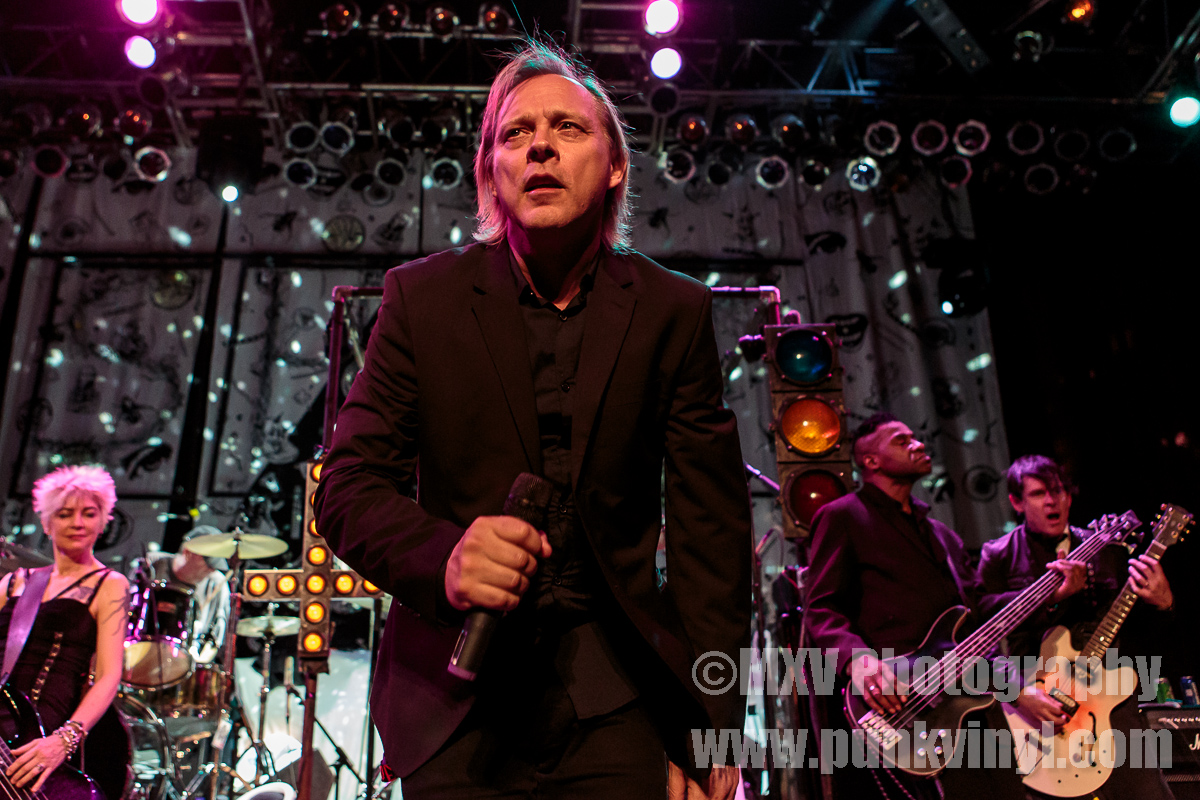 The industrial rock (for lack of a better term) collective known as Pigface turned 25 years old this year. For those of us who were around for their inception, the realization that it was a quarter century ago is somewhat alarming. The band had been mostly retired for quite a few years but over the summer an art exhibit showcasing Pigface artwork and the people who turned up to share their stories left an indelible mark on Pigface’s ringleader, Martin Atkins, and it came as little surprise to those who attended the event that Martin would “get the band back together” for one last hurrah, if anything to give Pigface the sendoff it deserved.

For the benefit of some of you readers who may not be that familiar with Pigface, a little history lesson is in order. Flash back to the end of the 1980’s as it morphed into the beginning of the 90’s. There was a blossoming industrial music scene happening around North America with Chicago being the capital of it thanks to Wax Trax Records. Skinny Puppy and Ministry were the two biggest bands in the scene and a young man named Trent Reznor had just put out the first album by his new band, Nine Inch Nails. It was on Ministry’s 1989 tour that a large group of musicians that made up the touring band (basically nearly everyone except Al Jourgensen) decided to get together when that tour was over and make some music together. This “super group” was named Pigface and industrial music fans went crazy for it. The band had a constant revolving door of musicians and the only rule to the group seemed to be that there were no rules and that resulted in some really groundbreaking and diverse music that lasted for years. Musician’s involvement to Pigface also had the nice side effect of turning on Pigface fans to the music of the various members’ other bands and expanded everyone’s musical diet for years to come.

A live Pigface show was always a spectacle. You never knew who or what you were going to get, the stages were never large enough to hold the ridiculous amount of musicians playing any given song, and the whole thing was just one big party that was every bit as fun for the people on stage as it was for the audience. The shows were events that people talked about for years and it was never the same show twice, even on the same tour.If you ever saw what it took to put a show like that together and what a logistical headache it was, you’d wonder why anyone would be crazy enough to want to bother but the world is thankful that Martin Atkins was just crazy enough to pull it off.

Friday night, Martin went crazy one last time to put together Pigface 25, what he is billing as likely the last Pigface show. Pigface sort of silently stopped some number of years ago and a quiet and uneventful ending was not what something so special deserved so thankfully Martin dipped into his pool of crazy this one last time for everyone to say goodbye. The lineup was possibly the biggest ever in the total amount of musicians. There were familiar faces from Pigface’s past as well as a bunch of new ones as well.

First up was W.O.R.M. who had put out some music on Invisible Records in the past. They played a familiar and enjoyable style of industrial rock that at times was reminiscent of KMFDM or Die Warzau. Their 30 minute set was quite enjoyable and during one song they handed out a ton of customized mini tambourines to the crowd who played along with the band during the song.

Another Invisible Records band, Project .44, was next. They played a more aggressive style of industrial dance music with loud percussion and had an intimidating looking masked man about the size of André the Giant pounding on metal trash cans. Sometimes when he’d drop the sticks he started banging on one of the cans with his head. They were great!

Leslie Rankine’s one woman show, Ruby, was the final opening act. She was up there with a laptop, a strange control box with a lot of colored lights that looked a little like the control board to the pylon in the old Land of the Lost TV show, and a couple other gadgets. Leslie really delivered a good set that showcased her wonderful singing voice. She’s quite a talent and despite the fact she didn’t play “Paraffin”, her set was still excellent and definitely the highlight of a solid lineup of opening acts, not only that but the audience would be getting more of her when she came back out with Pigface.

Finally it was time for Pigface to take the stage. They had screens set up and the lights were turned very low. As the opening drums to “Insemination” started, lights started flashing behind the screens in various places which made some cool silhouettes on the screen as Curse Mackey did an admirable job of doing vocals on the song. It was a very cool effect and the drums sounded great. Once the song ended, the screens were removed and the band got down to business, and that business covered a wide range of Pigface material, some songs from various members’ bands and a couple of quick breaks for Martin to speak to the crowd. Vocal duties were traded off between about a half-dozen members at any given time depending on the song and included Curse Mackey, Mary Byker, En Esch, Leslie Rankine, Franke Nardiello, Dirk Flanigan, and others. There was never less than two drummers at a time (Martin Atkins and Leanne Murray and they made quite a pair of percussionists), two bass players (one of which is bass master general Charles Levi), two or more guitarists, and other instruments like keyboards, extra drums, sitar, cello, etc.

Highlights of the set included a chilling rendition of “Chicksaw”, Pigface anthems, “Fuck It Up” and “Hips Tits Lips Power”, and a spine tingling and beautiful take on “Point Blank” by Gaelynn Lea that had Martin in tears and others in the audience as well. They played most of “the hits” and some songs were obviously chosen to cater to which musicians they had playing with them such as “Closer to Heaven” and a cover of TKK’s “A Daisy Chain 4 Satan” with Franke and they did a Gravity Kills song when they had the singer of that band up on stage with them. En Esch did his usual vocal duties with the Pigface songs he sang on as well as doing a version of “Godlike”.

The band never fully took a break and played for three hours before ended the night (and possibly the band) with an extended version of “Suck” which had the entire audience singing along with the band and Curse Mackey doing vocal duties from out in, and on top of, the crowd. It was a strong finish to a really fun performance. They certainly gave the crowd their money’s worth with that one.

While band retirements are often like retirements in professional wrestling, if this truly was the last we’ll ever see of Pigface it was a really fun send off and a great evening to reunite with the band and the fans that people will probably be talking about for years. 2016 was a really rough year for many people but at least there was finally something good that happened that people can look band fondly on.