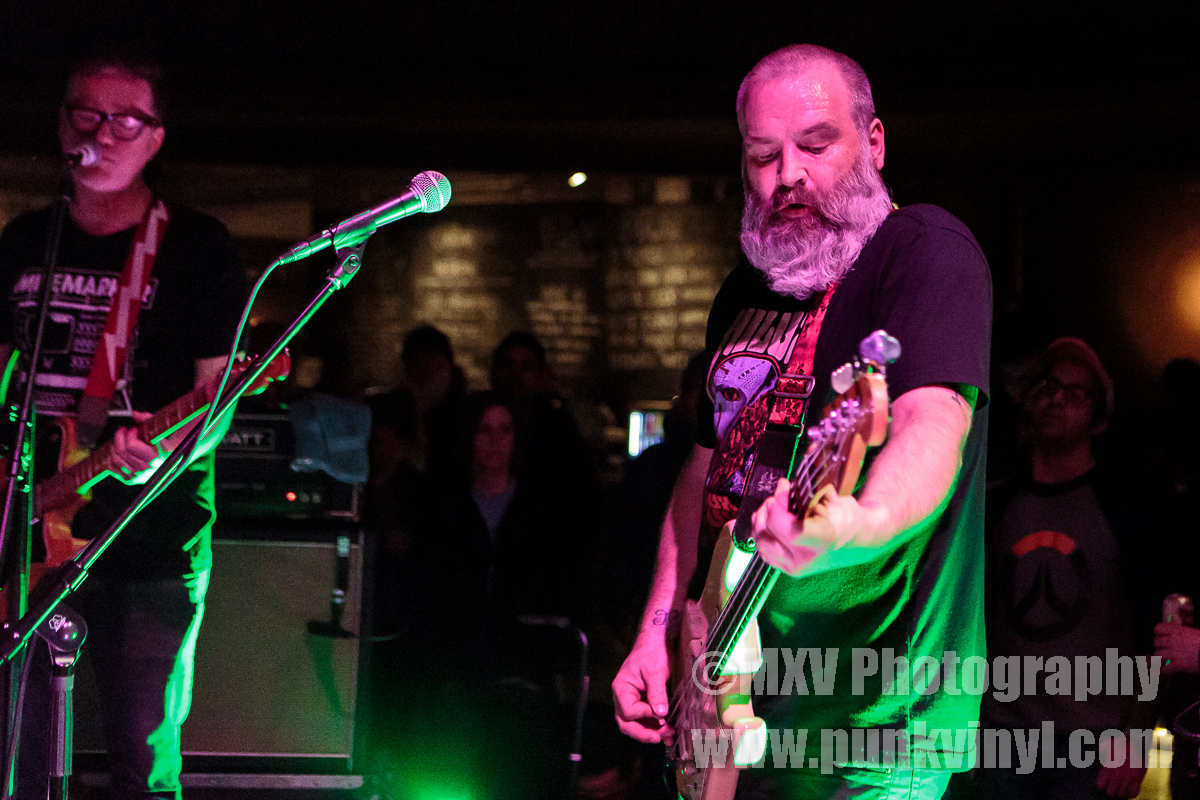 Saturday night was a very special night at Thalia Hall as it hosted a show by two bands that were among the best bands around during their time, both of whom broke up and have reunited at least sporadically in recent times. Shiner has done short reunion tours to support them reissuing their last three albums on vinyl, none of which had been released on the format before, and Milemarker did one better by not only reuniting, but putting out a brand new album that easily stands up against their amazing back catalog. Having either one of these bands play a show in your town is a treat but having the two play together is something special indeed!

What was strange when entering Thalia Hall last night was that instead of having the bands play on their large stage there was a platform set up in the middle of the room with all the bands’ equipment crammed on it. This makeshift stage was where all the band performed and they were surrounded by the audience. The result was the band members were on the outside edges of this platform facing in so the members all faced each other and not really the audience. Two sides of the stage had good profile views of the bands while two had you looking at their backs.

Fake Limbs played first. These Chicago natives played some high intensity noise rock. Loud guitars, pounding drums, fast tempo, aggression, and a vocalist that sang, shouted and wailed his head off while writhing around the small stage or marching through the audience. If these guys were around in the early 1990’s they’d have been a staple of the Amphetamine Reptile label and they reminded me of how great that era of noise rock was and since few are playing it today it sounded fresh and exciting like it did two decades ago when that style of music was flourishing. These guys are well worth seeing if you get a chance.

Until late last year, Milemarker had called it quits in 2005 after releasing a new album with a new lineup and doing one tour (and that was after the band imploded during a show and disbanded in 2003). The band reuniting in 2016 was a huge surprise and even better was the release of, Overseas, a brand new album with another new lineup (Dave Laney and Al Burian being the mainstays in the various lineups over the years) that was every bit as good as their amazing early 2000’s output (Frigid Forms Sell, Anaesthetic, and Satanic Versus), in fact it was one of the best releases of the year and such a treat for long-time fans.

Milemarker made the long journey from Germany to play a pair of shows with Shiner and this was one of them. The band opened with one of their strongest songs and one that has been used as an opener in the past, “New Lexicon”. They were on point and firing on all cylinders from the get-go and the great music, powerful presentation, flashing lights, and catchy keyboard lines, easily sucked in the entire audience and had them for the rest of the set as they played some old favorites and showcased some material from Overseas. New songs from that album such as, “Conditional Love” and “Untamed Ocean” sounded amazing in the live setting and cemented those songs into the upper echelon of Milemarker’s legacy which really speaks to the strength of them when you factor in that they played these songs alongside such classics as “Ant Architect”, “The Banner to the Sick”, and “Signal Froze”. Every song they played sounded great and the only criticism one can attempt to make of their performance last night was that they didn’t play longer. There’s that old adage, “always leave them wanting more” and they certainly did that. The band could have played another hour and no one would have complained. Hopefully the band will remain active at least part-time so we all get a chance to see them perform again in the future and this lineup of the band is a strong one that plays well together.

Shiner was the final band of the evening and they too did not disappoint. This particular run of reunion shows was in support of the band finally releasing their second (and best) album, Lula Divinia on vinyl. They did this with the drummer that played on that album reprising his percussion duties. The songs sounded great and the band played like a well-oiled machine that you’d think never stopped performing together. A real standout was the combo of “Sideways” and “Pinned” which they played together as one just like the album. “Pinned” was spine tingling.

When they completed that segment of material, they switched drummers to perform material from Starless and The Egg. The band had heavily showcased material from these albums on the previous reunion shows they did to promote their recent vinyl releases so it was no surprise that the band kicked all kinds of ass delivering these songs again. “The Truth About Cows”, “Pills”, “Giant’s Chair” and others had the crowd smiling, cheering, and some even banging their heads. After finishing that batch, they switched drummers back again to do a couple more from Lula Divinia plus one from Splay.

The band hinted in recent Facebook posts that this could be the last time they do any more shows. If that is the case they sure went out on a high note and will be missed. If it wasn’t and the band reunite again in the future (maybe they’ll reissue Splay on vinyl again since it is quite a rarity these days) they will definitely be welcomed back.

Having two unique and amazing bands play together again made for an amazing evening of music played by some very talented and sadly underrated musicians whose bands should be household names. It was well worth a late night venturing out on a cold winter night and those who missed it should be kicking themselves.