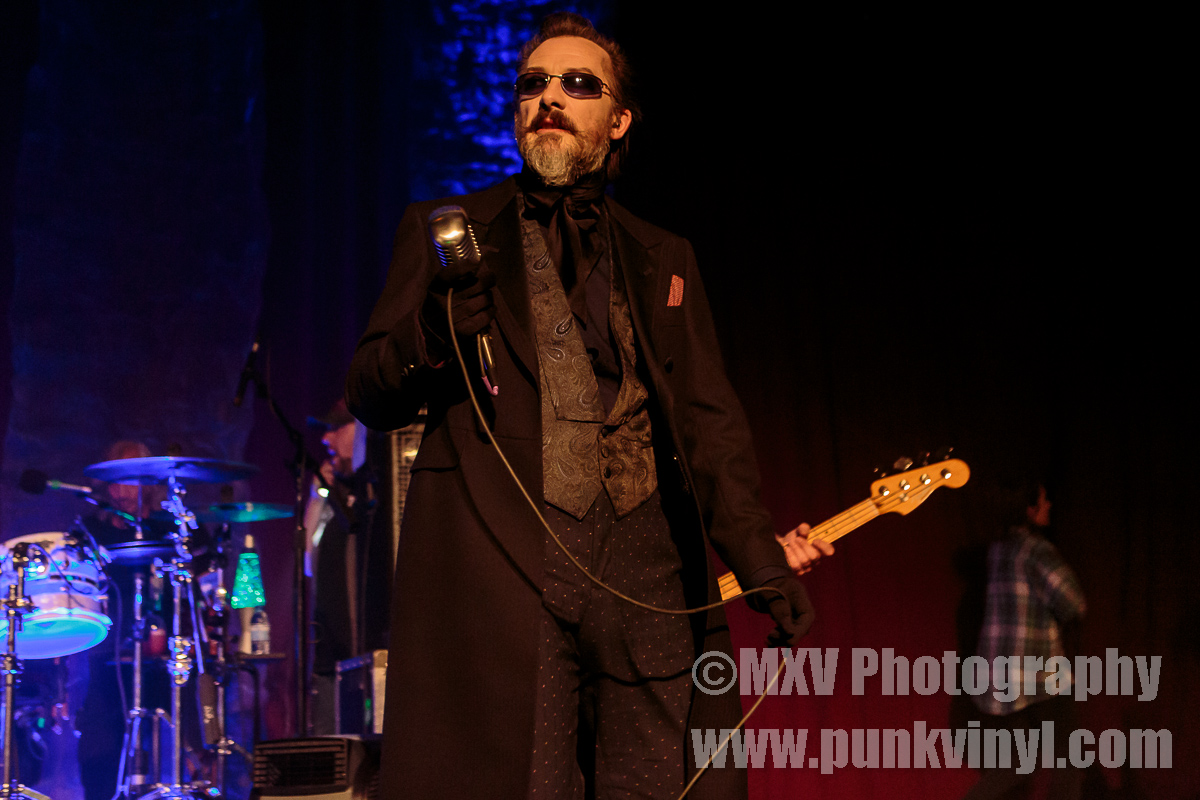 It is both amazing and a bit scary when you realize that The Damned are now in their fourth decade as a band. It’s amazing because that’s one hell of a long time and few bands make it anywhere near that long and scary to realize that it means not only are The Damned considered old men now but that means long time fans such as myself are also old! The Damned has aged like fine wine and they’ve been pretty active the past few years and have been putting on some of the best performances of their career lately and Sunday night was the proof as the band headlined the House of Blues in Chicago. A ton of people came out on a Sunday night to see these punk rock legends celebrate their 40th birthday and the place was packed solid.

First up was Bleached who hail from California. This band consisted of three females on bass/guitar/guitar and vocals and a male drummer. The lead singer (who also played guitar after the first song or two) had bleached blonde hair (which makes sense given the band’s name) and had a rather striking resemblance to Debbie Gibson from the 1980’s. She had a heck of a good singing voice too. The band mix punk and power-pop and if you can imagine if the Go-Go’s stayed more on the punk side instead of the more accessible pop direction they ended up with then that will give you a good idea of Bleached. They had catchy songs with some hooks and packed a good punch. Good energy throughout their entire set and everyone in the crowd seemed to be digging them. Their 45 or so minute seemed to go by in the blink of an eye and if that’s not the sign of a good performance than nothing is.

Somehow even more people squeezed into the club by the time The Damned took the stage and they were all super excited when Monty Oxymoron started noodling around on the keyboards before starting the play the familiar opening notes of “Melody Lee”. As he did this, Dave Vanian, Captian Sensible and the rest of the band took the stage and kicked it into high gear. Opening the show with one of the best songs off what is largely regarded as the band’s best album was really setting the bar high from the start and the band kept raising it with each successive song. They were full of energy, they played like a well-oiled machine, and the Captain entertained the crowd between songs with his usual wit. This evening he took every opportunity he could to poke fun at Mumford And Sons which never stopped being funny. Captain also informed the audience that he just turned 63 years old! The guy still has the energy and plays like he’s in his 20’s!

Dave Vanian was decked out in a black suit with slicked back hair and a beard and goatee and these days looks a little like a punk rock Vincent Price. Dave is quite the crooner and his voice was in fine form this evening as he took command of the stage. The band played many of their best songs from their best albums along with a few unexpected gems. The Damned staples like “Disco Man”, “Wait For The Blackout”, “New Rose”, “Neat Neat Neat”, and “Love Song” (played like the album version with the cool “Ladies and Gentlemen, How Do” intro) never sounded better. Surprises of the night included “Street Of Dreams” (which is pretty incredible live), “Generals”, “Jet Boy” (the Captain got to sing one!), and wait for it…. “Nasty”!!! That alone easily was worth the ticket price but there wasn’t a bad song in the entire set.

During “Ignite” the before reaching the apex of the song the band got the entire audience to sing along to an extended break of “oh whoa oh oh’s” before the song’s satisfying finish. “New Rose” had the crowd jumping up and down and going bananas and it no surprise that the crowd ate up every second of “Smash it Up” like it was candy.

After about an hour and 45 minutes and two encores, the band ended the night with a fine rendition of “Antipope” which has been a regular show closer for them in recent times. The crowd was all smiles as one of the first and one of the greatest punk rock bands in history left the stage and proved again that they may be getting older but they are still one of the best live acts you can see with an amazing catalog of songs. Here’s hoping we get another forty years of having The Damned in our lives.