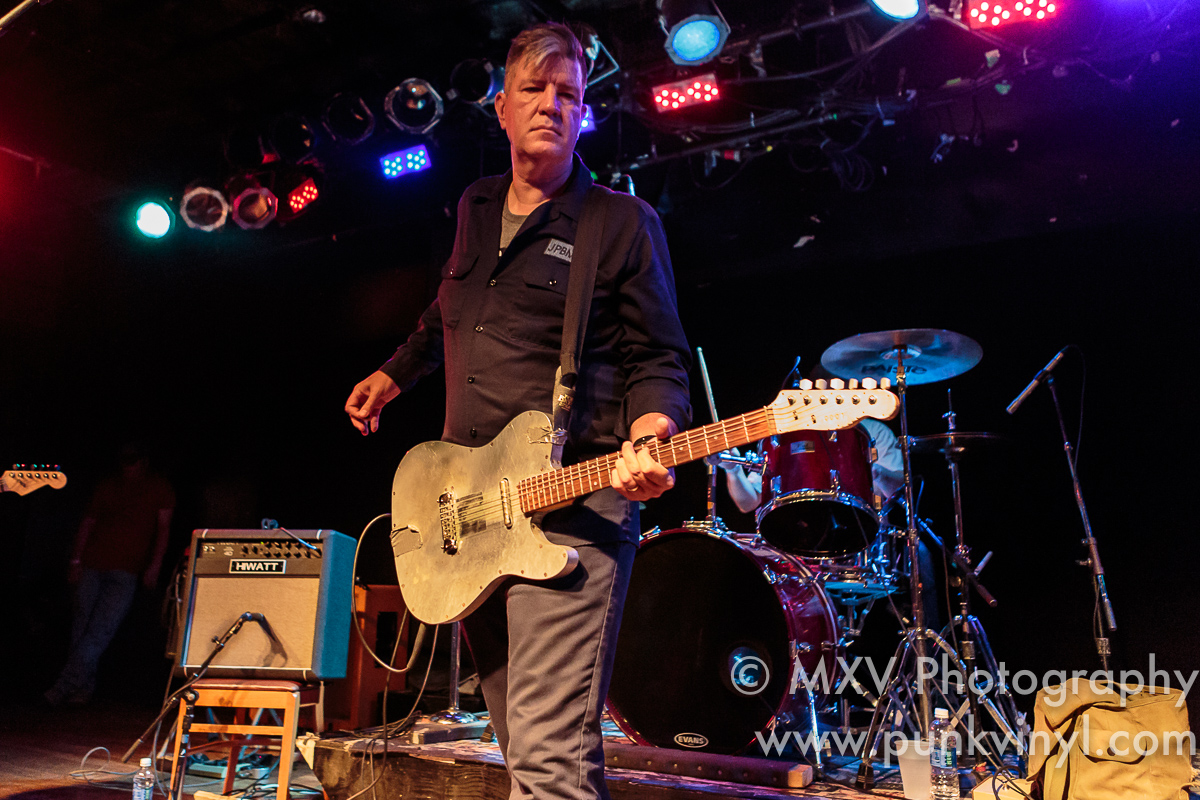 Remember when punk rock was meaningful and bands and people stood for a cause? Remember wanting to defy the system and stick it to the man? Remember the resentment towards the president? Well since the current president has probably already cemented himself as the most despised in American history in the shortest amount of time, what better time to have a show for a good cause? That’s exactly what All Tomorrow’s Impeachments was all about. Some old, great, bands reunited and were joined by some other bands to raise money for the ACLU and The Southern Poverty Law Center. It was great to see a bunch of like-minded individuals get together to try to do some good and what a nice lineup of bands it was!

Most bands played both nights with only a couple of exceptions. Shellac were supposed to play one of the nights but had to cancel after Steve Albini had a pretty gnarly bicycle accident that left him unable to perform (thankfully Steve’s injuries aren’t permanent and he should be back in action in the future). The highlight of the weekend was Chicago noise rock legends, Tar, reuniting to play both nights of the show. Another local band from the same era, Poster Children, who have been active the past year after a somewhat lengthy hiatus, also closed the show both evenings.

Nonagon were a three-piece band hailing from Chicago. They played a nice form of punk rock that reminded me a bit of the band, Crain. Loud, clangy guitars, two members sharing vocal duties, pounding drums, and mostly fast tempo. They were quite enjoyable and well worth checking out if their style of music is your cup of tea (and if you are a regular reader of this site it’s a safe bet it is).

Long running Chicago indie rock band, Dianogah, were a very nice addition to this show. They were around in the heyday of 90’s indie rock and have been mostly active ever since. They sounded great and seeing them was the start of what felt like a nice trip back in time to the “Lounge Ax years” where so many great indie rock bands seemed to play every weekend in a very exciting era for music.

Bear Claw were another local band and they brought a fair amount of noise. Their drummer also put this event together and did a very nice job on it. These guys were loud, noisy, packed a punch, and reminded me a bit of Hammerhead at times. They were pretty intense and fit right in with the overall sound of most of the bands on the bill.

Poison Arrows played on Saturday and feature someone who was in Don Caballero. They played intricate and somewhat complex songs with really interesting guitar parts coupled with sometimes hypnotic repetition. They were fantastic!

Tar played their last show in 1995 (at the legendary Lounge Ax) and since then have only played together one other time around five years ago. Having them reunite once again for this event was the biggest treat of the entire weekend. The band dusted off their aluminum guitars and once again delivered their blend of noisy indie rock with a guitar sound that just oozed that “Chicago sound”. Both nights their 45 minute set seemed to go by in the blink of an eye. Friday night they were a tad bit rusty but that didn’t detract whatsoever from the enjoyment. Saturday night they had shaken off all the rust and were playing as well as ever, in fact it was like no time had passed and it was 1995 all over again. They were absolutely worth the 22 year wait to see again and hopefully something will happen that will get them playing again at least occasionally. They definitely proved that they “still have it” that night.

Poster Children closed the show both nights. They have a ton of energy and played like a tight, well oiled machine. Somehow bassist, Rose Marshack, seemed to have not aged a day and not only looks the same as she did in the 90’s, but she didn’t hold still during the performance and had an amazing amount of energy. People would pay good money to have that kind of energy and if someone can point me to the fountain of youth she has clearly been drinking from please let me know! The band seemed to focus on newer material (though they did play “Dangerous Life” both nights from their first album) and the only bummer was that they didn’t play anything from Daisy Chain Reaction (easily their best record) either night. That aside, they are still a fantastic live band and have a lot of really good songs.

All Tomorrow’s Impeachments was a great way to spend a weekend at one of the better rock clubs in the city. Hopefully they were able to raise a good amount of money for the worthy causes.