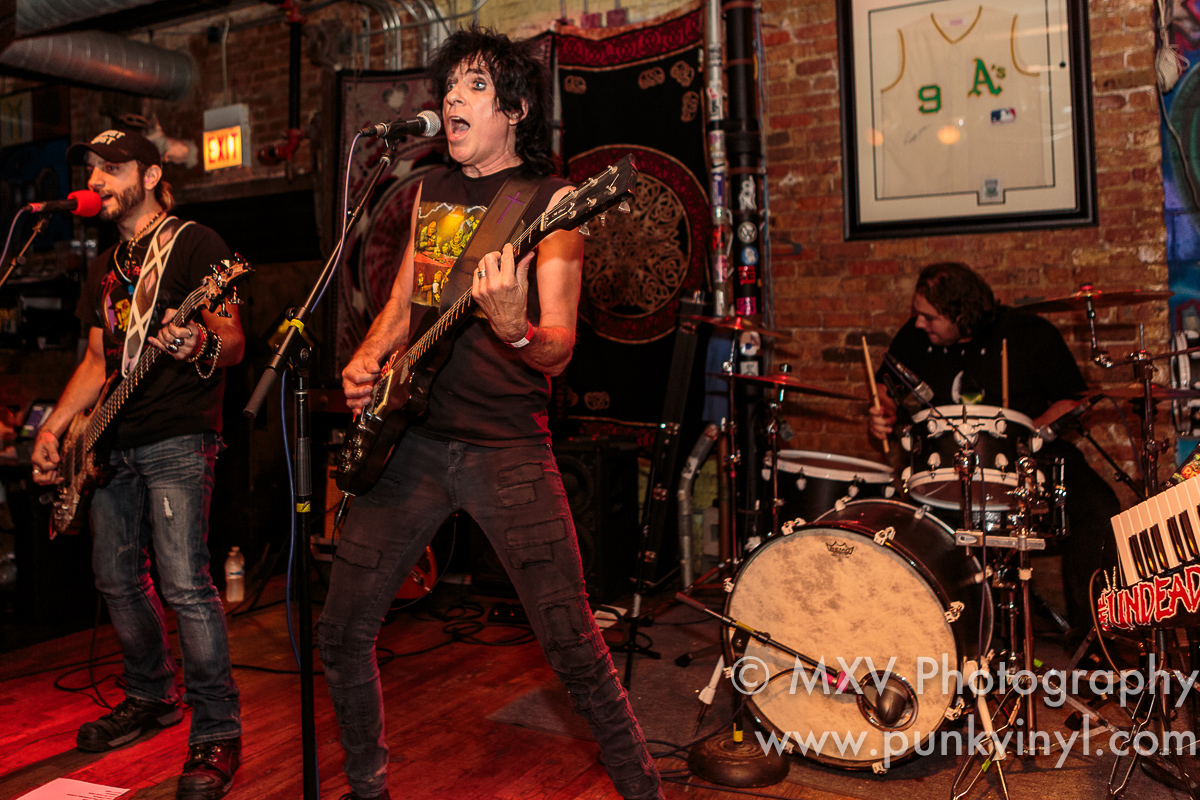 Saturday night was a very special night over at Reggies because it was the night that The Undead finally played in Chicago! It had been decades since Bobby Steele brought his band to the windy city and actually played an Undead show and it seemed like the day would never come but thankfully it did!

First up was Nonnie Parry. They were a three-piece band that played somewhat simplistic, mid-tempo, droning post-punk. The female lead singer had a monotone vocal style a little like Joy Division in its delivery. The bass player spent their entire set with his back to the audience starting down at his instrument and the drummer pounded away at his kit.

Next up was The Artist Formally Known as Vince Band (now that’s a mouthful!). These guys seemed to have come from a time machine from the beginning 70’s glitter/glam New York scene as they had a similar style to their music and in at least a couple members’ presentation. They were full of energy and had some really catchy songs. They also seemed to be having a blast on stage as they were constantly smiling and doing silly things to entertain themselves as much as the audience. If their influences weren’t readily apparent to the audience during their original songs, they played a trio of covers from New York Dolls, Dead Boys, and T. Rex. They were a lot of fun and I highly recommend seeing them play should you get the opportunity.

The Undead have been active in one form or another for more than three decades. It has also been about that long since former Misfit, Bobby Steele played in Chicago with a proper version of the Undead. What seemed would never happen finally became a realty last night when he and his band took the stage. They may not have been playing to a sold out crowd (the big boxing fight seemed to keep most people at home watching the overpriced PPV), those who were in attendance were big fans and very excited to see The Undead play.

The band opened their show with “In Eighty Four” which I think may have been the first Undead song I ever heard so you couldn’t ask for a better way to start than that. From there the band played a really great and diverse set of old Undead classics, more recent material, some brand new songs from a forthcoming EP, and a few Misfits covers (the only people who have any business playing Misfits songs are people who actually played in The Misfits and of course Bobby Steele did so these were not only perfectly acceptable, but good!). The new material had a bit of a surf style to the sound which was very interesting and enjoyable. The classic Undead songs sounded great and the addition of some keyboards and partial vocal duties on some of the songs by Bobby’s wife, Diana, breathed some new and interesting life into those already great tunes.

Bobby and the band really played their asses off and seemed to be enjoying themselves while doing so and the crowd were certainly into it as well. Between songs Bobby talked a bit and shared some information about various songs they played. The band he has assembled really seem to have good chemistry which made the songs sound as good as ever. Some of the classic Undead highlights included “A Life Of Our Own”, “Evening of Desire”, “Put Your Clothes Back On”, “I Want You Dead”, and “Undead”. Misfits songs were “Halloween”, “London Dungeon”, “Spook City USA”, and “Ratt Fink”.

The band played well over and hour and after what they said was going to be their last song, the audience immediately asked for more so they stayed on stage and played a couple additional songs. It was a great and fun set from start to finish and was absolutely worth all the years of waiting for The Undead to play here. Hopefully they will come back again sometime before too much time passes again because it is clear that Bobby Steele still has a lot to offer and plenty of gas left in his tank.