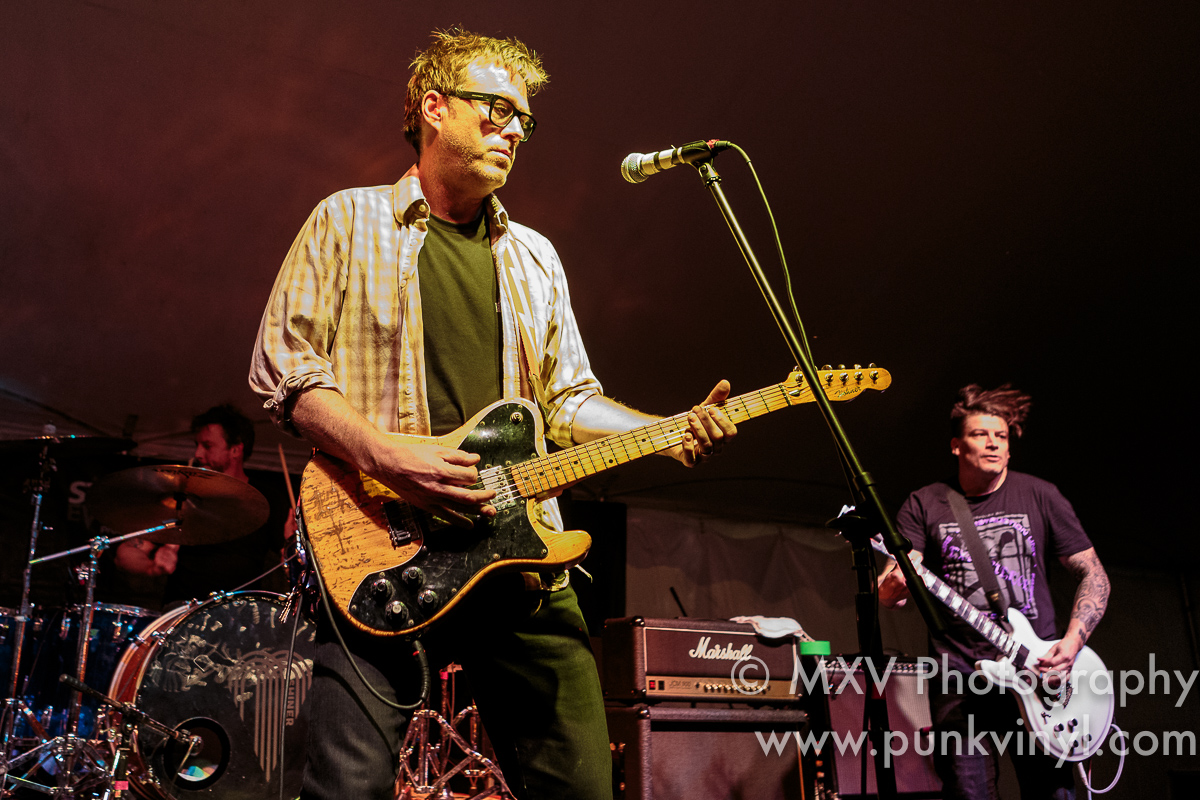 Those interested in the three B’s (Bands, Beers, and Bratwurst) here in Chicago must have felt like they hit the jackpot last weekend as the Wurst Music & Beer fest took place outside the big plumber’s union in the West Loop. The three-day event saw a whole slew of bands playing while food and beer vendors competed to see who had the best offerings. If you like to eat, drink, and listen to music (and play some games or just hang out) then this was the place to be! Admission for the entire weekend was cheaper than seeing a show at the larger clubs around town and the food and drinks were also fairly priced, top that off with a weekend of beautiful weather and it was a big win all around.

Sincere Engineer is a one-woman, acoustic punk act and was hugely entertaining. This young lady has quite a strong voice that mixes some nice melody with a little punk rock sneer. She does this while strumming away on an acoustic guitar and she was smiling much of the time she was doing it. Her songs have a catchiness about them that you will find yourself thinking about hours after hearing them. She played a fairly short set that definitely left you wanting more.

Bad Mechanics was a two-piece band that consisted of a guitar player and a singer. The bass and drums were handled by a laptop they had set up on the stage. They were like a punk rock comedy act playing goofy songs that were amusing in short doses but a full set of it grew tiresome after a few songs. They’d be a good singles band but a full LP of them is too much to ingest in one session. Their song about the mineral water was pretty damn amusing though.

Sonny Falls was a very entertaining indie rock band with a loud guitar sound that reminded me a bit of Dinosaur Jr. Their songs packed a nice punch and there wasn’t a bad song in the bunch.

Speed Babes were a fast paced, raw, garage punk band. They had short and loud blasts of songs with somewhat distorted vocals, fast tempo and plenty of attitude. They were great and well worth checking out. Well done, Speed Babes!

Kali Masi were a more modern band that mixed a bit of punk with a lot of melodic pop style hooks. They were a bit more like the sort of pop-punk you’d find on Fat Wreck Chords. Their songs were pretty catchy and they certainly had an appeal for the younger generation in attendance. Overall they were pretty entertaining.

The best band of the day, Shiner, played next. It is pretty rare that Shiner plays a show these days. They disbanded a long time ago but have done short reunion stints each time they reissued one of their four amazing albums. These guys had a flawless discography, something few bands can lay claim to, yet for some reason they didn’t become anywhere near as popular as many of their peers. It’s a shame but those familiar with the band know just what a fantastic band they are and any chance to see them play these days is a real treat. The band opened their set with their best song, “The Truth About Cows”. That alone was worth showing up for. The sound was a little odd for their set and the vocals weren’t that easy to hear, but they played great nonetheless. They played a nice selection of tracks from Starless, The Egg, and Lula Divinia, all of them great, but sadly they didn’t dust off “Fetch a Switch” from their first album, nor did they play anything else from it. That’s a small complaint when you take into account that the band doesn’t have a bad song in their entire recorded output so there’s no way they can play them all. Hopefully Shiner plays out a little more before they hang it up again and once again retire the band because they will be sorely missed again once they are gone.

The Anniversary closed the show with about an hour-long set of emo style pop music. They had a smoke machine and some nice colored lights on stage to spruce things up a bit. If you are into that style of music then you’d have found them to be hugely entertaining and the band seemed to be having a lot of fun performing on stage and seemed to really be enjoying playing together, something they hadn’t done for many years until recently.

Wurst Fest was a really enjoyable way to spend a day (or a couple of days for those that spent the weekend there). Hopefully this event becomes a yearly staple in Chicago as it was off to a very good start!