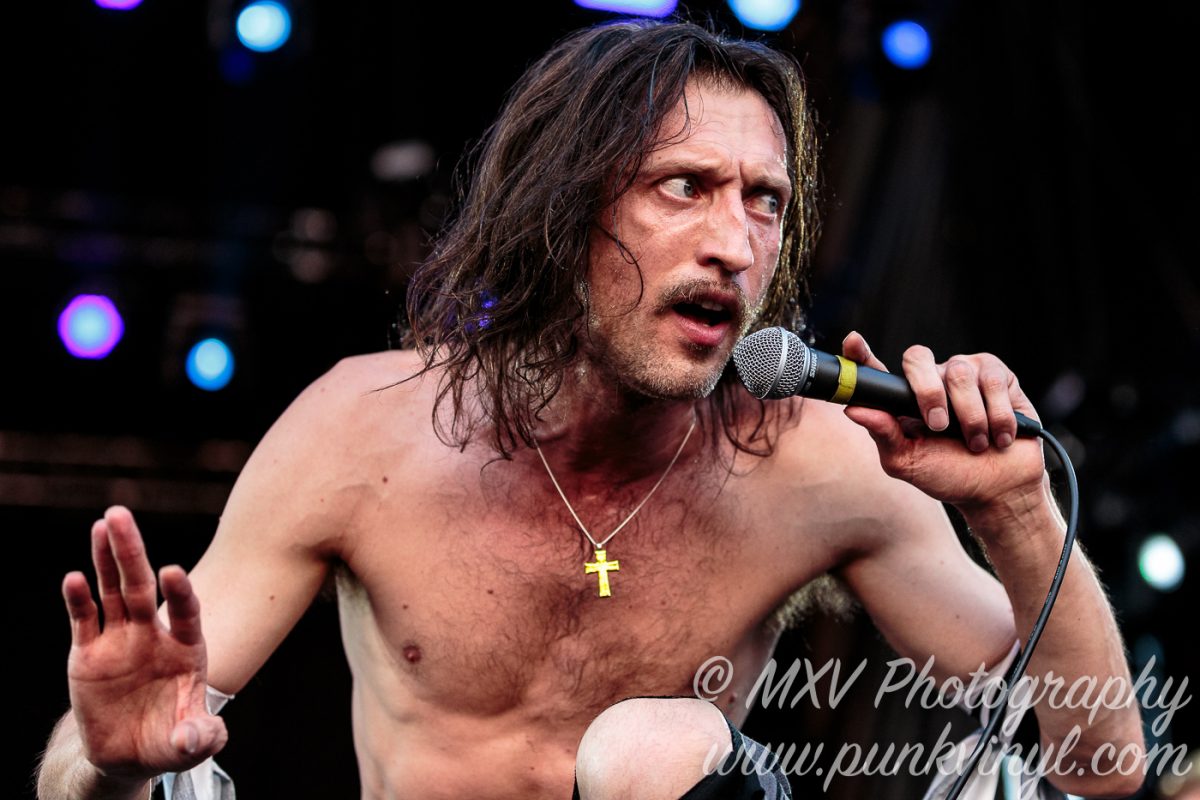 It was another beautiful day in Chicago for the second day of Riot Fest and the lineup was every bit as action packed as the previous day. By later in the day the crowd easily doubled in size from the day before and people were in every direction as far as the eye can see partaking in all the music, fun, and food options.

The day got off to an early start with another old punk rock band from the U.K. and that was G.B.H.. These guys have been around for more than three decades and they continue to regularly tour and release new music. What hasn’t changed is their sound, they are still the metal-edged hardcore that we know and love and age hasn’t slowed them down one bit. They sound every bit as energetic and powerful now as they did back when they were churning out their classic singles and the City Baby records. Fast, tight, and non-stop, as any hardcore band should be.

Fishbone celebrated their third Riot Fest appearance by playing their entire Truth and Soul album. They played to a huge crowd and it was pretty clear that this album was a favorite among most of the audience as they danced along to the band’s excellent punk/rock/ska/funk fusion. These guys really deserve to be a household name and it’s a real shame they didn’t become as massive a band as many of the bands they influenced over the years. The band sounded excellent, and their lead singer, Angelo, is one of the more charismatic frontmen in rock and roll. Their set was like one big party and hopefully they will return to future Riot Fests as it’s a safe bet they’d always be welcomed by everyone.

Peaches made her Riot Fest début next and proceeded to put on one of the best and most interesting performances of the entire weekend. She’s a one-woman electronic music show who played some catchy dance songs about her vagina, gender identity, sex, vaginas, dicks, vaginas, and did I mention vaginas? She began her set decked out in a pink furry suit with a vagina hat and was soon joined by two dancing vaginas. This review will probably get a lot of SEO action from people looking for porn sites due to the sheer number of times the word vagina was used. Peaches commanded attention as she danced around the stage, posed, and really got the crowd going. Peaches and her dancing companions shed much of their clothes throughout their set. It was quite a spectacle and the music was so catchy it was impossible not to start moving your feet and shaking your ass. In many ways, Peaches was more punk rock than the punk rock bands on the bill!

What happens when Mike Patton from Faith No More, Dave Lombardo from Slayer, Justin Pearson from The Locust, and Mike Crain from Retox decide to hang out together? You get Dead Cross! Dead Cross is the “supergroup” formed by these four gentlemen and they sound nothing like any of the bands they all came from. They played fast, shrieking, loud hardcore/metal songs that mixed hardcore, grind, early screamo, and death metal, all into short little blasts. It was often hard to tell if Mike Patton was actually shrieking any lyrics or just making noises with his mouth but either way his vocals sounded like another instrument of sonic destruction as these guy pummeled the audience with short, intense blasts. Justin Pearson was also sporting a clear bass, the second one of the festival!

The last time the Bad Brains played a Riot Fest it was one of the first few back when it was being held at the Congress Theater and that performance still stands as the worst performance in Riot Fest history. It was god awful. The fear was that we’d get a repeat of that one again this year. Thankfully we didn’t. Just like the previous time, the musical section of the band sounded as good as ever. These guys are some of the best musicians in all of punk and rock music. The great unknown was if H.R. was going to actually make an attempt at singing the songs or would he just mumble them again. While we got a more subdued H.R. than he became famous for, he actually sang all the songs and put forth at least half the effort. He still mostly stood there and didn’t move much at all, but his voice sounded pretty good and he at least made some effort. Honestly at this stage in the band members lives as they are pushing retirement age, plus with H.R. having surgery along with Dr. Know nearly dying, it was amazing that not only were the band all there playing together, but they were even able to do it at the level they did on Saturday. They played a nice mix of their classics, some later material, and the obligatory reggae numbers. They had a second guitarist who was a fairly young kid, perhaps the son of one of the band members? Musically they sounded great and while the vocals weren’t overly enthusiastic in their delivery, there were some moments here and there where H.R. nailed it, especially in the slower numbers. They may not have actually made up for their previous Riot Fest outing, but they sure left a lot of people happy on this day and the fact that in 2017 we got to see a functioning Bad Brains with all four members still alive and playing together was a very nice thing.

Every person under the age of 30 packed into the stage area where The Lawrence Arms was playing and they went completely nuts from the opening chord. This Chicago based trio played energetic, anthemic, pop-punk with plenty of sing along parts, and boy did the audience sing along. These guys put on a performance worthy of a headlining act and the kids ate it up like candy and begged for more.

Another semi-regular Riot Fest attraction, Gogol Bordello, easily topped all their previous appearances combined with an amazing set of their “gypsy punk” music that combines so many styles of music into one that they pretty much invented a new sound. They have this uncanny ability to connect immediately with an audience and get them so amped up that they go insane. There was dancing everywhere, people climbing all over each other, people screaming, and lots of singing along. They brought the Riot to Riot Fest for sure and damn near stole the show with how good they were. It’s impossible not to get sucked into liking them even if you only witness them play a couple of songs. It’s a pretty safe bet that they’ll be gracing another Riot Fest stage in the not too distant future I’m sure.