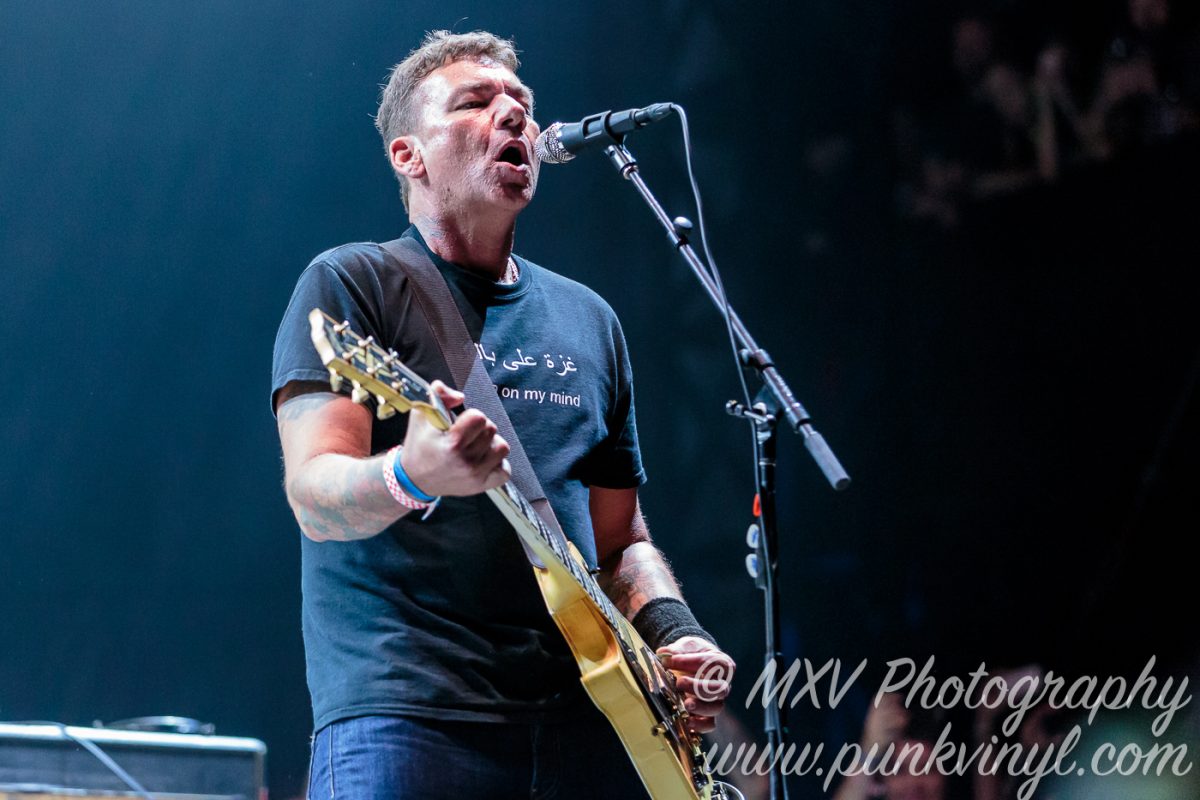 For many, the final day of Riot Fest was the one they were most excited about because once again, Riot Mike did the impossible and got a band that was so important to so many people back together when no one thought it could or would ever happen. This year that band was Jawbreaker! There was a threat of rain in the forecast that day but thankfully it didn’t happen and it ended up being another beautiful warm day to enjoy some really great music.

The Mighty Mighty Bosstones are no strangers to Riot Fest, they’ve played the fest on multiple occasions, and they were no strangers to the huge crowd of punk rock fans both old and young that came to watch them play. This year the band performed their album, Let’s Face It, in its entirety. If you lived through the 1990s you’d recognize their alternative rock hit, “The Impression That I Get”, which was on that album and helped propel it to be their biggest seller. The band informed us that the album turned 20 years old this year. 20 years already?! Where does the time go?! The band was in great spirits and were smiling and dancing about the stage and they played. The crowd loved it too and a lot of people were singing along. Overall they were a lot of fun and they sounded great.

Local emo band, Cap’n Jazz, was next. They recently reunited and this was the second show they’ve played this year and who knew that they were so popular?! The amount of people who packed into see them was insane and the went bonkers the minute the band started playing. These people, many of them fairly young, knew all the words to the songs and shouted along as the band belted out one song after the next while their singer climbed up on top of any piece of equipment that would hold him and even dove out into the crowd to sing while crowd surfing. They were quite good and apparently quite legendary in some circles judging by the reception. I may not have been aware of their popularity going into their set, but the certainly won me over with this intense performance.

Pennywise is a staple of pretty much any festival that hosts punk rock bands, they’ve played them all, including previous Riot Fests. They always are entertaining and get the kids going crazy and this was no exception. They played their usual set of pop punk hits and closed their set with their infamous, “Bro Hymn”. If you are familiar with them and a fan, you knew what to expect and they delivered exactly that. The kids kept the security staff busy with all the crowd surfing and flying bodies.

Next up was Dinosaur Jr. If you grew up on a steady diet of SST and Sub Pop records (and who didn’t?) then this band is likely well-loved by you. This year they opened with their cover of The Cure’s, “Just Like Heaven” and played one other song before playing their, You’re Living All Over Me album, which was probably their most popular one. Many people feel it was their best album and it certainly ranks way up on the list in their impressive discography. They sounded great and you may not have known this based on your vantage point but hidden behind them was a second guitarist and a second drummer to fill out their sound and give them some extra “oomph” for such a large outdoor stage. Cheating aside (if you could call that cheating), they were fantastic.

Prophets Of Rage is a new supergroup that featured all the members of Rage Against The Machine (sans their singer), along with Chuck D. of Public Enemy and B. Real of Cypress Hill.  They had a serious presence about them as they played behind a veil of darkness and the occasional flashing light (every photographers nightmare). Their set consisted of some original material along with renditions of Public Enemy, Rage Against the Machine, and Cypress Hill songs (as you’d expect). Their newly released album seems to be getting some lackluster reviews but live they were a total powerhouse. The crowd went completely insane and it is a small miracle that no one was seriously injured in that pit. This new band was far more intense and entertaining than when Rage Against The Machine formed Audioslave after their singer left the band again and I bet this one sticks around a lot longer. As a live act they are a must-see if you are a fan of any number of the bands these members came from.

That just left the moment that most everyone had been waiting all weekend for, the return of Jawbreaker. That band meant so much to so many people (myself included) that seeing them one more time (or one time if you never saw them in the past) was a dream that most people didn’t think would ever come true.  In the 21 years that the band has been broken up, they became a thing of legend and people who weren’t even born at the time or were too young to have heard of them, let alone see them play, have fallen in love with them. The band became infinitely more popular over the past two decades than they were when they were active, much like the Misfits did except Jawbreaker didn’t become huge because Metallica wore their t-shirts and covered their songs. Their amazing music and lyrics that hit home did that.

There was a crowd that started packed into the front of the barricade by the stage and extended all the way to the back fences. It had to be easily 3/4 of the entire crowd for the day packed into this one stage to see Jawbreaker play. They opened with “Boxcar” and it instantly felt right. The band really did sound like they hadn’t stopped playing and there certainly wasn’t any signs of rust at all. While Blake was handling his vocal duties and playing guitar, any time you glimpsed over at Adam or Chris, they seemed to be smiling. The band was finally getting the recognition they always deserved and they even seemed a little shocked by the massive turnout and amazingly warm response they received.

“Sluttering (May 4th) was next and then was followed by “Want”, the only song from Unfun they played, and that one really seemed to surprise everyone and it sounded great. A pair from 24 Hour Revenge Therapy followed in the form of “The Boat Dreams From the Hill” and “West Bay Invitational”. From there they were pretty heavy-handed with amount of material they played from Dear You but every song they played from it sounded so much better than they do on that album. They threw in “Parabola” and “Condition Oakland” in the mix and even busted out “Kiss the Bottle” which was only on a compilation and one of their best songs from their final years. After a little over an hour, the band closed their set with the epic, “Bivouac” and it was chill inducing in its delivery. The hour and 15 minutes they played seemed to go by in the blink of an eye, leaving one to wonder “is this real, did this just happen?”. It was real and it was spectacular. While the future, if any, of Jawbreaker is uncertain, if they just chose to be “one and done”, this was a hell of a way to go out, playing to a massive sized crowd. I think I can safely speak for the entire world of Jawbreaker fans in saying that if they choose to continue then a lot of people are going to be really happy. Either way, the post-show high of seeing Jawbreaker one more time has yet to wear off three days later.

Another successful Riot Fest is in the books and now the post-fest depression and the long wait through what will feel like an even longer winter will begin. The fest was on hell of a great way to close the door on summer and will likely be talked about for many months to come. Kudos to the Riot Fest staff for another job well done.