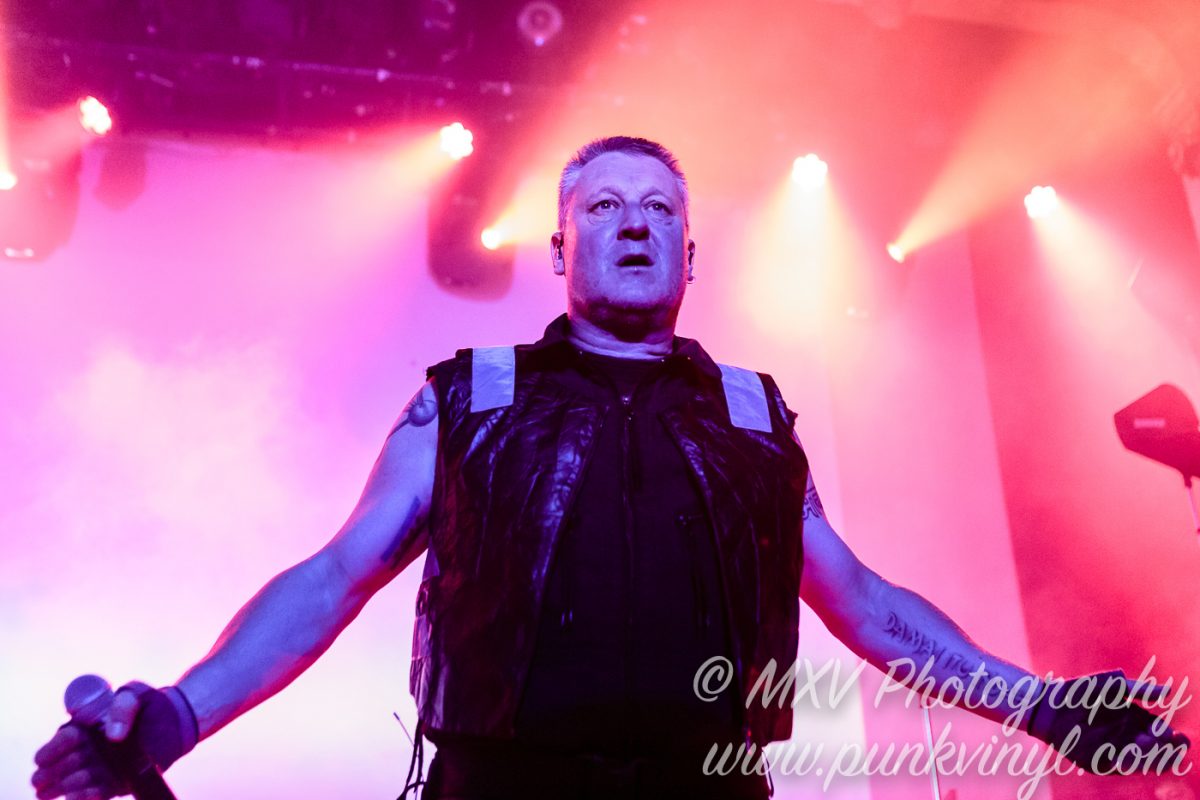 Chicago is pretty much the industrial music capital of the world. Sure the music style may have been invented elsewhere but in Chicago is where it really grew and the Wax Trax label helped propel it to international attention.The time period between the mid 1980’s and the mid 1990’s was a hotbed for industrial and one of the biggest band, and their many offshoots, was based out of here with Ministry. We had plenty of others too. It seems very fitting that there would be a yearly industrial music festival, it is just unfortunate that it took the untimely passing of one of the scene’s musicians to be the catalyst for such a thing to happen.

The Cold Waves festival began in 2012 as a memorial concert for Jamie Duffy, a local industrial musician and sound man who sadly took his own life after suffering from depression. The first event was a joint effort to both raise money for Jamie’s family, and raise awareness of suicide prevention and depression. It was, and continues to be a very important cause that hits so close to home for many people, especially here in the Chicago music scene. The festival became a yearly event, taking place every September, and this year was the biggest, most ambitious, and most well-attended one yet. It had a stellar lineup of bands both old and new. The event was sold out for the entire weekend and the people were packing to the ceiling inside the Metro, one of the longest running venues of its kind in Chicago and a place that was a huge part of the heyday of industrial music in Chicago.

Malekko is a new project that featured two beloved veterans of the industrial scene, Paul Barker and Chris Connelly. You may recognize these gentlemen from being in a little band called Ministry, or perhaps you may know them from the Revolting Cocks. Whenever these guys get together to make music, magic happens. This new project breaks some new ground for these guys compared to their past works. The songs were slow and droning mostly ambient noisy soundscapes with Chris’ vocals being heavily processed with reverb and delay. Post-punk meets ambient meets industrial. Very experimental stuff here and it was cool to see them branching out in new directions outside their “comfort zone” of the style of music of their previous bands. It’s always a treat to see these fine musicians perform in any capacity and this was no different.

Statiqbloom was a two-piece outfit that had a very old-school industrial sound to them. Think back to the heyday of bands like Skinny Puppy, Ministry, Frontline Assembly, and the like and these guys would fit right in with them. Had these guys been around back then it would be a safe bet they’d have released on the Wax Trax label. Powerful percussion, great beats, lots of layers of sound and growling processed vocals hit all the taste buds for fans of this type of sound.

Assemblage 23 was another two piece band. These guys were an industrial dance band that was way more accessible than the bands that preceded them that night and they really got the crowd moving and dancing about. Their songs were pretty catchy and they delivered an enjoyable set.

Long time industrial dance mainstays, Severed Heads, were next. This duo was positioned behind a table on the side of the stage that was full of gear and a pair of laptops. Tom Ellard and Stewart Lawler twiddled knobs, talked to each other, and manipulated sounds as film clips were displayed behind them on the huge curtain backdrop. They played a mix of various material that was reworked for their live performance and Tom Ellard occasionally sang vocals. Their music was very dance oriented and while the two men playing the music may not be exciting to watch as they mostly just stood there, their music sure sounded great.

Front 242 are legends in the industrial music scene and one of the top-level bands who have also been around longer than most. It was no surprise that they’d be headlining one night of this fest when Chicago was like a second home to them. 242 called Wax Trax Records their North American home label for many years before eventually singing to Epic Records in the middle part of the 1990’s. They are a favorite among pretty much everyone even remotely interested in industrial music. What’s amazing is three decades later not only does the band still sound amazing, but the two front men still dance and move around like they are in their twenties. How these guys, who have to be well into their 50’s or older, have the energy to dance NON-STOP for a 70+ minute set will go down as one of life’s great mysteries. It is awe-inspiring and exhausting to watch these guys move around like they do. The energy level is off the charts and it is infectious too as the crowd followed suit and danced their asses off.

242 played a solid set of many older tracks from their “Wax Trax years”, 17 tracks in all. Oddly absent was anything off their major label début, which was a solid album, but that is a small gripe when you got such dance floor hits like “Welcome to Paradise”, “U-Men”,  “Headhunter”, “Don’t Crash”, “Funkahdafi” and tons more! It was like we were sent in a time machine back to around 1991 and it was awesome!

When the lights came up and it was time to exit the Metro for the evening, six hours of music took place to a packed house. It was a great celebration of great music and a great, long running tribute to one of our own and there was more great stuff to come the next evening!