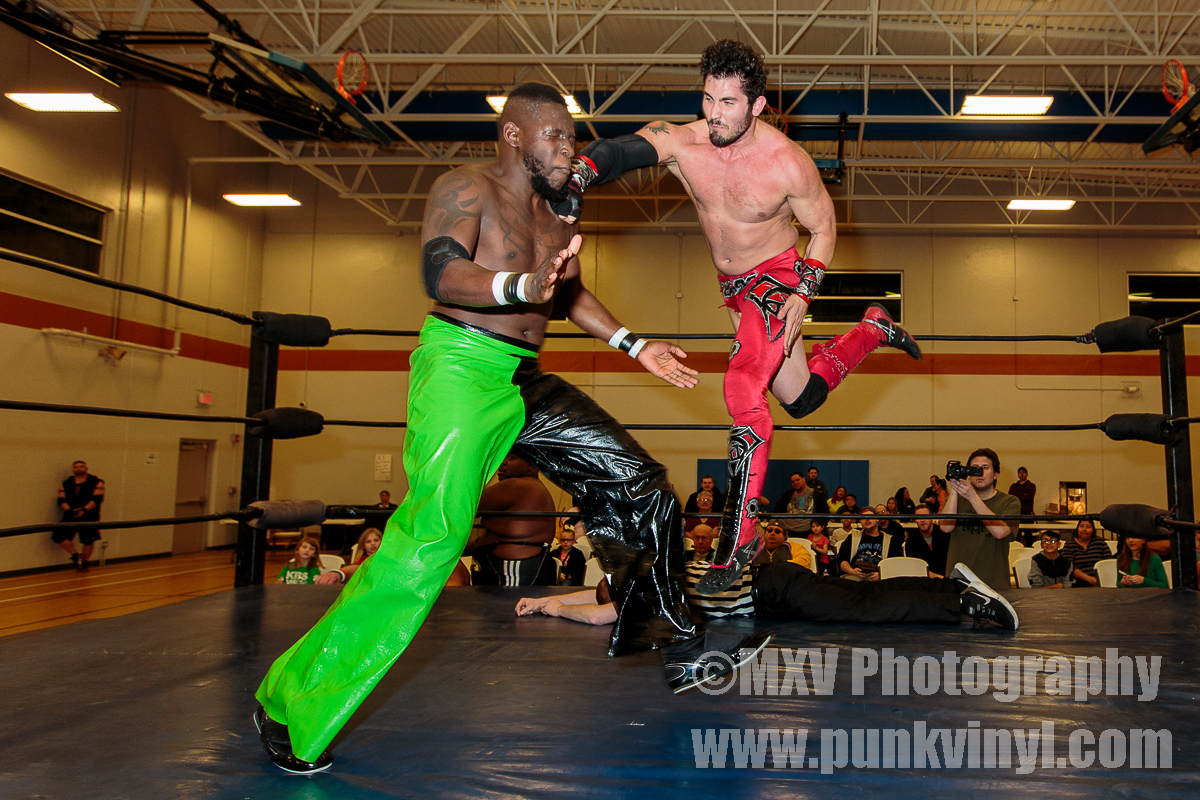 Resistance Pro returned to the Spark Recreation Center in Summit on Saturday for their latest event, Power Play. This show featured some of the RPro regulars as well as some new faces and one fairly new member of the roster became the breakout star of the evening by the end of the show.

First up was Cody Jones taking on newcomer, Daniel Winchester. These guys put together a really exciting match to open the show and the crowd was really into it. Winchester really looked impressive as he went hold for hold and move for move with Jones and looked strong. In the end, a well-timed brain buster was the key to Cody Jones getting the win. The crowd was bummed that the heel won but really enjoyed the match. Don’t be surprised if you see Winchester return to Rpro in the near future after this strong showing.

Lately it seems that Paloma Starr just can’t catch a break. She’ll be doing well in a match and then something will get wrong or her opponent will cheat and screw her out of a victory and it happened once again in the second match as she wrestled Rudy. Paloma was kicking ass until Rudy grabbed some hairspray and sprayed it in Paloma’s eyes when the referee had his back turned and blinded her which made her an easy target for Rudy to get a pin.

Daniel Eads faced Jungle Boy in the third match. Jungle Boy is the son of famous 90210 star, Luke Perry and he was making his midwest début in this match. This was the match that stole the show as two talented babyfaces put it all on the line to see who the better man was. Cobra and Willie Richardson came to ringside and did guest commentary during the match. This match was fast paced and exciting with lots of back and forth action. It was too close to try to guess who was going to win and that’s when Cobra decided to hop up on the apron and get in Daniel Eads face. The distraction was enough that Jungle Boy was able to hit an impressive looking roll up on Eads and get the three count. This was Eads best work so far in RPro and Jungle Boy left one hell of a big impression on everyone and hopefully he’ll be back in an RPro ring soon as he’d be a welcome addition to the roster for sure.

The newly formed alliance of Yabo and Mojo McQueen faced Hot Fire and Holy Water in a tag team match. Yabo is clearly under the mind control of Mojo who was barking orders at him throughout the match. When Yabo wouldn’t obey, Mojo would start stretching a voodoo doll he has that looks like Yabo and Yabo was wincing in pain while this was happening. The team of Yabo and Mojo together are quickly becoming an unstoppable force and they made fairly easy work of their opponents this evening. After the match, Mojo grabbed the mic and issued a challenge to Main Street Youth and said they are coming for the tag titles and will destroy everyone in their path until they attain their goal.

Hardcore Heather Owens and Amazing Maria had themselves a street fight where fall counted anywhere in the next match. They fought all over the venue hitting each other with everything they could find, including chips from the concession stand! The crowd left their seats and followed them everywhere they went. It was a fun match that found the ladies back in the ring for the finish where Heather nailed Maria with a stunner and got the win. The crowd was clearly behind Heather during the match and she got a big round of applause at the end.

Suge D was supposed to team up with Sean Mulligan to face the Cobra Dynasty in the main event but when Sean Mulligan came to the ring, Cobra informed him that Suge D had “a little accident” and wasn’t going to be there. Mulligan didn’t let it bother him much as he said he already found himself a suitable replacement and introduced Daniel Eads. Eads came to the ring to participate for a second time this show and made a great partner for Mulligan. These guys tore the roof off the place and Eads came out of the match looking like a main event superstar. Eads and Mulligan were poised to win when the ref was knocked out by a kick by Eads that was meant for Cobra. When the ref went down, Willie grabbed the heavyweight title belt and was getting ready to use it as a weapon when Tommy Else came to the ring. Tommy grabbed the belt and told him he wasn’t going to let that happen. Willie and Cobra backed to a corner and then Tommy turned around and clocked Eads with the belt. Tommy and the Cobra Dynasty then started putting the boots to Mulligan and Eads and gave them a beating before leaving the ring together. Tommy Else turned on everyone and joined the Cobra Dynasty. The match was ruled a no contest and the now larger Cobra Dynasty left the arena proud of what they’d done.

Power Play was an excellent show with a surprise ending. Resistance Pro once again hit a home run!