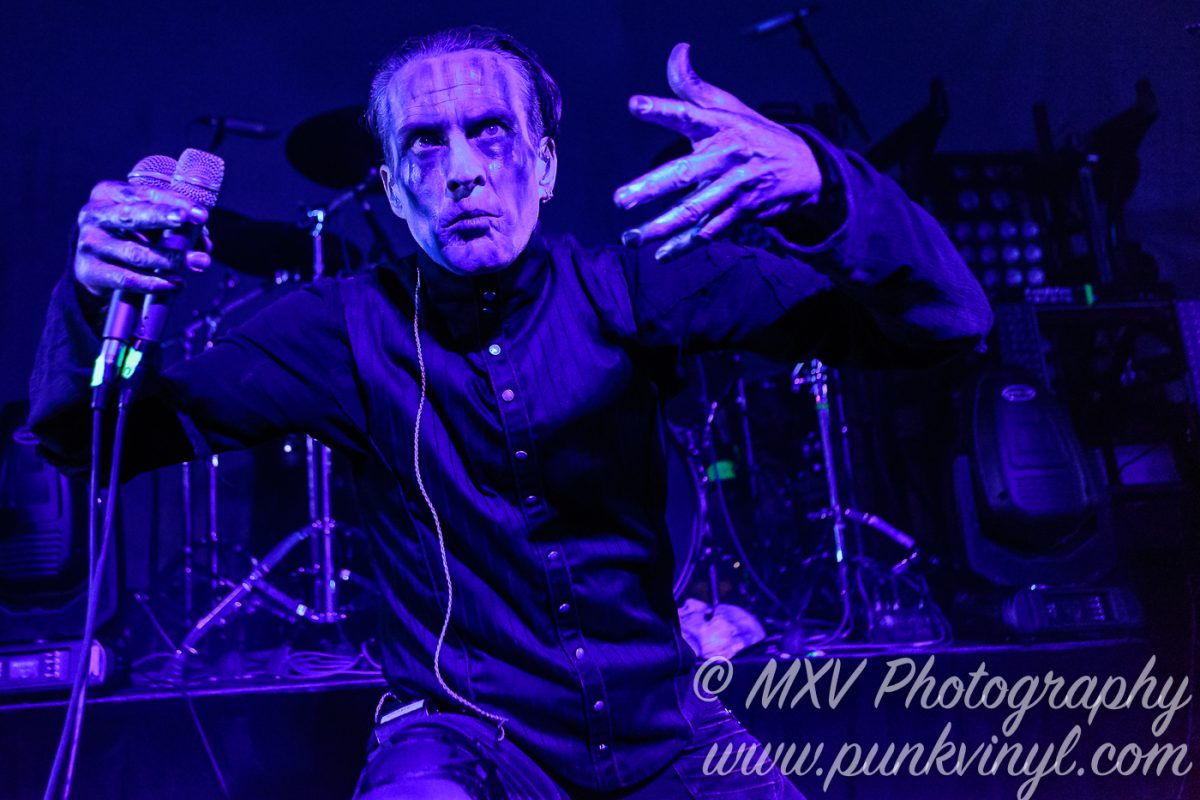 Sunday night was the final night for sixth Cold Waves festival over at Metro and boy did they go out with a bang. The night was capped off with a one-two punch of Ohgr (that’s Ogre from Skinny Puppy’s solo project for those who may not know) and KMFDM. Either one of those two acts would be a headlining show at a place like Metro, having them together along with some other great bands was even better. It was once again a sold out crowd.

Sanford Parker was a one man “band”. He stood in front of a table of equipment in near darkness and played a half hour of churning noise. He banged his head up and down the entire time as he manipulated his equipment to produced lots of low rumbles and punishing sounds.

Cyanotic are a Chicago based band who mix heavy industrial rock with a bit of the industrial dance and drum and bass sounds. On top of that their singer belts out low, rumbling, guttural growling vocals. High quality, mechanized, metal machine music. It was a solid performance.

Boy Harsher was a two-piece male/female combo that mixed post punk with some electronic dance and industrial dance elements and mixed in some more experimental and ambience for good measure. They were very unique and quite interesting. The female lead singer had a great voice as well.

Italian industrial mainstays, Pankow, were up next. These guys once called Wax Trax Records their American home label back in the label’s prime. The current incarnation of Pankow features a different vocalist than the one from the past, but if it wasn’t for the fact that he looks too young to have played on those early records, you’d probably never know he was new as their sound hasn’t really changed at all. They played a great set of their hard-edged industrial tunes and how could you not start moving you ass when the band plays such fun songs as “Me and My Ding Dong” and “Gimme More”. Great stuff!

Ohgr was next and somehow the crowd seemed to double in size. Everyone was very excited to see the beloved front man from Skinny Puppy and this was a very welcomed and exciting addition to the Cold Waves Festival. Ohgr had a similar live band setup as the last time he toured including two familiar faces from recent touring editions of Skinny Puppy. When the band started, Ogre came out wearing a creepy looking mask and was writhing and prancing about the stage as the band opened with, “Majik” from the second Ohgr album, Sunny PsyOp.

The band went heavy into the Welt (their first album) material which was an unexpected surprise as they delivered wonderfully powerful renditions of “Kettle”, “Lusid”, and “Minus” (one of the best songs on that album). People went crazy. Ogre shed the mask after the first song and spent the rest of the set bouncing about the stage and showing that even without props he is one of the most charismatic frontmen in industrial music history, if not the most. His energy level was off the charts and I’d love to know where the fountain of youth that he and Richard 23 of Front 242 have been drinking from!

A few more from Welt and a few from Devils In The Details rounded out the rest of the set. The band played around and hour but it went by way too fast. They easily could have played twice as long and everyone would have been ecstatic. Who knows, maybe they’ll come back to headline a night of a future Cold Waves, which by the way would be amazing!

KMFDM (the current Sasha led version) headlined the evening with an impressive stage set consisting of lots of fancy light rigs and a dot matrix jumbo sign. They clearly spent a lot of money on the lighting equipment and the visual presentation it provided was well worth it. They played a lot of their more recent material and threw in “Godlike” and “Virus” for good measure. The crowd ate it up like candy and there was quite a bit of crowd surfing going on during their set as well. It was non-stop energy and it sounded excellent.

The show came to a close somewhere around 1am which was pretty late for a work/school night, but it was well worth the next day’s sleep deprivation. Cold Waves VI was the biggest and best one yet and was a huge success. This yearly industrial music class reunion is easily one of the concert highlights of Chicago every year and we call can’t wait to do it again next year!