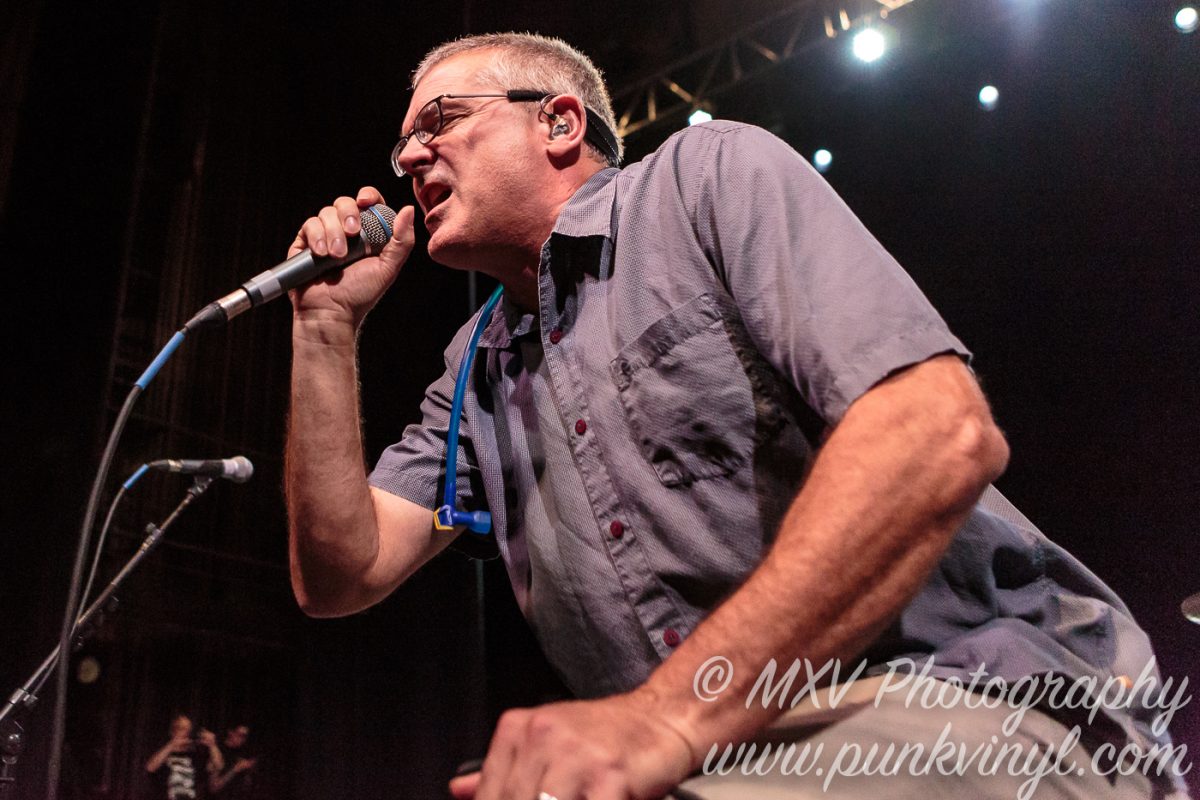 Saturday night was a big deal if you are a fan of old punk rock because it was the first time the Descendents headlined their own show that wasn’t part of a festival since they started playing together again. The band has been here as a part of Riot Fest (the world’s greatest music fest) many times, and one of the main highlights of every year they’ve played it but those with an aversion to festivals finally had a chance to see them in a more intimate setting, alongside about 2500 of their closest friends.

First up was a new Chicago band called Airstream Futures. This band features guitarist, Jeff Dean,  who is a staple of the Chicago punk rock scene of the past 20 years and has played in Dead Ending, Four Star Alarm, The Bomb, All Eyes West, and plenty others. Airstream Futures is a mid-tempo punk band with loud, punchy guitars and an energetic female singer. For being together a fairly short amount of time they all seem to play together like seasoned veterans and there’s some good chemistry going on with these four individuals. Their 30 minute set left a lot of people in the audience excited for their forthcoming début album.

The Get Up Kids have been around for a long time now and have amassed a pretty loyal following. They played a pretty solid set of their brand of keyboard enhanced emo/pop-punk. They played with a lot of energy but if one was to think of a criticism it would be that a lot of their songs seemed to sound the same. That is a fairly common occurrence that plagues this type of band. If you were a fan of the band though, they certainly delivered the goods and more than amped up the crowd before the Descendents played.

The club was hot and packed by the time the Descendents took the stage and excitement was in the air. The band has touched multiple generations of punk rock fans and a quick scan of the audience revealed plenty of old timers, some with their kids in tow, and plenty of teenagers and twenty-somethings, people who weren’t even born yet when the Descendents released the lion’s share of their discography. It takes a special kind of band to become timeless like that, one whose music speaks to people of different eras, and the Descendents are universally loved by everyone. The band is finally getting the widespread recognition they’ve deserved for 35 years and it couldn’t have happened to a more deserving group of men. These guys have always been something special, and anyone who has met them even briefly (or interviewed them for a zine) will tell you what nice, personable, and enjoyable people they are.

The crowd roared with excitement when Bill, Stephen, Karl, and Milo (quite possibly the most beloved front-man in punk rock history) took the stage. They made a little small talk then ripped into “Everything Sucks”, and the entire place erupted. Bodies were surfing in every direction, people were jumping up and down, everyone in the audience was smiling and singing along, and the Descendents were kicking all kinds of ass. They wasted no time going right into “Hope” and everyone sang so loud it was hard to hear Milo’s vocals, and even more bodies were flying in every direction. The poor security staff had trouble keeping up with all the people they had to catch and return to safety but they did a very good job.

Time seemingly had little to no effect on the Descendents ability to be one of the best live acts in all of punk rock. These guys, all in their 50’s, somehow gets better every year they’ve played since reforming a handful of years ago. They somehow keep topping themselves and the amount of energy these guys put into their live performance is awe-inspiring and unmatched. One thing that may be their secret of eternal youth is if you look at the band members while performing, they are clearly having a blast and really enjoy playing together. Bill Stevenson alone never once stopped smiling through the entire show. These guys aren’t up there just for the money, they clearly love being in a band with each other and the four men have a special bond that has allowed them to create some of the absolute best music in their genre for over three decades now.

The band rarely stopped for air and they played hit after hit. How they could play so hard for so long without stopping to rest is downright intimidating. They covered most of their discography, minus anything from Cool To Be You, and included a fair amount of songs from their latest offering, Hypercaffium Spazzinate. Some highlights of the set were: “Clean Sheets”, “Myage”, “I Don’t Want To Grow Up”, “Shameless Halo”, “Suburban Home”, “Pervert”, “Van”, and so much more. It was great song after great song for well over an hour before they ended their main set with “Descendents”. The band came back for not just one, but two multi-song encores. They included some older favorites like “Sour Grapes” and “Catalina” with a couple of newer tracks as well. “I’m the One” was in there as well and people went nuts for it and their rendition of “Bikeage” was spine tingling! When the band left the stage for the final time, they had easily played for 90 minutes. Had they played another 90 there wouldn’t have been a single complaint and there’s no doubt the band could easily pull it off with the same energy levels as the first 90. They gave us everything and still left people wanting more. Hopefully the band continues with their current level of activity and tours again next year as they still have a lot to offer in both great new songs and amazing live performances and a world with the Descendents still actively touring and recording is a wonderful world indeed!