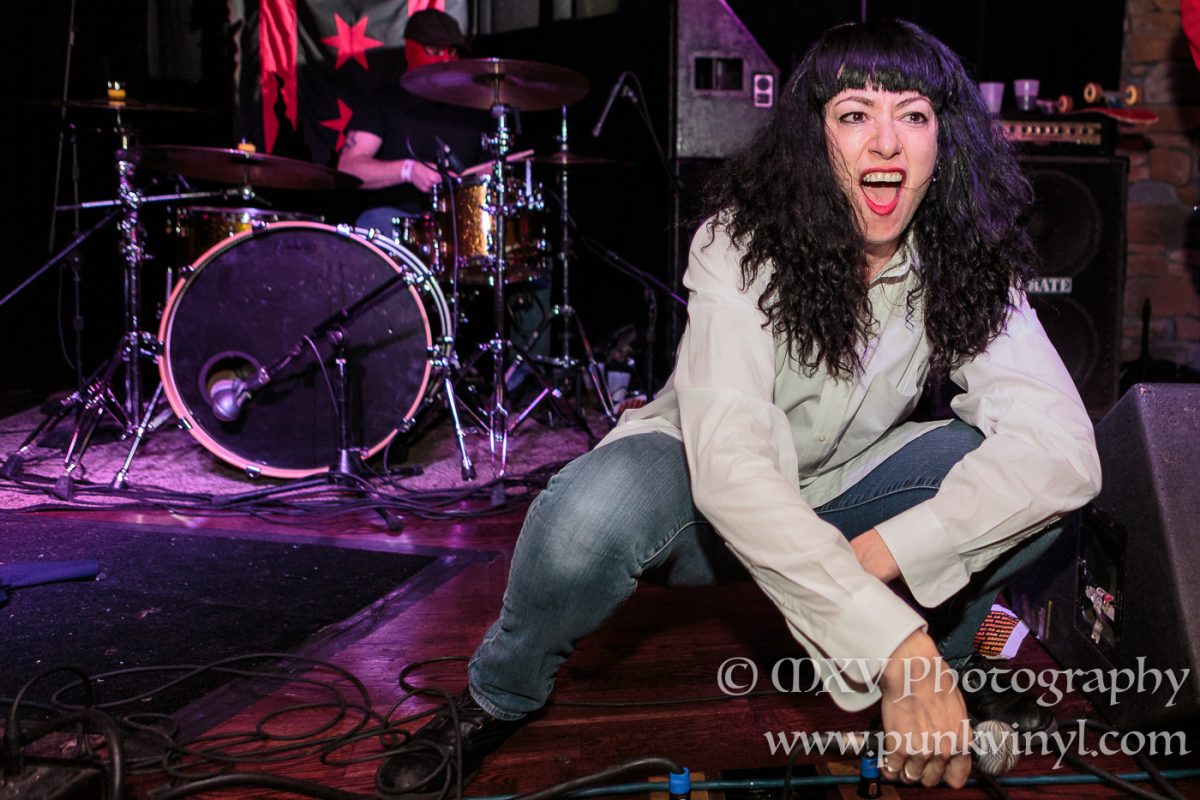 Three different generations of punk bands spread over four bands total gathered together for a show at Cobra Lounge on Friday night. The show was scheduled to be headlined by first generation Chicago punks, The Mentally Ill, but they decided to switch places and give Hotlips Messiah the top spot on the bill that evening instead. No matter the order of appearance, it was a night of very entertaining punk rock and the crowd were the real winners.

First up was Anti-Trumpz. You can probably guess the subject matter of many of their songs by their band name. While the band isn’t breaking any new ground in their style of punk rock, they play it well and more than make up for it in sheer entertainment value. They had stage decorations and their singer was a very charismatic frontman. How can you go wrong with a band that pokes fun at the worst president in United States history? Their songs were mostly short and many had some sing along choruses. Near the end of their set, Traci Trouble from Hotlips Messiah joined them on stage to sing a song with the band. These guys are well worth seeing if you get a chance and you can’t help but smile during their set. Well done!

Turbo Vamps were next. They played some pretty good hardcore style punk until they did a cover of “We Bite” from The Misfits. What an original idea, it’s amazing that no other bands ever thought to do a Misfits cover before!

Chicago punk legends, The Mentally Ill, played third. They opened with “Tumor Boy” from their first 7″ and immediately followed up with one of their best later songs, “Strike The Bottom Red”. That song has amazing percussion. From there it was a nice set of their usual material featuring demented guitar wailing and quirky sounds. The band sounded great, as did their songs. They did all three songs from the “Gacy’s Place” single which made them famous (or infamous). The band doesn’t play out very often and it is always a treat when they get together to do a show. This was no exception and it was a very good outing from these fine folks. They even did a punked out cover of “Paranoid” from Black Sabbath which was very entertaining.

Hotlips Messiah were the final band of the evening. They were all wearing various costumes (it is Halloween time after all) and Traci was dressed up as Harvey Weinstein and did her best creepy impression of him until shedding the mask and suit jacket so she could get on with the rock. “You Baby Me” got things started on the right foot and they band sounded great. They were very tight and had a ton of energy. Traci was bouncing all over the stage as she delivered her vocals and the band belted out one great song after the next. They played a lot of their more recent material that will be on a forthcoming album but they also sprinkled in some classics like “Several Species..”, “Destroy All Boys” and the set closer, “#12 Looks Just Like You”. It was a ton of fun and they left everyone in good spirits. These guys are easily the most underrated current band in Chicago and they should be a household name because they are that damn good!

It was a wonderful way to kick off a weekend Friday night at the Cobra Lounge. Those who missed out should be ashamed of themselves!