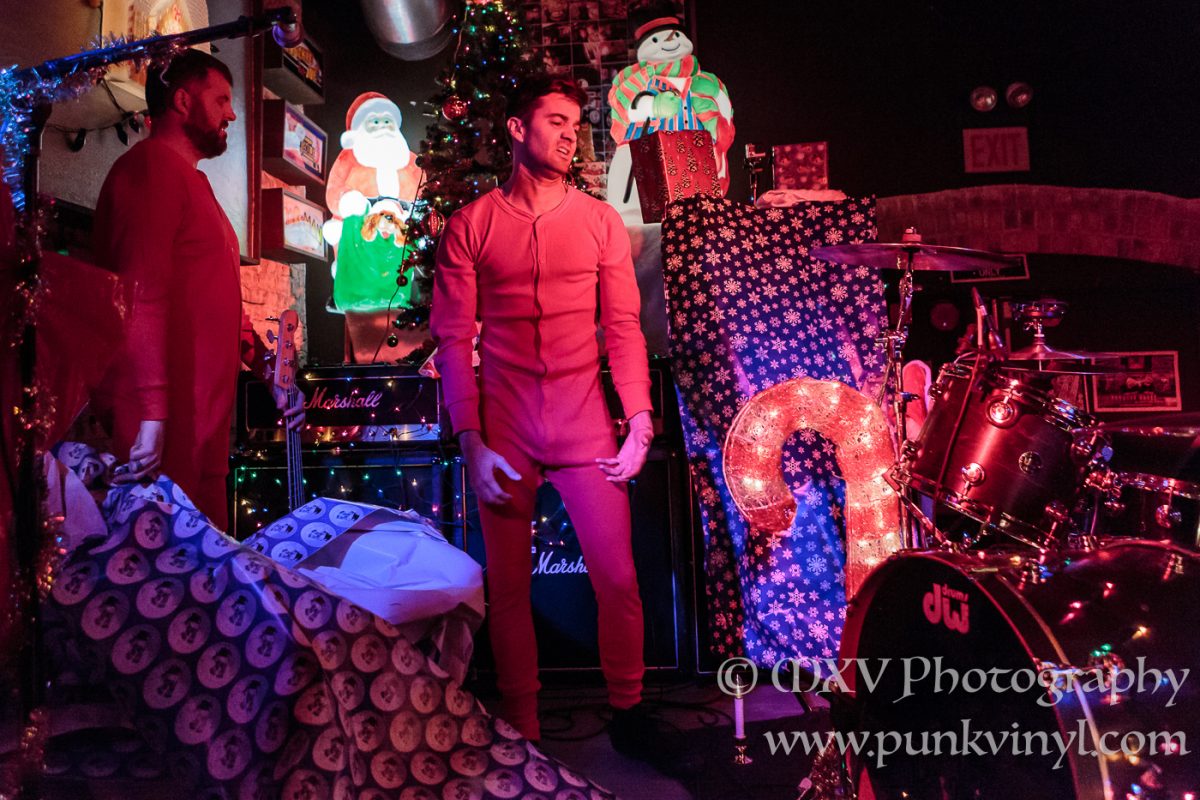 It was Christmas in October on Thursday night as Big Business made a special appearance to play a show at Logan Arcade. Logan Arcade is the best “barcade” in Chicago. It is a really nice, very large bar with three rooms and is chock full of pinball machines along with new and old arcade games. They have an amazing selection of both drinks and games, and a really great staff. It typically isn’t a place you’d find having a show but they cleared out the big room to set it up for a live performance on Thursday and Big Business was the guest of honor (and the only band playing this evening).

A DJ spun various 45’s for about an hour before Big Business took the stage. The entire stage was decked out like Christmas morning. There were wrapped presents, Christmas lights, candy canes, stockings, and a big Christmas tree. When the band showed up, they walked through the audience from the back of the room and both members were dressed in red long johns and rubbing their eyes, looking like they just woke up on Christmas morning. They walked up onto the stage and unwrapped their presents, which turned out to be their instruments. Coady’s drums were covered in wrapping paper and Jared’s bass was inside a giant stocking. The two really sold being kids on Xmas morning and it was really funny.

For those not familiar with Big Business, they are a two-piece band from Seattle, WA who play with the power and intensity of a ten-piece band. These two gentlemen also did time as members of the Melvins for a few years and that lineup was the best and most powerful version of the Melvins ever, featuring two drummers! It was a sight to behold. Big Business is Coady Willis on drums and Jared Warren on bass/vocals. They also were one of the best bands to release records on the Hydra Head label.

After unwrapping their gear and taking their places, these two men proceeded to blow the roof off of Logan Arcade. It is awe-inspiring just how big and a powerful of a sound can come from only two people, it is like nothing ever seen before. These two play like such a well oiled machine that they must be communication to each other telepathically. Coady is easily one of the best and most powerful drummers alive today. This man is a sight to behold and he hits the drums with such force that you wonder how they don’t go slamming through the stage floor into the ground below! He makes it look so effortless too and how he can keep up that pace for a solid hour with almost no time between songs is a mystery. The guy has to be a cyborg, there’s no way a human could keep up that pace and not pass out from exhaustion. Jared gets such a huge sound out of his bass and has such a great, bellowing vocal style that it too was amazing how he wasn’t winded during this performance.

The band played for easily an hour, perhaps a little longer. They wasted little time between songs and just kept belting out one powerful tune after the next. Jared had these effects pedals and one of them was hooked up to his microphone where it would record and then loop what he would sing into the mic, which added additional layers of sound to the song. They played songs that spanned over their past few records and the packed audience was loving every minute of it. There was heads banging and moving all over the place and the audience would roar with applause after each song. Smiles were evident everywhere too as the band blew everyone away and exceeded everyone’s expectations. The sound was great for that room too, whatever sound system they were using seemed to be a near perfect fit for that room and you could feel the bass and the pounding drums in your bones! During one song, they even had fake snow being shot into the room to complete the Xmas morning theme.

If you haven’t seen Big Business live or if the band isn’t already on your radar, fix that immediately! They are easily one of the best live bands you’ll see these days if you like your music heavy. Thank you Logan Arcade for bringing them in and for the early Xmas present! It was just what I wanted!