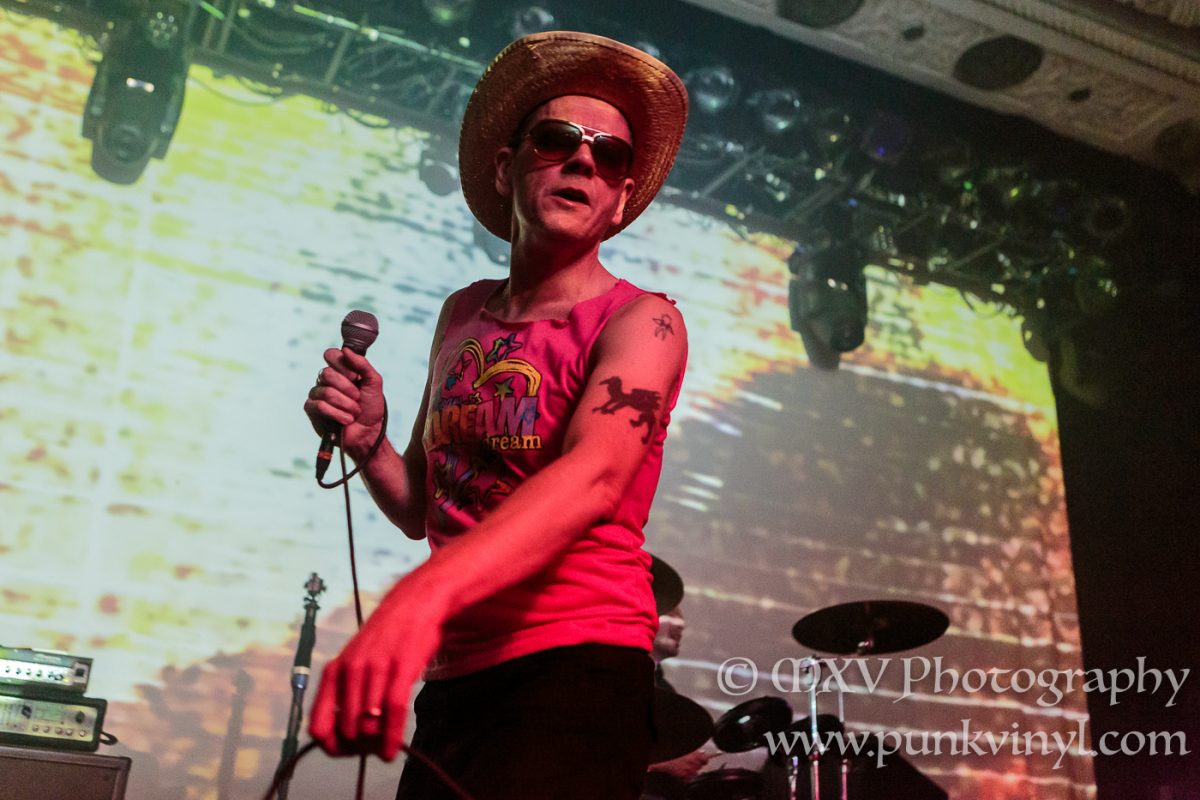 It was a Cold Waves encore Friday night at the Metro when the fine folks behind that event brought us a super double bill of Revolting Cocks and Front Line Assembly! Two industrial heavyweights shared a stage that both bands are very familiar with and boy what an evening it was.

First up was Cubanate. They played fast paced, pounding, yet danceable industrial music with raspy vocals. The singer moved around a lot while delivering his vocals and the entire band played with a lot of enthusiasm.. There was sameness to their songs but when that sameness sounds good, that’s not necessarily a bad thing. These guys got the show off to a fine start and got the crowd pumped up and moving.

Industrial music mainstays, Front Line Assembly, was next. For as good as their records are (and they are very good), this band really shines in a live setting, adding elements and power not easily captured on tape (or computer in this digital age). Bill Leeb and Rhys Fulber have been the foundation of FLA for decades now and they were joined by a live drummer and another guy on electronics, coupled with occasional additional drums by Rhys and even Bill. Bill Leeb never holds still during a FLA performance and this was no different. He was marching and stomping all over the stage. The band played around ten songs which included some old favorites in the form of “Icolate” and “Mindphaser”. A fantastic performance!

Revolting Cocks closed this show and this was no ordinary Revco show. For this special performance, they played the first Cocks album, Big Sexy Land, in its entirety, then they did a collection of “newer” songs. For the Big Sexy Land material, the band featured Richard 23, Paul Barker, Jason Novak, and a live drummer (whose name I didn’t catch). Richard 23 sang all the songs and they played the album mostly in order (but they moved the title track to open the show). Richard 23, much like he does in Front 242, was a non-stop dancing machine! How a man that age has that much energy is one of life’s great mysteries! The band played great, and the music sounded better than ever, so powerful and so fun. They even threw in “You Often Forget” at the end of that set for good measure!

Once that was completed, it was time for part two. Richard 23 left the stage and Chris Connelly came out to take over the vocal duties while Jason Novak moved over to guitar. From here it was the post-Big Sexy Land “Revco’s greatest hits” which included such amazing tracks like “Stainless Steel Providers”, “Let’s Get Physical”, “Cattle Grind” (which was simply amazing and how they opened part two), and a couple of others before ending the set with a really powerful rendition of “Beers, Steers, and Queers”. Every song sounded great, Chris is an amazing front man who has only gotten better in time, and the crowd went nuts. Old timers were reliving their youth by dancing and crowd surfing, it was nuts! The band came out for a one-song encore of “Do You Think I’m Sexy” which featured a triple vocal attack of Chris, Richard, and Jason. It was a really fun and campy way to end the evening.