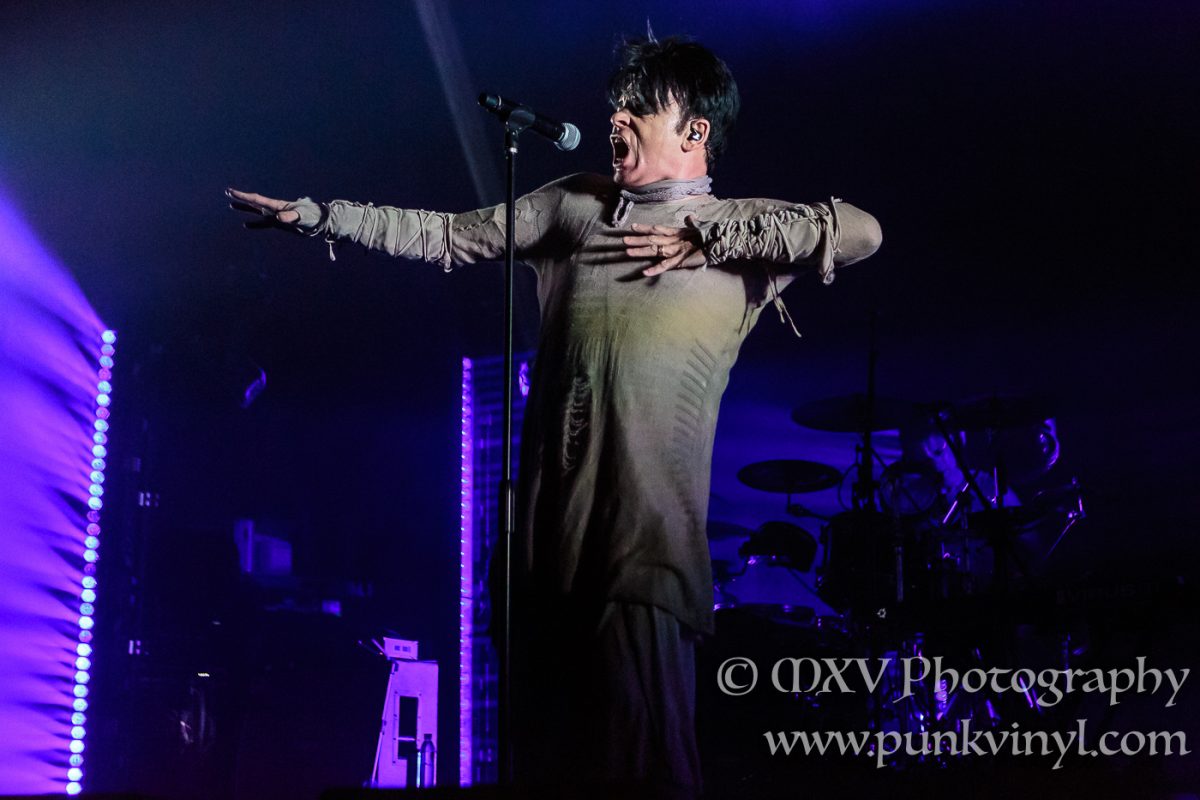 For Gary Numan’s rabid fan base, any time he tours or releases a new album it is a really big deal. Dedicated fans drive across state lines to see him perform and this year Numan fans not only got a spectacular new studio album, but Mr. Numan has hit the road to tour the USA to support it. He made a stop here at Chicago’s beautiful Thalia Hall last night with a performance that was well worth staying out late on a work/school night to catch.

Me Not You got things started with an enjoyable set of 90’s influenced, loud rock with really pleasant female vocals. A bit of shoegaze, a bit of dreamy atmosphere, a bit of noise, and a lot of rock made for a quality way to spend 45 minutes.

When the lights dimmed and the opening sounds of the into started Gary Numan’s set, the crowd was eager to see their musical hero take the stage. Smoke and flashing lights filled the stage as Numan and his band took the stage dressed in outfits similar to the attire that Numan is wearing in the artwork for his latest masterpiece, Savage. It is an interesting look that is different to the attire he’s been sporting on recent tours. There were flashing, pulsing, and strobing lights everywhere, creating a really cool atmosphere for the unique style of music that Gary Numan helped pioneer and is still the master of.

The band opened with “Ghost Nation” which is the opening track of the new album and a sensible way to start a show supporting it. For as great as the song is on the album, being played live adds elements and a much bigger punch than can be captured in a studio and that is the case with all of Numan’s music. The live renditions with a band accompanying him adds that extra “oomph” that is unparalleled and it just leaves the crowd in awe. Nowhere is this more evident than when the band quickly segued into, “Metal”, a longtime staple of Numan’s live set that is from the acclaimed, The Pleasure Principle album. The hypnotic, repetitive electronic churning hits right in the gut with a punch and layer of low-end and heavy percussion that you can’t find in the grooves of the record. As the band delivered song after song, Numan was very animated, dancing, posing, and commanding the undivided attention of the audience, occasionally stopping long enough to crack a smile. It was clear that he was really enjoying what he was doing up there and feeding off the appreciation of the audience.

The setlist featured many songs off of Savage, along with a few from its predecessor, Splinter, with older hits from Replicas and The Pleasure Principle sprinkled in throughout. He played the obligatory rendition of “Cars” and again it packed a punch and a cool low-end groove that put a bit of a modern spin on the old classic that made him famous.

After close to 90 minutes of amazing songs, sounds, and visuals, the ban briefly left the stage before returning for a two song encore of “ME” and “Are Friends Electric” which was as perfect of a Numan encore as you could wish for. Gary Numan and his band delivered the performance of the year in Chicago last night and he topped his already high standards of his live performances of the past decade proving that at 59 years of age that not only can he can still produce new music and perform at a level higher than most musicians half his age, but  that perhaps the best is still yet to come.