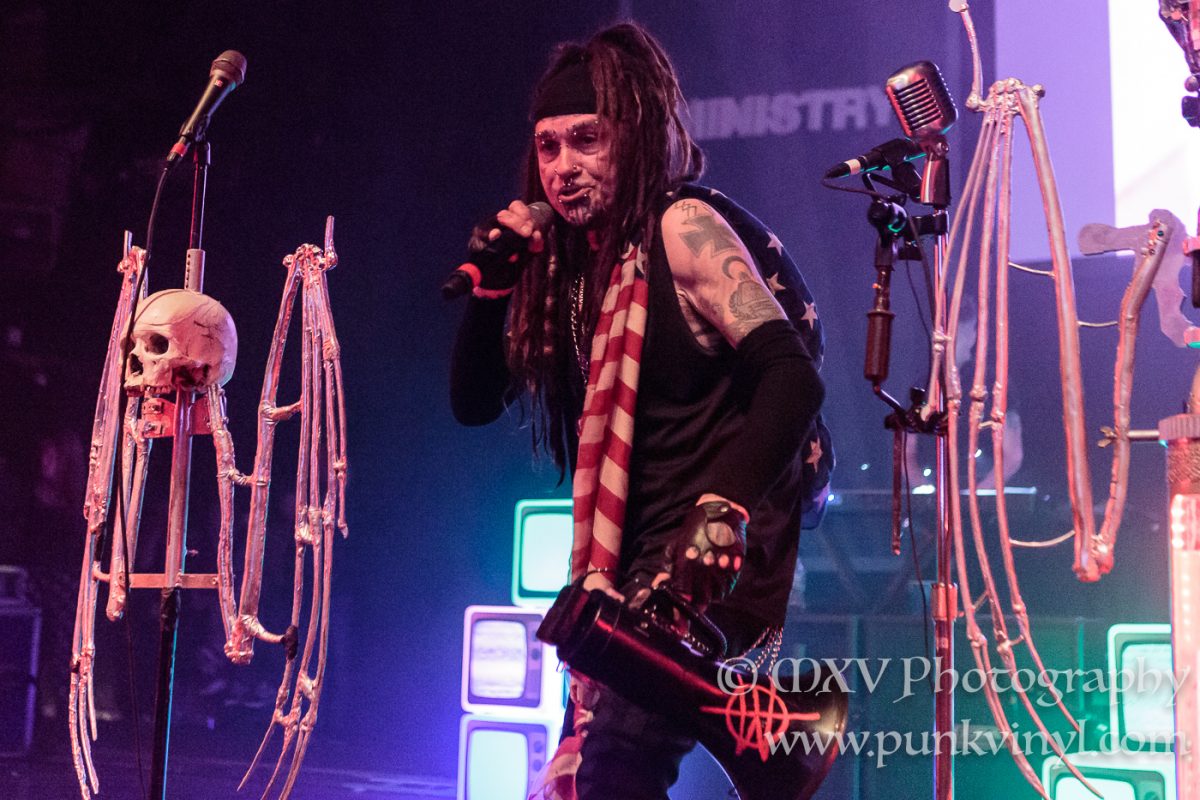 Saturday night, Ministry made their return to the city that Al Jourgensen called home for over three decades to headline a show at the Riviera. Anytime the band comes to town it is a big deal and this time was no exception. It even included one big unexpected surprise!

The God Bombs was the first band of the night and they ended their set doing a cover of a Ministry song… at a show they were opening for Ministry. Does it get any more bush league than that?

Chelsea Wolfe was anything but bush league, in fact she and her band were fantastic! Chelsea sings and played guitar and was backed with a full band. The music was a really great blend of elements of gothic rock and metal. Is gothic doom metal a recognized genre of music? If not, it should be. Some post punk elements are thrown in there too. Chelsea has a great singing voice and the music covered the ranges between heavy and beautiful, dark and moody. The entire set was captivating and this act should be headlining tours of their own. The audience seemed quite appreciative of Chelsea too as she got an extremely warm response the entire set.

Just a few short years ago after the untimely passing of Mike Scaccia, Ministry did a “farewell tour” and planned on calling it a day. Much like retirements in professional wrestling, never say never when it comes to bands retiring. If you don’t believe me ask The Who or Kiss. In Ministry’s case it only took Donald Trump getting elected as president of the United States to give good old Uncle Al the inspiration he needed to pick up the guitar and put pen to paper and start writing songs again. Some of Al’s most inspired and prolific output in the post-Paul Barker years came as a result of the Bush presidency. It makes sense that with the current regime, Al would get fired up again and have a lot to say. Many would agree that the country needs Al’s voice in times like these and the fact that Ministry’s newest album, Amerikkkant, is the most solid Ministry release in quite some time.

Ministry has always been good in a live setting but the time off, some new touring personnel, and the time off seemed to have breathed new live and electricity into the band because the energy and the power the band performed with on Saturday night rivaled the band’s last decade’s worth of shows. Al seemed to have found new inspiration and the quality factor was upped all across the board. The addition of DJ Swamp puts a nice little twist on the band’s live sound, especially when playing past material.

The band opened the show with “Twilight Zone” off the latest album and proceeded to play about 2/3 of that album during the main part of their set. The sprinkled in some other more recent tracks such as “Lies”, “Senor Peligro”, and “Punch in the Face” as well. Al introduced a special guest, his old friend Burton C. Bell of Fear Factory who sang two of the songs this evening. That was a nice touch and Burton did vocals on Amerikkant as well. Al and Burton’s dual vocal delivery added another layer of intensity to those already intense songs.

Towards the end of the main set, Al thanked the crowd for being good sports about them playing all the new stuff and said as a reward they would now play some old favorites. This started with “Just One Fix” which sounded excellent but they quickly laid waste to that with an even better delivery of “N.W.O” that had the entire audience on their feet and going nuts. They topped themselves off again with an extremely powerful performance of “Thieves” too!

If that wasn’t enough, Al said he had a special surprise for his hometown crowd this evening and boy did he. Al introduced Chris Connelly and said it had been close to 18 years since the two played together. The crowd was equal parts stunned and excited as Chris took the stage and joined Al and the band for “So What”, which is one of the most popular tracks on The Mind Is A Terrible Thing To Taste. Seeing the two frontmen side by side brought back so many wonderful memories of the Ministry of the past for the old timers in the audience and quite frankly it was spine tingling hearing these guys perform it again.

The band left the stage to a massive round of applause and had they just called it a night there people would have easily gone in happy, but they didn’t. Instead they came back out for two more songs in an effort to make people even happier.  First up was “Bad Blood”, from Dark Side Of the Spoon which probably hasn’t been played since shortly after that album was released. That was a nice and unexpected selection as it is one of the best songs from that underrated Ministry album, then the band ended the evening on another high note with another live favorite, “Psalm 69”. Closing the night with a powerhouse of a song after over 90 minutes of a high energy performance.

If you are a Ministry fan and have written off the band on recent years you definitely want to revisit them on this tour, the newfound energy and enthusiasm translates into a great live performance more than worthy of your time and the new material sounds really good in the live setting.  It was a fun evening with good old Uncle Al.