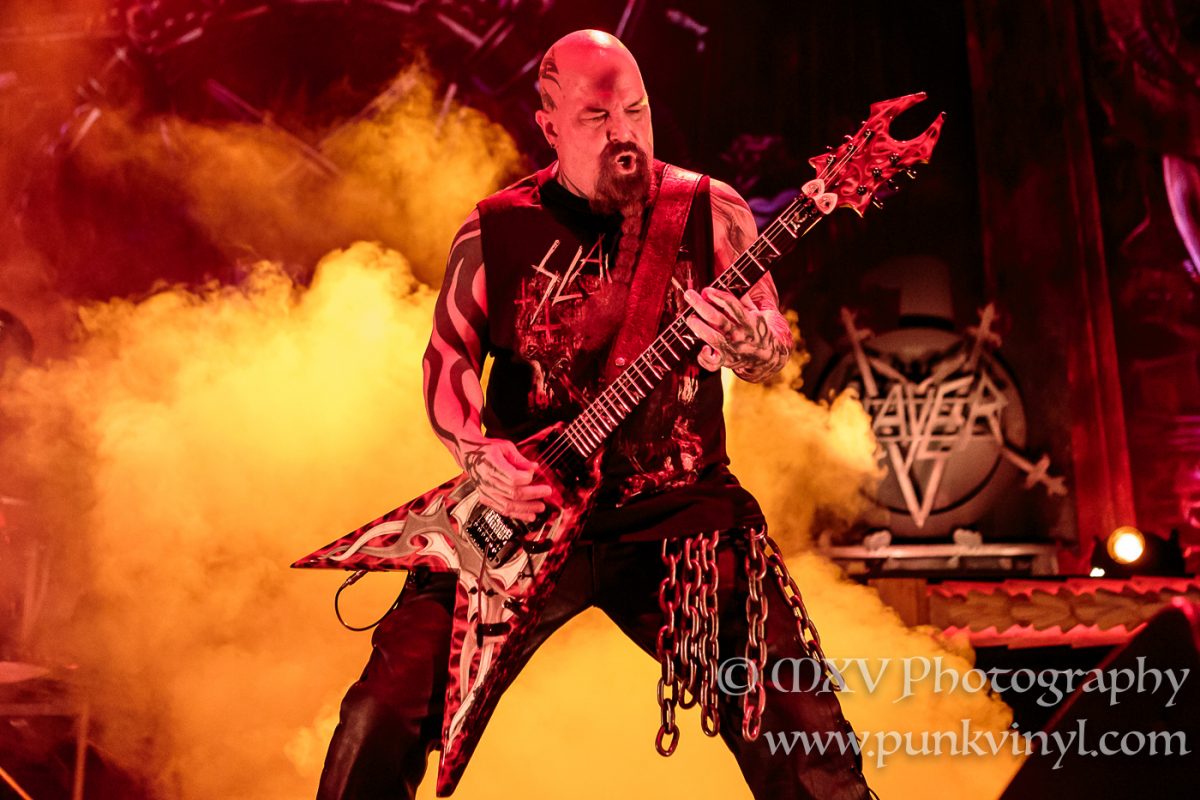 Friday night was an amazing night for metal fans as Slayer headlined an amazing five band bill at the Hollywood Casino Ampitheater. Slayer was joined on this tour by Lamb of God, Anthrax, Behemoth and Testament! You couldn’t ask for a better lineup and you couldn’t have asked for more beautiful weather for an outdoor show!

Those who were able to get to the venue early were treated to a rock solid set by Testament by all accounts of polling various audience members.

Polish extreme metal legends, Behemoth, took the stage next. The members were all painted up with corpse paint and looked menacing even though the sun hadn’t set yet. Their microphone stands were large, ornate, gothic looking structures which made for a really cool atmosphere. Band leader, Nergal, looked to be in better shape than ever and he is a man so powerful he seems to have overcome a very serious, life threatening illness in order to continue doing the good work of providing the world with some amazingly heavy and brutal sounds. The band was in top for this evening and got the crowd going big time. The crowd chanted along every time Nergal raised his fists and a pretty sizable pit formed too in the part of the crowd that had no seats. The band played 35 minutes and were relentless in their brutality. They could have played for an hour and no one would have complained and they’d probably still want more. These guys are absolutely worth seeing if you get the opportunity and are a fan of extreme metal music.

Anthrax was next and much like the past few years of them touring, they delivered another grand slam of a performance. When you open up your show with one of your best and most beloved songs, “Caught In a Mosh”, you really set the bar high and they raised it with each successive song they played. These long time thrash metal veterans seemed to have found a second wind this decade because every tour they just become better and better. They were always an amazing live act but instead of slowing down, they are constantly topping themselves as one of the best live metal acts around. Their 45 minute sent went by in the blink of an eye and they really should have been given an hour. In fact they should have been playing right before Slayer as they are that damn good. Their set list consisted of, “Caught In A Mosh”, “Got The Time”, “I Am The Law”, “Evil Twin” (the only new song they played), “Antisocial”, and “Indians”. That’s about as perfect of a set as you could ask for given the short set time.

Lamb of God was the final act before Slayer and they delivered an hour of non-stop, full speed, mayhem. They kind of blend thrash with grindcore, hardcore, and more and play at one speed, fast! The band pummeled their instruments as singer, Randy Blythe growled and screamed his head off. Randy never stood still for more than a few seconds and many times would take flight by leaping off the riser in the front center of the stage or even the higher drum riser behind him. Most of the crowd seemed to love them and they sounded really on point this evening.

While a Slayer show is always a big deal for longtime fans, this one was bittersweet because this would be the last time these 35 year veterans would be playing here. Slayer announced earlier this year that this will be their farewell tour and the band is retiring. While it was inevitable that this day would come, it didn’t seem real as the band has gone over 35 years without slowing down and without once putting out a bad album (which is extremely rare for any band). The band has been a heavy metal machine since their first release back in 1983 and they are one of the greatest heavy metal bands of all time. Slayer has also been an incredible and consistent live band and they didn’t hold back on their final Chicago performance. The stage consisted of multiple backdrops that changed throughout the set and a constant stream of pyro that shot in various directions and was so hot you could feel the heat in the middle of the pavilion. During the first third of their set, the center backdrop was the traditional slayer pentagram logo and the pyro actually shot in the directions of the pentagram segments. It looked very cool, as did the backdrops which had some interactive lighting too that made cool effects like glowing images that appeared when hit with a black light. The visuals alone were very entertaining and they really complimented the amazing onslaught of power the band were delivering on that stage.

After a dark intro and the curtain dropping to reveal flaming Slayer logos, the band took the stage to the roar of over 25,000 people who were waiting all night to see their thrash metal heroes one last time. The band opened with “Repentless” and they were spot on. The band wielded their instruments like top surgeons as they delivered one powerhouse after another with very little time wasted between songs. Lead singer/bassist, Tom Araya, at times looked genuinely moved and emotional as he looked out into the crowd, knowing this would be the last time he’d see them in this city and was moved by the incredibly loud applause they received song after song. He went between looking like he was going to tear up to smiling like a kid on Xmas morning throughout the entire set as he’d stop briefly to thank the audience or announce the next song. He didn’t spend a lot of time talking and the band instead just fired off one song after another, played to perfection, while making it look effortless.

The band did an admirable job representing most key points of their 35 year discography and touched on many fan favorites. Long time staples such as “Raining Blood”, Post Mortem”, “War Ensemble”, “Seasons of the Abyss” and “Hell Awaits” (complete with some amazing looking fire on stage) were played alongside more recent songs and they even went way back to the beginning with “Chemical Warfare”. The band played a full 90 minutes before finishing the show with “Angel of Death” which was as perfect of a finish as you could ask for. They didn’t leave the stage and come back, they instead just played their 19 song set from start to finish with no breaks and then put down their instruments, thanked the crowd, and said a nearly tearful goodbye. The crowd was sweaty and exhausted and everyone seemed equal parts happy with the amazing set and sad that this would be the last time they’d get to see the band play. It was one hell of a send off, capping off a career that lasted nearly four decades. Slayer will be missed by many, but they are going out on a high note and they can put down their instruments knowing they had one of the best and most consistently great runs in music history.

Thank you Slayer for 35 years of amazing music and amazing shows. You are heavy metal super heroes and one of a kind!