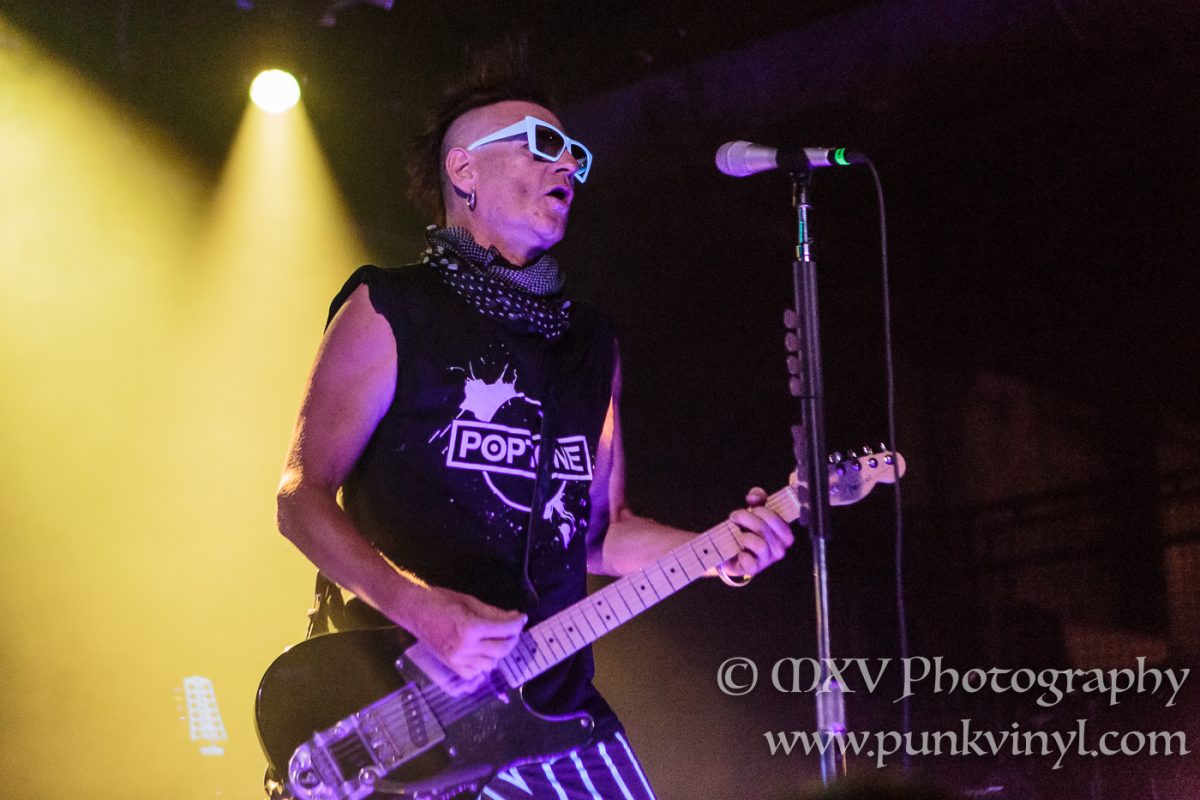 If you were a fan of Bauhaus, Love and Rockets, and Tones on Tail, the Concord Music Hall was the place to be on Thursday night when Poptone headlined a three band bill. All the rain just meant all the more reason to seek shelter in the nice club and be treated to some excellent music.

A local band named Replicant was the first band of the evening. They were a darkwave band with catchy, danceable rhythms, driving keyboards, electronic percussion, and brooding, subdued vocals with echoed effects. They played about a half hour and were pretty enjoyable overall as they performed in a constant cloud of fog machines and flashing lights.

Next up, hailing from Los Angeles, was Automatic. This three-piece, all female band delivered some wonderful sounding post-punk/experimental music with lots of keyboards and percussion. All three ladies shared vocal duties during different songs or portions of songs and every song sounded great. The audience seemed to really enjoy them and hopefully they’ll come through town again as they are well worth checking out.

Poptone were next. For those not familiar with who Poptone is it is the new project of Daniel Ash and Kevin Haskins of Bauhaus/Love and Rockets/Tones on Tail fame on vocals/guitar and drums respectively, joined by Haskins’ daughter, Diva Dompe on bass. When the took the stage, aside from having the sides of his head shaved so he had a big spiky mohawk, Daniel Ash looked pretty much exactly the same as he did back in the Love and Rockets days. Not only has he aged gracefully, his voice aged exactly zero percent and he delivers the same buttery smooth vocals that he always has!

The band started things off mellow and slow with “I Feel Speed” (a Love and Rockets song) and then picked up the pace with a handful of other Love and Rockets classics such as “Haunted When the Minutes Drag”, “Mirror People” (one of the greats!), and “All In My Mind”. A handful of Tones On Tail material followed, starting with the haunting and awesome, “Movement of Fear” complete with Daniel Ash Saxophone accompaniment! The rest of the main set was heavy on Tones on Tail material but had a couple of Love and Rockets songs sprinkled in here and there. The band sounded great, Diva was a great bass player, and seeing two alternative music legends on stage playing a nice selection of their past music was a real treat. The band ended the main set with “Ball of Confusion” that had most of the crowd dancing along.

After a short break, the band came out for a multi-song encore that started with the only Daniel Ash solo composition of the set, followed by the old club favorite, “Go”! That one had the most people dancing of the night, hands down.  They did one Bauhaus song, “Slice of Life” and then ended the show with a really great rendition of “Yin and Yang (The Flowerpot Man)” that featured a mid-song guitar change by Ash as he switched between acoustic and electric for the different sections of the song. It was a hell of a strong way to close the show and they left the stage and a very happy and satisfied crowd left the club smiling. It was a rock solid set, and a great retrospective of these musicians’ amazing legacy.